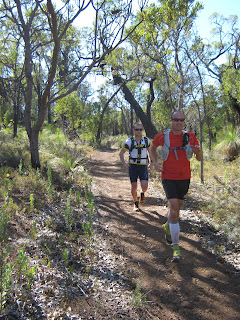 Fantastic weekend. I had three takers for Day 1 of my 2-3 day Bibbulmun gear-testing weekend. It's quite remarkable to me that I can find 3 mates to come out on a 40 km/6hr trail run "for fun."

We tackled a section of the Bib that's difficult to access. I dubbed it the "commitment zone." I think it's the longest section of track where you can't get a vehicle to it. For 40 kms, there's no way out except your own two feet (or maybe someone else's two feet if you can get a piggyback ride). It took some time to set up the car shuttle - leaving a car at one end and driving to the start along corrugated gravel roads. Rolf's rearview mirror actually broke off.

We were finally running at 8.30 AM. And arrived south at the car 6hrs and 42.6 kms later, thanks to a few bonuses due to missed markers. About 45 minutes of our total time was spent getting water and faffing about at shelters. Showing the true trail runner spirit, one of the guys expressed his joy at our two mis-turns, so that we could technically claim an ultra ;)

After waving goodbye to the guys, I turned around and ran (term used loosely) another 10k back to one of the Bib shelters for the night. Total 1415 mtrs elevation gain for the day. With my 9 kg pack and all our water stops, etc, it was nearly an 8 hr day.

I inhaled my entree (pb & jam sandwich), washed the worst of the sweat off, and put dry clothes on right away so I didn't get a chill. Then I set up my Hennessy Hammock as the sun went down. Then it was time for dinner. PB&J bagel and an orange that I had laboriously carried 10k back from the car to that camp.

Over the course of the day I learned several things that are helpful for my end-to-end attempt in October. Things like:

- an eTrex unit with the route loaded is useful, despite the weight, as it saves you wasting energy going back and forth on the track, doubting yourself. Especially, I think, after several days solo when I'm truly shattered.

- my pack (female specific UD Speediva) isn't narrow enough at the waist. I've always had a problem with packs this way, but was sure the female specific would solve it. I was wrong. Cinched as tight as possible, I still couldn't shift enough weight on 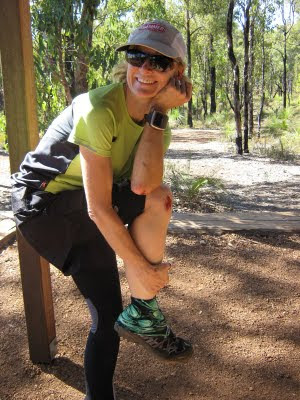 to my waist, so my clavicles copped it big time and are very bruised.

- I should pack my mobile phone in soft stuff, so that if I have my triennial massive stack, I won't damage it (mind you, I should be good til 2014 now).

- don't assume my favourite shoes in a size 0.5 bigger are the same shoes at all. They rubbed my lateral malleolus (pokey-out ankle bone) and created a huge swollen mass, still painful today. I measured the shoes and it so happens they changed the model just slightly between the two pairs I have, so that these new shoes are 1 cm higher along the sides. Another day on the trail and I would have had to cut the edges down and duct tape them.

- carry Deet for ticks. I found a tick nymph crawling on me on the way home and have already broken out in 3 more bites (they take a few days for me to react and then I itch for about a week).

- if my fuel is not readily available, especially when travelling with others, I will not eat.

Back to the night ... I also discovered that it doesn't really matter how many layers I wear, insulation works by allowing small bits of trapped air to hold heat against one's body. So when I laid down in the hammock on my back 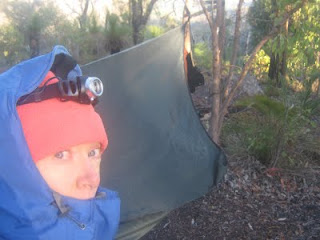 I was wearing tights, Icebreaker thermal bottoms, and Patagonia rain pants below and sports bra, Icebreaker thermal top, TNF fleece, and Montane water proof jacket above. I also wore a fleece beanie and gloves. I wore my Injini socks and down "ski hut" booties. I actually slept with my headlamp still on my head - there was really no reason to take it off. It wasn't in my way.

Twice during the night I had to go outside and do 5 minutes of cardio to re-warm my system (the second time I grabbed my space blanket to try, to no avail). I'd crawl back into bed toasty warm but would immediately feel that cold hit me where my body touched the hammock. Glad there was no one around except the roo 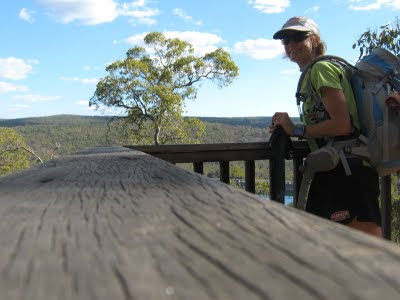 Day 2 I ran/walked 36kms for another 1000 mtrs gain. Since I knew I wasn't staying out overnight again (nothing else to be learned from that!), I texted for a lift home.

Time to recover and get back into the speed work now.
Posted by Bernadette Benson at 8:19 PM