The Price to Pay

4 hours sleep. Another race done and another night of minimal sleep! It's so crazy what my body does after an event. Even just a 4 hour race, held first thing in the morning, and I have to go through "jet lag." I slept from 10.45 PM - 2.45 AM. Laid there until 4 AM and was just bored. My heart rate at bed time was same as always, so my endocrine system didn't take a big hit. Yet I obviously still had an assortment of extraneous chemicals running amok. 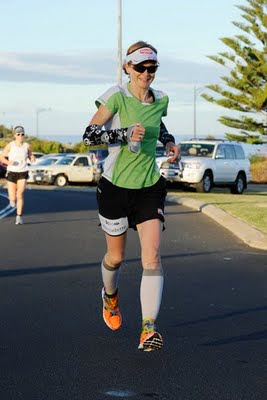 I tried to roughly tally the carbohydrates I ingested on Saturday, following the UWA alt-carb loading plan. As I wrote in the last post, I don't stuff myself to the point of discomfort, though. And I'm not a young male athlete with an average VO2max of 56 as in their study. They ate an average of 275 g/carb per day. I am lighter than those guys, so I eat about 200 g or less of carbs/day (approx 65% of my daily cals). The programme suggests that the guys should consume 4.6 g of carb per pound of body weight when loading. For me, that's 500 grams (4.6 x 110). When I calculated what I ate Saturday, I estimated I got about 320 grams. However, if I say that the guys consumed 80% more grams of carbs than usual (500/275), then I would be looking for about 360 grams for the day (200g x 1.8). So, all in all, those are numbers that I can live with.

The new Bunbury marathon/50k course is a great improvement in scenery to me. The half marathon loop divides nicely into sections, which gives the whole thing a more manageable feel, mentally. It certainly does have a huge number of twists and turns, particularly through a "cafe strip" section. My pace typically fell about 5-8 secs for that km, which had to be negotiated 4 times for the marathon distance. But it was worthwhile to me because of the crowd support through there. There were people sitting and cheering for hours on end - I saw many of the same people there all morning. They were great, calling out to us by name (which were on our bibs). For just those few minutes, I would imagine I was in Europe every time I passed through that section. Plus, the twists and turns are great fun for a trail runner - you had to apply a 30 degree lean at times. I took one turn a bit close at the 40k mark, though, and smashed my hip against a bollard. Ouch! But that just gave me something else to think about for a minute. Nicely bruised.

And despite the swirly race route, there were lots of PBs on the course. The weather was perfect. Probably 8-10 degrees at the start with minimal wind. Max temp might have gotten to 19 degrees, but then the clouds came over for reprieve. I carried a sponge, but only started to think of using it when the clouds came in.

Based on my predictions, I knew I had the potential for an approximate 4 hr race. A glance at the Canadian records showed me that the W40 50k record was 4.02.09. So I connected with the race director to confirm that the 50k course was accurately measured, as I might hit a record. He was brilliant. Despite having a race building to approximately 500 people (half, relay, marathon, and u 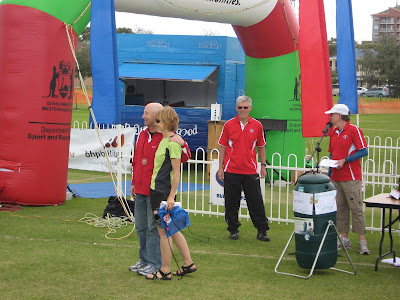 ltra), he was able to work with his course measurer to confirm that they had a course I could use. Now it was just up to me to not let him down after all his efforts!

I hit the 10k about 45 seconds early, the half at 1.39.40, the 30k at 2.22 (2 mins in the bank), and the marathon at 3.20.05. My chief complaint was my quads. With my adductor enthesopathy recovering still, I am hesitant to wear my Compressport quad guards to race, so only wore the calf guards. (Quad guards and recovery socks worn all evening and all night in bed though!) I didn't get into the "business end" of things until the marathon mark, which was fantastic. Then I just focused on one km at a time.

I ran with Perpetuem solids for the first time. I needed 15. That's 33 cals per solid or 132 cals/hr. Same as what I do with the liquid formula for hard racing. I ate one every 15 minutes and did an Endurolyte every 30 minutes, even first thing when it was still cold. I burned 900 cals/hr according to Garmin.

The solids were great. I kept 4 or 5 loose in my Race Ready shorts (amazing pockets) and the remainder were in a ziploc. That was good because the moisture in the air actually made the solids get a bit sticky after an hour. I wouldn't want 4 hours of loose solids. They'd turn themselves into the liquid form.

I carried a tiny 300 ml Nathan handheld. I've always disliked handhelds, but knew I couldn't afford the weight of a hydration pack. This one was great because it hooks through the thumb so that you don't actually have to grip the bottle. I could still manipulate things with my fingers (e.g., getting electrolytes out of my pocket). 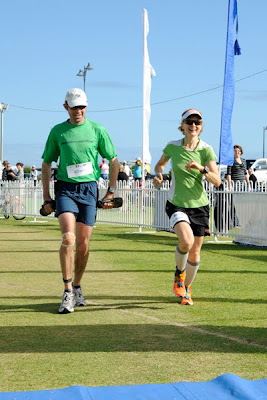 dipping into my hand held supply until after the half way mark when it got hotter. Then I used both - gulps at the aid stations plus sips in between. I had to refill at the 40k point and then the 47k point to make it to the finish. I had a brief spell of slight nausea around the 44k mark, but was able to beat it by easing off the pace by 8-9 secs/k for a couple kms and taking more sips of water. I think it was a bit of dehydration/overheating starting, as there was no aid station for 7k. They said there would be one at the marathon mark, but I don't remember it being positioned where the 50k'ers could access it when they came through.

Thanks to my running mates for the camaraderie and great laughs in training and to everyone else who's given me encouragement along the way. Even the girl on the course Sunday who yelled, "I love your orange shoes!" (I do, too).


A Note on the Beetroot Experiment:

I still think beetroot is an excellent performance aid, but I'm going to use it more sparingly now. In the past week, I started to develop an aversive reaction to it. Instead of finding it palatable, if not even slightly enjoyable, I began to feel nausea at the smell of it. Then after consumption, I would feel a bit of nausea. On Friday I could hardly choke down 100 mls, but thought perhaps it was because I was no longer peeling the beets (just scrubbing them). On Saturday I just had 100 mls, which went down all right. But 2 hrs later, driving to Bunbury, I suddenly felt nauseous. I broke into a sweat. I groped for a bag in the back seat while Rolf tried to figure out what to do. I felt myself about to black out, losing my peripheral vision and getting that tinny sensation in my hearing. Well, I'll skip the other details of the roadside stop, but suffice it to say that I think I developed a bit of beet toxicity either due to excess iron accumulation or perhaps related somehow to betaine accumulation (the alkaloid found in beets). I wonder if the beet researchers are interested in a case study ;)

Interestingly, I went back to old posts to see when I started beetroot - 24 March was my post on the topic. So that's 2 months. And I love my caveat:

...if you also decide to take on the beetroot experiment, I want you to appreciate there's still a factor of "we don't know if anything bad happens to humans after long term supplementation with high nitrate foods" in the literature.
Posted by Bernadette Benson at 3:09 PM