Trail running and track running never mixed. Or so I thought. At least I certainly never had an interest in doing a track race. But in western Canada I was never exposed to the track. In Australia, it's a different story.

After the Bunbury 50, I got curious. What else could I do? Bungy jump? Sky dive? Walk across a bed of hot coals?

Well, how about a 24 hour track race?

It was a hard sell to my pretty new partner, who only six months before had never even heard of ultra running. But once he wrapped his head around the fact that I was serious about it, we set out to plan the event. Both of us have quite scientific and technical minds, so we were a perfect team. And racing on track is probably the most “team oriented” of all ultra running events.

I had a six-page document for him to work from. It detailed my fuel and hydration plans in 15-minute increments for 24 hours. It also detailed electrolyte consumption, mileage plans and paces, and had a place to note any intake of caffeine, painkillers, and other incidentals.

In addition, I had created a “road book” which detailed the point-to-point run I was doing in my head. My plan was to run from my old home in Calgary to my old rural property, which was 200 kms north. I had three goals: (1) break the Canadian women’s 40-44 age group 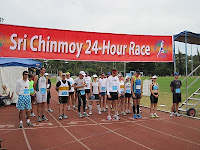 At 9 AM, I was off in a field of 23 24-hour racers and eight 12-hour racers in nice mild weather – a forecast high of 21 degrees. At 1 PM ten 6-hour racers joined us. The other excitement at that time was that we got to change directions. Every four hours we changed. Woo hoo.

I’m a social runner when training, but have always been quiet while racing. So I was a bit concerned I might appear standoff-ish to the group on the track. Many seemed to know each other, as most were from the eastern states and had raced together at different venues before, some on trails, as well.

I ran solely on Hammer Perpetuem. An experiment, but one based on good science. I took electrolytes at regular intervals. I never touched a pain pill. I felt a few waves of nausea during the event, but it was nothing compared to what I saw the majority of people go through. Several vomited numerous times.

At 6 hours, I planned for 58 kms and was at 60 k. I hit the 100k mark at 10hrs 24 mins, about 3-4 kms ahead of schedule. I had to be careful not to get behind, but also not to get too far ahead of my plan, either, or that would imply I’d tax my body too much too soon. Every 5k I did some high knee skips and butt-kicks, until that got too tiring. Then I did a one lap walk break instead.

It got dark around 6 PM. People came and went from the track – racers having to retire early with injury or illness – one fellow getting a free ride with the medics to the hospital. A sick part of me felt jealous watching him reclining on that warm stretcher in the ambulance, although I knew he’d happily trade places with me to be back out on his own two feet. I switched from a singlet into my long-sleeved Trailtrash shirt for a touch of connection to my running roots in Canada. I was also wearing a “frog” necklace, as the frog is Trailtrash’s unofficial representative animal.

In so many ways, I had it good. Crews were standing still in the 7-degree clear skies freezing. Many other racers were hobbled with nausea, blisters, and cramps, which reduced their paces and allowed the cold to seep in to them, as well.

I hit 100 miles in 18 hrs 17 minutes, still 3 kms ahead of plan. Around 5 or 5.30 AM, the kookaburras started up their cackles in the trees. They sound like monkeys. The sun came up around 6 AM. Just after 7 AM, I broke the Canadian record. A few of my Oz friends found the exact spot on the track and met me there to cheer me past. I was still ahead of schedule. But my mind broke a little at that point. I was tired and it was tough to keep running while watching so many others around me walking. (Most would have rather been running, but were too plagued by various leg or gastro issues to be able to). I found myself thinking that everything else I did was just a “bonus” after that point and was quite prepared to let the 200k goal go and “settle.”

Fortunately, the Sri Chinmoy race organisers had been keeping close tabs on me and noticed the slip in my pace. They were keen to see a racer get to 200k; several of the strong guys had been forced to retire early. With about 45 minutes to go, my current lap counter commented on how near – yet far – the 200 k goal was for me. I had used up my bonus kms and was getting close to going into deficit. My right knee started twinging for brief moments. When it did, it would make my leg feel like it was going to give way. To be expected after the repetitive firing of the muscles non-stop for 23 hours. The nerves were just getting confused – fire, release, fire, release, fire, release, release…whoops!

Everyone got behind me in a big way. With 15 laps to go, I put the push on. I just wanted to get the 200k, get the pressure off, and enjoy the last few minutes to walk it out. I hit 200k with 7 – 10 minutes to go. And from there I basically enjoyed a walk and cheering on the other racers who were pushing to their own goals. I had a new Canadian record, 200k, and an outright win of the event. I believe somewhere around 9 PM I had taken overall lead and never lost it. I tried not to pay attention to that. In fact, when my partner told me my standing, I asked him to stop. My race was never about winning or beating anybody else. Although a win is a lovely personal thing to achieve, it’s incredibly bittersweet out there on a track. Every few minutes you pass the same people and you see and appreciate everyone’s struggles. You see their pain. I wasn’t motivated to win while looking at those struggles. I was inspired by everyone out there. People leaning over to vomit, then standing up and moving on. Walking with bleeding toes with the tops cut out of their shoes. Going to the hospital for an IV and then coming back to continue racing 9 hours later.

My push at the end finally taxed my system, too. I had an 11,000 calorie deficit by then. I was running mostly on fat stores, so pushing to run hard at the end was a lot of ask. About 10 minutes after the finish, I sat down and then slowly tried to take in a few bites of banana. I thought it would help to try to keep my stomach “open” and receptive to fuel. No go. My right knee (the non-surgery one) seized up after sitting and I couldn’t load bear on it. When I stood, I got dizzy. I couldn’t stand to get my award. I started going into shock. Despite having three shirts on, I was shivering. Fortunately again, I had brilliant support from the wife of another West Australian racer. She had crewed her husband through years of world championship events and knew exactly how to help me in a most relaxed, yet uber-effective way. Most of me just wanted to give in and lay on the ground. But the fighter in me refused to give up like that – after working so hard for 24 hours, I wasn’t going to be taken to the ground by a little dizziness! Standing up to leave, though, caused a wave of nausea. I sat back down, announced my intention to have a good spew and the nice fellows from St Johns came over. They figured I had low blood sugar, but all my tests were good: glucose, blood pressure, and heart rate. Free post-race tests, how cool is that! 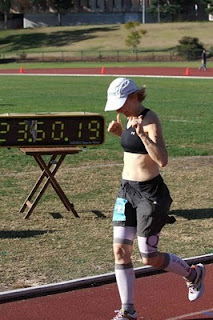 I managed to squeeze two bowls of plain instant porridge down over the afternoon – 320 calories. I could drink water, but food just made me feel sick. Because I was unable to eat, I was basically living on my fat stores. That meant I could survive another month, but I had to move at the pace of a koala.

Monday morning I woke up hungry. Only down 2 lbs, which basically represented 7,000 calories I didn’t eat on Saturday and Sunday. Pretty darn good. I like science.

Had to wear Rolf’s shoes on Monday. Mine wouldn’t fit. My legs from the knees down were nicely swollen for a few days, but lots of elevation and an ice bath helped immensely.

Posted by Bernadette Benson at 4:38 AM No comments: