I now have the secret weapon for 24 hour racing. Sofa sleeping! In the week leading up to the event, I slept on my living room sofa. Then, travelling to Melbourne, I slept on the hotel room's sofa for two nights. And I won with a huge PB. Definite correlation.

Then again, maybe my result should be correlated with my partner/crew's nasty head cold and cough. Maybe I'll have to inject him with a virus before every race now.

Or maybe it was because it was daylight savings time weekend (clocks rolled back during the race, so we went back in time. Yet they didn't let us have the extra hour to run, darn them!)

So many correlations I could come up with, but I think I know the real reason for my result. And I guess I should specify what that actually was. I ran 238.261km. Along the way, I surpassed the following records:

My history of 24 hour running certainly started with a bang but seemed to head into a quick fizzle. In 2010, I ran my first 24 hour and travelled nearly 201km. BANG! In 2011, I was honoured to run for Canada at Commonwealth Championships in Wales, but dropped around the 16 hour mark with 147km after 9 hours of unrelenting nausea. FIZZLE. Back in Perth, the nausea continued on and off until I got blood work that showed very low iron stores and haemoglobin. Oddly, my only symptom had been the nausea - never fatigue. Pumped up with mega doses of iron ever since, monitored carefully. In May 2013, I ran for Australia, as a newly minted Aussie, at World Championships in the Netherlands. 216.343km. A PB, but rather less than what I had written in the plan. I had suffered burn out in the months leading up to the race and my mental mojo wasn't there. I took 3 x 20 minute sook breaks off the track during that race. FIZZLE.

And now, we arrive at April 2014, for the Coburg 24 Hour Carnival and Australian National Championships. After spending the last year slowly digging my way out of vast over-commitment and lingering burn out, I started to mentally come good in the last month or so. I wrote my race plan 4 days before the event. 236km. The number seemed ridiculous. Far in excess of what I had planned for 2013 and far in excess of what I ever thought I should be capable of. But the maths kept saying I was capable of at least this much now. For the first time I found myself really questioning the maths. Seriously? 236km? 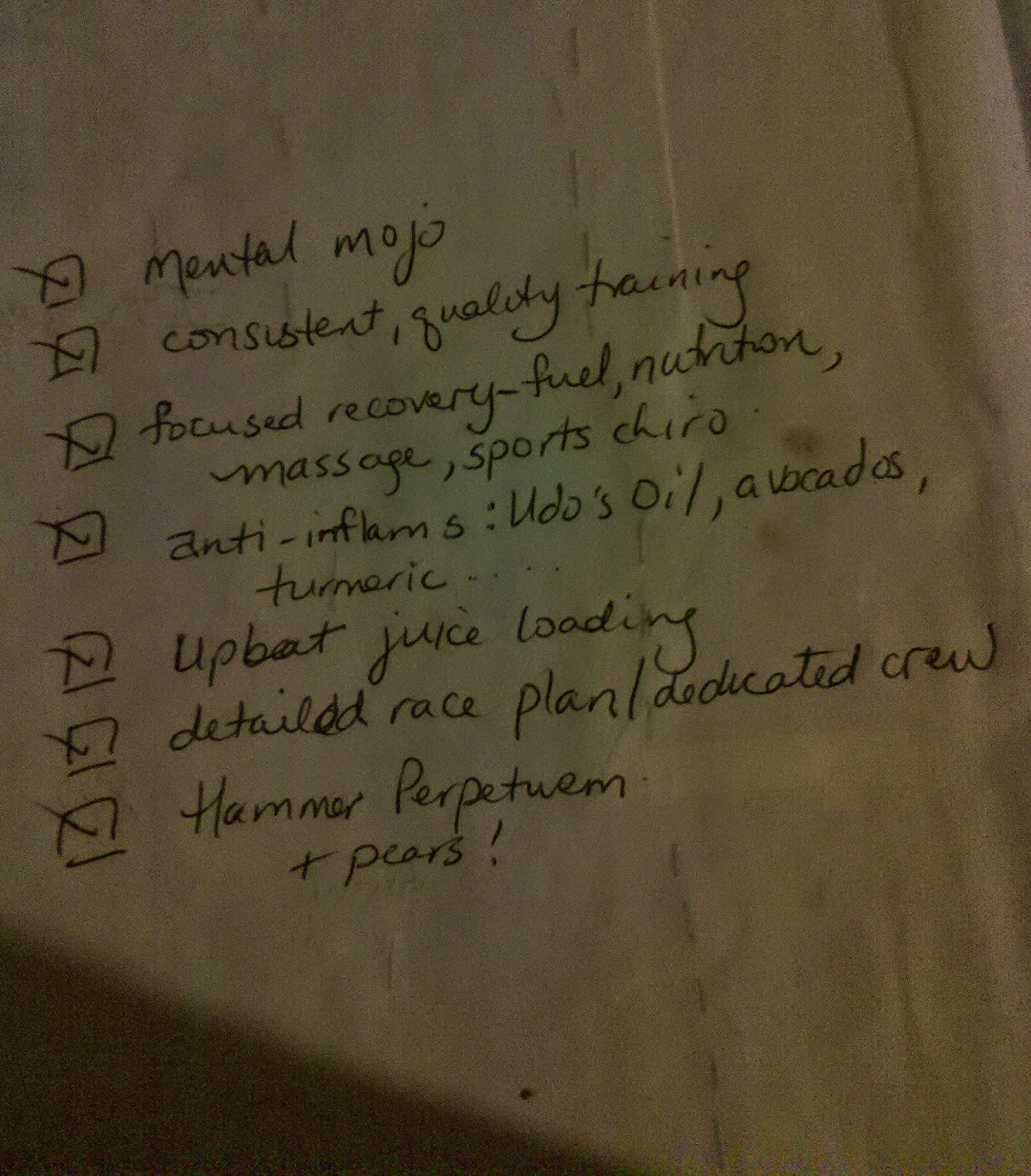 In addition to having a tick beside "mental mojo", I also had a tick by several other key items. Based on my review of the research on 24 hour runner splits, I decided to go slightly more conservatively for the first 6 hours. Not all runners do, but I saw enough evidence that said that I could still get to 236k with a more conservative start and I thought mentally that the last 12 hours wouldn't feel so "bad" if I didn't wipe myself out and then feel like I was exhausted and trying to hang on for 12 more hours. I saw that I would be tantalisingly close to some 100k record times, but let them go, feeling that chasing them would be a mistake. Even the Australian W45 12 hour and the 100 Mile Open records were a bit close. I made a firm resolve to keep my primary goal in mind and chanted "patience, patience" to myself for the first 6 hours.

My mantra somewhere around the 18 hour mark became "Like it or hate it, it makes no difference." This mantra that came to me acted to calm me and keep me from getting angry/upset/agitated by any pain in my body or annoyance on the track, with the weather, etc. I was greatly reminded of how the Bibbulmun FKT had taught me about acceptance. I drew on this memory as well through the later part of the race. As soon as I found myself wishing for an experience other than that which was present (e.g., "I wish the sun would come up" or "I wish I had more pears"), I would remember the value of acceptance and recite my mantra. By dwelling on any suffering (anything other than that which was present), I would only make it worse.

Contrary to my prediction that I would cover only 9k in the last hour, I was able to cover 10k. Plus I had covered 10k rather than 9k in the second last hour as well. Thus, I finished off with 2 "bonus k" over my plan.

Could I do better? Yes, I believe I can, slightly at least. But it will take the whole universe lining up again - my health and training, my crew, the weather, and a good race setting, as a start. And I will need nothing to go wrong - no injury to develop during the race, for example. Adding to that magic mix, I will need slightly more strength and an even more tightly tuned race plan. 2km in 24 hours sounds like nothing, yet if one looks carefully at a race like mine, where toilet stops were restricted to 30-40 seconds, there were no clothing stops, and only one "fixomul"/shoe lace adjustment, there's very little left of "wasted" time to capitalise on! 2km is another 12 minutes or so. Where do you squeeze out that much time? It will be a challenge I'll take on, but not again this year. I've got other adventures now. And they'll all start with a little sofa sleeping, I think ;)
Posted by Bernadette Benson at 7:48 AM 3 comments: