A Play on Toes 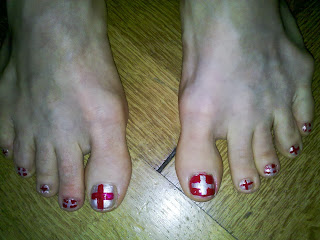 You can search by bib numbers and click any runners to "add to favourites" - should work for the live tracking on Saturday 7 am Swiss time (that's 1 pm Perth or late the night before in western Canada).
Posted by Bernadette Benson at 4:41 AM 1 comment:

Other migrating animals have it easy. They just wake up one day, point their beaks or snouts north or south, and away they go! Nothing like humans, who have to figure out what bits of their nest to bring along, arrange others to look after the nest they leave behind, and spend days looking for the best flights (can you imagine a whale analysing jet streams and currents and fish stocks to decide what day to embark on the journey?). Then, because our nests cost money to maintain, there's the matter of accumulating enough of that to last (or bringing some work along, so the migration is essentially pay-as-you-go). And arranging for temporary nests whilst abroad. Can't just show up and build our own!

So, that's where the last month for me got eaten up. High volume training, included. I backed up the 150k week with a 130k + 3800m week, then dropped mileage and added a few speed sessions, whilst keeping brutal strength training, brutal massage, and sports chiro going. The training was a constant joy, allowing me to hit "pause" on the seemingly non-stop arranging and organising and "DOING" of travel preparations. Except, of course, when my running mates would interrupt my interlude with those well-meaning questions, "Sooooo, how's the packing going?"

Training has continued to go well and it's now one week to Swissalpine, race #1 of the season. I'm a bit stuck as to how to approach this one tactically, considering I now have the Irontrail 201 to back up with 12 days later. I think I will take a "cautiously fast" approach...being careful not to destroy myself or unduly risk injury that would prevent me from fronting Irontrail in the best possible condition.

My extra ankle joint I inherited after my collision with the small log/large stick remains. It's the oddest thing, sitting essentially under the retinaculum. It pops out when I point my toes and disappears when I pull them back towards my knee. I get some wide-eyed looks when I demonstrate my new trick! And although it was causing me no grief, the fact that it was still there after nearly a month, with an overseas trip planned wherein I intend to run 201km over what could be 40 hours straight...I finally decided to check in with a foot specialist physio. He torqued my foot in all directions and could really see no reason why I shouldn't go ahead! He figures it's slower to heal because I keep running on it. Fair hypothesis :)

With the decreasing running volume, I've been able to fit in a few complementary sessions, including yoga and swimming. Even had a "three-sports-bra day" this week! That was a first!

One more sleep and I'll pack up my jars of cinnamon and turmeric, leave the brambles and nettles of England behind, and head for Switzerland! Tomorrow's short trail run should be in the Champagne region of France. I love Explores!
Posted by Bernadette Benson at 7:28 AM No comments: