The Generator in the Campground

As I've been making the long journey towards home in Perth, the low growling malaise intensifies.

What does it take to be happy?

No, I'm definitely not depressed, but I sure don't like this grumbly feeling of discontent that sits like a far away generator in a campground, running constantly, but disturbing my peace only intermittently.

I have had an incredibly rich and rewarding season abroad and have learned many cool things, such as:

Tarantulas get a bad rap because of their size and hairiness, but they are harmless, shy, and docile.

Grand Canyon's top, which appears rather like a desert plateau, is high. About 2,200 metres.

Squirrels in America carry bubonic plague. One very good reason not to feed them.

Converting Fahrenheit to Celsius is done by taking (temp - 32) and dividing by 1.8.

Matterhorn is on the Swiss-Italian border, so is naturally called something else by Italians. That something is Monte Cervino.

My Swedish great grandpa paid $10 to secure and work 160 acres of land in Saskatchewan in 1903, then became a citizen and got his "patent" (ownership) of the land in 1907. Sweden is the one ancestral place I haven't been to yet (having been to England, Ireland, Slovakia, Hungary, and Germany).

Anasazi means ancient ones or ancestors.

There are some seriously messed up American government policies, but many, many beautiful, kind people living in beautiful places there.

But amidst all my learnings this season in the campground of life, the generator has grumbled away in the background.

I knew happiness - true, contented happiness - wasn't going to be found in running well at UTMB this year. That's too shallow and it sure couldn't bring a high to last a lifetime...not a long lifetime, anyway :)

After being on the European continent for the season, I spent six days exploring the south of Iceland with two of my family, hiking around Europe's largest icecap in a 9 degree rainstorm and fog. Invigorating and challenging; I was in the moment. Can't hear a generator through two layers of rain jacket!

On to Canada, where my recovery month continued. I ran a 15 km trail event with my mum, who only started running a handful of years ago. The race route overlooked a lake with colourful autumn foliage and the friendly, low-key event was followed by the most spectacular Northern Lights of my life that night. Special indeed. But that generator....

Ready to run a few more miles again, I headed for Golden, British Columbia, to target some "bucket list" Rocky Mountain runs in my homeland. I explored the Iceline Trail and Emerald Triangle routes, running up to 2,200 metres alongside glaciers and fossils, with my partner who has built up again to long distance after doing in an ACL, MCL, and meniscus last year. "Wow!" views appeared around so many corners as I called out, "Haaaaaaay-ooooooohhh" to warn off bears. I felt adventurous, healthy, and strong. You can't hear the generator when you're yelling ;)

Yet so many of those nights, tucked into my "tent," I felt the malaise of that bloody generator rumbling away in my brain. 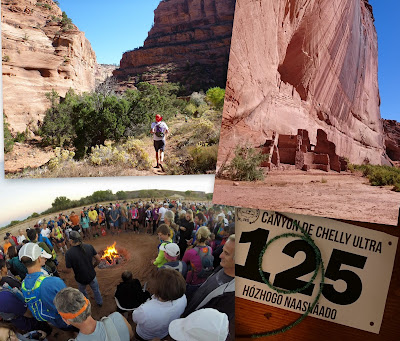 On to America in October. The Canyon de Chelly 55km Ultra on Navajo Reservation land. A celebration of Rolf's recovering knee injury - a long year with lots of low points. Elders lit a fire and said prayers to greet the rising sun in the east, blessed us with eagle feathers, then sent us running towards the sun, down a canyon full of ancient ruins and petroglyphs. A handmade turquoise necklace was placed around my neck at the finish. I was thankfully too tired to attend to any rumble of discontent in my head that night.

A warm autumn allowed us to point the little red rental car towards Colorado and make an attempt on a Class 2+ "14er" - one of Colorado's 14,000+ foot mountains. After much hand-over-hand scrambling and a few hours spent calming the panicking monkey minds within ("OMG. What are you doing?! This is scary. There's no shame in turning around at 4,100m"), we reached the top of Mount Sneffels at 14,150ft/4,315m. My highest self-propelled summit. I was too focused on the impending descent to celebrate my scrambling skills or feelings of bravery! That night, the mix of adrenaline, cortisol, and other chemicals kept me focussed on my queasy stomach more than my questions about the pursuit of happiness.

Were all these adventures just a distraction from the malaise? A way to be in the moment and prevent me from hearing the incessant rumbling generator, like a refrain repeating, "BUT WHAT ARE YOU DOING WITH YOUR LIFE??" And does it matter?

From mountain highs to the fiery red sandstone slot canyons and washes of Utah and Arizona. Geological forces thousands of millions of years old. Time scales we can't really fathom. We waded through water for hours, numbing the feet, whilst keeping an eye on the weather in case of flash flooding. Feeling adventurous again. Exploring. Happiness? Or just another distraction in a series of distractions?

Getting four seats between the two of us for the long haul flight from LA to Sydney. Happiness? Or just less suffering? ;)

My photo app freezes as I write this blog post and I reboot. I'm staring at the machine, wondering what I'll be writing next. Wondering what answer I can find for myself as I try to write out my malaise. The screen comes alive. Staring at me is my current desktop background. A "one-a-day" calendar page from one of those calendars full of cat photos, which I saw on my dad's beer fridge this season. A lazy cat laying there looking at the camera - with the caption: 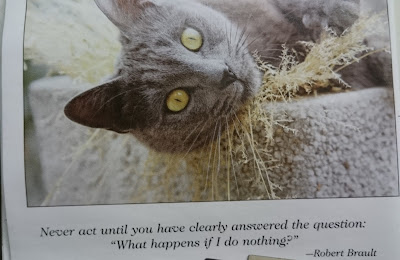 Never act until you have clearly answered the question, "What happens if I do nothing?"

What happens if I just accept the generator sound in the campground of life?

I wonder if the generator will work in the icy cold at the Yukon Arctic Ultra this February. Maybe it will be all quiet up there ;)

Well, perhaps I have it. The last learning from my season abroad: Accept the generator noise in the campground of life.
Posted by Bernadette Benson at 8:19 PM 4 comments: