A Mini Rogaine Before Another Mini Moe

This week had some "creative" mileage as I tried to fit training in with the visiting relatives from Canada. After some light aircraft adventures to the outback, I headed south to Harvey for a "social" rogaine with my family. To add to the creative attempts to get mileage in, I had them drop me on the Southwestern Highway and I ran the backroads in to Harvey, while the sun set. A really pretty run, with lots of curious locals along the way wondering what I was up to. One 10 year old boy raced me for a few hundred metres down the road. He said he won, although he seemed to be the only one who knew where the finish line was ;)

The rogaine was the first "social" one I've done - it's so hard to turn off the competitive gene! Our 4 person family team (Rolf, mum, auntie, and I) were out for 6 hours and got just 6 controls (that's not very many, as rogaines go). But we hiked 17 kms, with hills as well, so I was darn impressed with the ladies who have never done this kind of thing. We finished 141st out of 167. Mum is still trying to understand how so many people could walk/run so fast through all that bush! Despite the "low" finish, I'm sure we were 1st International team ;) We called ourselves "So and So and Szuch and Szuch" (rellies' surnames are Szuch). 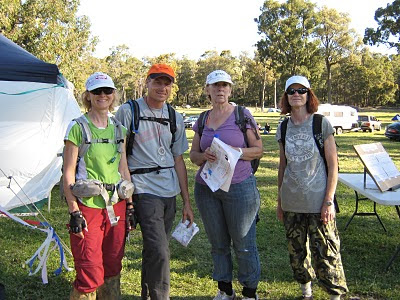 The rogaine acted as a pseudo-taper, as tomorrow is slated as the second go of the Mini-Moe.
Posted by Bernadette Benson at 4:16 AM