Fast and Slow, but Same Result

This week I competed in two races, with similar placings in each... only my paces were a bit different: 4.24 min/k vs 12 min/k!

I managed to find a 10k race to do midweek (Masters Athletics WA 30th annual Track and Field Championships), which was excellent, as I really prefer to get my speed training in during the week and leave weekends to long runs. The 10k is where I managed the 4.24 pace (43m 58s; 1st W40; 2nd f overall, although it was a small field and the time is really the thing that matters). I was quite happy with my time, especia 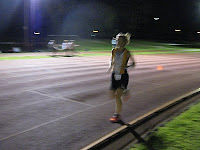 lly considering I'd done 25kms of speed training and hill training in the two days before the race - no taper whatsoever because I'm using these sessions for training.

The race led to some discussion and now I have a question (see Poll on the right). Doesn't everyone appreciate/need a little yelling during a really hard race?? I know when I'm digging deep, it can really help to hear someone yelling encouraging words such as, "Keep it up!" Rolf, however, finds such comments rather annoying if directed at him. So he has trouble yelling encouragement. When I plead, I end up with big smiles and a thumbs up. Now, on Thursday night, that made me want to punch him. (I know that's not very nice). There I was grimacing, sweat pouring, lungs and heart at max, and my supporter was grinning like I'd just sunk a nice shot in mini-golf?!? I admit that it did seem to work a treat to give me a burst of speed, though, as I channelled my anger into my legs ;)

So now I'm curious. Am I a freak in liking some serious voiced, sometimes loud, encouragement? If so, I should know this, as I'll (1) get better at yelling at myself and (2) stop yelling encouragement at other racers.

The 6 Hour "Been There Done That" rogaine two hours south of Perth. For those not familiar, a rogaine is a long-distance cross-country navigation event. Using only map and compass, you have 6-24 hrs (depending on the event) to find as many hidden "controls" as possible. It's like a treasure hunt for grown-ups!

Rolf and I went out to this, taking the motorcycles on a rare summer outing. The terrain was mostly open farmland, so the navigation was often easier. It started m 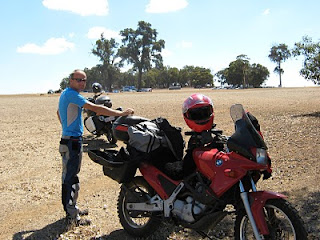 id-afternoon, so we had the 30+ degree heat followed by a few hours in the dark. There were ticks, bulls, sheep, marshy bits, and electric fences. All the regular rogaine things! Despite not having rogained in 12 months (and it being only Rolf's 2nd event), we finished 2nd mixed team and 12th/90 overall. I figure we clocked up about 30 kms - much of it was jogging at around a 7 min/k pace, but you lose a lot of time in thicker bush, in the dark, and climbing over fences!

In the last hour, Rolf dug out his Perpetuem solids (caffe latte flavour) to try. I was really excited, as I'd gotten him a container to try, but hadn't tried this flavour myself. I'm not a coffee drinker, but was hoping it might still be a nice taste. Well, it was a definite winner with both of us. He was good enough to share the remaining ones with me and we used those as rewards through the last few controls and back to the "hash house" (admin/camp area). They were especially nice after having eaten a bunch of sweeter chews through the day - no sweetness to these at all. They're brilliant.
Posted by Bernadette Benson at 2:03 AM