I'm always joking about how much I like running with my "pack" of trail mate "dogs" and "sheepdogging" to keep the pack together. Heading to The North Face 100km (TNF100) in Australia's Blue Mountains wasn't ever a goal race for me...but a few of my "pack" were doing it and I somehow got drawn in. I wanted to be with my pack.

For a brief time after the gun went off for Wave 1 starters at 6.54 AM, it was just like a great training run, sharing the single track with three of my mates. We worked well as a team, calling out to pass slower runners in front and picking our places to make our moves.

Of course, the race isn't a team event, and it didn't take long before we had to break up, forced to run our own races at our own paces, dealing with our own issues in our own time.

Going into the race, I found it hard to calculate a projected finish time and splits. I had never even seen the Blue Mountains. And I had never run a race with +4500 mtr elevation. So I used other race results to form estimates - I looked at my other races and extrapolated. I tried to compare to what the top females had done in the past, but they hadn't done the races I'd done. My best estimates put me between 12 to 12.5hr, with a very slim possibility of 11.5hr if all the stars aligned and I was fitter than I thought, coming back from the compartment syndrome.

I put myself down as a 20% DNF, due to my lingering foot arthropathy and perineal tendonopathy (one good opathy deserves another!)

20km into the race, my foot made some minor comments along the lines of "Hello, I'm here." Because it's laterally-based, I focused on my stride on the flats, being sure to land evenly. I think part of the reason I developed the problem in the first place was landing on the outside of my foot during the Bibbulmun FKT attempt. For the next 10 or 20km, it made small comments, but never outright yelled at me. Then it just got quiet. Hooray! (Post-race, only minor soreness).

Going into this race, I had flown under the radar. No one picked me in the list of "Top 10s." Admittedly, I was slightly insulted, but I was honestly MUCH happier being "just another runner" there to do my thing. No one expected anything of me (except all my mates, of course!) and no one stuck a GPS tracker in my pack at the start line.

The splits I decided to try to follow were the ambitious ones of the 2011 course record holder, Julie Quinn (not ambitious for her, of course, but for me, because it was an 11.39 result and she's a world title rogainer and IM finisher, as well!). 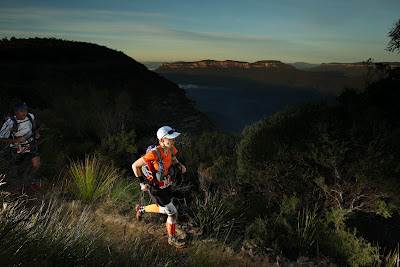 Desire: 2h 0m + 2 min transition
Reality: 2h 6m + 1 min transition
Explanation: I figure I lost 6 minutes here by not going hard enough on the early road sections, getting caught behind slow guys on the single track, and not being assertive enough about passing. I did this for about 30 minutes and then finally got much more assertive. I suddenly remembered very vividly the 20 minutes I lost at Swissalpine in 2010 and couldn't bear that happening again.

Leg 2 20km
Desire: 2h 7m + 3 min transition
Reality: 2h 0m + 1 min transition
Explanation: Without going too hard, I managed to comfortably claw back the lost 6 minutes during the flatter sections of this Leg. This was the section where I passed Julie Quinn. As a mate and I approached, he turned to me and said, "That's Julie Quinn!" I replied, "Oh crap! Passing Julie Quinn in TNF is like passing Mick Francis in a 24hr event." In other words, either Julie is having a bad day or I'm probably doing something very, very stupid. However, I was running on her splits and feeling comfortable, so just stuck with my plan. 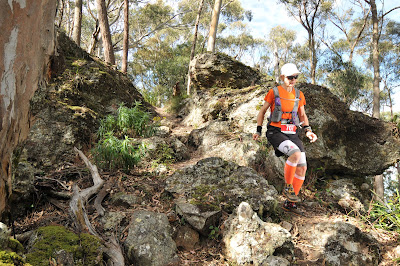 Leg 3 16km +505 -611
Desire: 1h 50m + 2 min transition
Reality: 1h 55m + 1.5 min transition
Explanation: Oddly, although Julie's split was 1h 50m and I had 1h 50m on my master sheet, the split in my pocket read 1h55m. And that's what I did! Really, I just ran the best I could. It's not that I could seriously pick a pace of "7.10min/k" and hold that exactly, when the terrain is constantly up and down and varying between fire trail and single track with boulders or creeks. And I'd never seen any of it before.

Leg 4 11km +619 - 247
Desire: 1h 20m + 2 min transition
Reality: 1h25m + 2 min transition
Explanation: Again, I just ran as well as I was able, being new to the course and just pushing as hard as I could, knowing roughly how much time and distance was still in front of me. This is the section with a place called "Nellie's Glen," which most people curse. It was one of the few sections I didn't hate ;) Coming into the end of this Leg, approaching CP 4, is where Julie Quinn passed me. However, we left the CP together, as I transitioned a bit quicker. 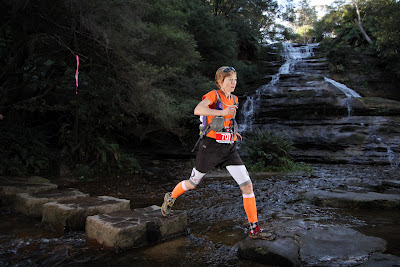 Reality: 2hr 56min + 4.5 min transition
Explanation: When I left my crew (thanks a zillion, Paul!) to start Leg 5, I thought about yelling back to him that I thought 3 hours was more likely for this section. Not that I could know, but judging from how brutal the course was and the calibre of athletes I was trying to keep up with, I thought there was going to be a toll coming.

Just after leaving this CP, I had a brief "low" moment - I'd had one brief one earlier, too, descending some stairs. I couldn't even say where that was on the course, since the whole bloody thing is stairs! ;) It was low fuel and I had a dizzy rush. It took about 10 minutes to come good. Julie was long gone. But I wasn't chasing her - I know better than that. I just run my own race.... and if my own race is better than hers, I'll see her again. The 9km +900 mtr hill climb was where I thought I might catch a female or two, if anywhere. Loooong endurance is where my age seems to help, I think. Because I really am over the peak age for "short" trail races now. And sure enough, I caught one female. And several males. I came into CP5, the last one, knowing I was now 3rd female, but Shona Stephenson was going to be hunting very aggressively for me. And it's always better to be the hunter than the hunted! Faffing about at CP5 with my jacket and headlamp, I spent over 4 minutes in the aid station - a total disaster! Shona came through and we left together, her just in front. Darkness had just hit.

I had another dizzy spell just after leaving the CP. I was able to keep Shona in sight 100 mtr ahead, whilst on the road and wide paths. I passed a fellow who wanted me to help him get his reflective vest over his pack...he had no idea Shona and I were duelling for 3rd. I tried to throw it over his shoulder as I ran past (sorry, mate!) I shovelled some fuel in, then some more. Somewhere in there, as the track transitioned from road to trail to single track, I looked down for a moment to put my fuel away, and went down on my hands and knees. Wham!

It took about 10 minutes for the glucose levels in my brain to come right so that I could properly navigate the technical terrain. And it seemed the fall had affected my trail mojo. I tripped again when I tried to speed up. Boy, it would have been nice to run this section before the race! There is a definite advantage for the top ladies having trained frequently on the course. 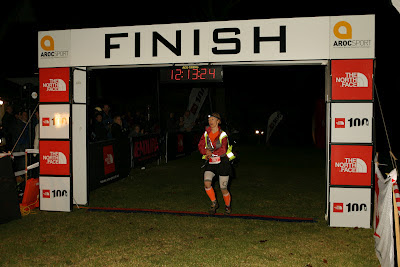 I took another caffeine pill, hoping for a bit more "surge" power, but I didn't really feel very confident in this section. I just felt a bit awkward and couldn't get a rhythm going. A sign of my faltering state, there were 4 guys who passed me in this section. They were probably all guys I passed on the Kadumba hill climb!

I saw that finish line and launched into a sprint, letting out a growl as I surged for the finish. The race directors were a bit taken aback by my aggressive finish! But it was a tough race (I know, what race do I do that isn't tough??) and it was my way of saying "Ha! Take that you b&@!#ard of a race!" My finish was 4th female, 30th overall (over 600 finishers). The 12:13 time would have been good enough for the win in 2010. But the girls just get better (as do the boys).

In terms of a gear shakedown (call it sponsor plugs, or just call it what it is...my honest gear review - not all are sponsors, anyway), everything worked. Fueled 12hrs on Hammer Solids and endurolytes. My jaw was sore the next day, but I never felt nauseous once (just needed more calories a few times).

Loved my RaceReady stuff as usual; love the pockets for this distance stuff. I really should grab a pair of the "sexier" cut ones instead of wearing the baggy ones all the time, though... I'm just a girl of function first :) 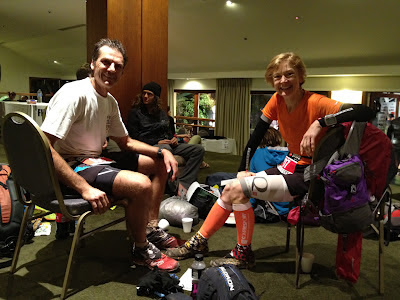 The new Compressport arm warmer/compression sleeves were fantastic. They infuse this nice smell into some of their stuff that either really helps or just provides a fantastic placebo!

The UltrAspire pack was really comfy (though the sternum straps do seem to loosen off every 15 minutes or so). The x-talons were great over 100km - what a joy to run in dirt and mud instead of WA's pea gravel! And here's something new I finally tried and recommend HUGELY if you ever chafe anywhere....the 2Toms SportShield. Okay, I'm an idiot, as we are the distributors for it and I've been a 2Toms Blistershield powder user forever. But I didn't know about the other lube stuff and always just had Body Glide. And after every run/race over about 5 hours, I had chafe - and sometimes bleeding. Particularly under my sports bra in the front. Well, I tried the SportShield and seriously, not even a red mark anywhere. I used it pre-race on the triceps, chest, groin, back (sometimes my pack rubs if my shirt rides up).

Looks like I might have another race next weekend. If I finish faster, maybe I won't be out there long enough to get a sore jaw ;)
Posted by Bernadette Benson at 2:55 AM