It took a pandemic to get me to do the Cape to Cape Track FKT.

I guess that says just how daunting I expected this would be! Primarily, I'm rubbish at running on sand. It's not that I dislike it, I'm just very inefficient.


Having spent most of four extremely hot and often humid months in Western Australia over summer, training for the Sri Chinmoy 24 Hour race to be held on 20 March, with Covid spreading throughout the country, I suddenly found myself with no endurance event.

On Tuesday afternoon my race was cancelled. Tuesday night I messaged a running mate to see if he still had a few days off work and could crew me. Wednesday was a flurry of preparation. Thursday at 1pm we were in a car headed south. Friday at 4.30am I was running. That escalated quickly. 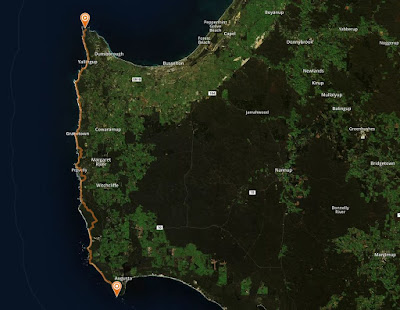 The Cape to Cape Track is a 130km + ~2500m point-to-point track in WA's southwest, running between Cape Leeuwin lighthouse in the south and Cape Naturaliste lighthouse in the north. The spectacular Indian Ocean is visible off your left or right shoulder much of the time (depending on your direction of travel, of course). It takes an average of 6 days to hike it with a backpack.

When I moved to Perth in 2008, I eagerly bought several trail maps. The Cape to Cape maps were amongst them. As I settled in, I started to gather local "intel." In 2010, one of my running mates at the time (Mr Minnesota, I hope you're well and happy) posed the idea of an ultra running event on the track. A few locals to the Southwest region expressed that they thought it impossible to do it in under 24 hours. And that an event in an area so rugged and remote, and on a poorly signed track, would be a race director's nightmare. The "race" idea was squashed.


In November 2011, I ran the 1000km Bibbulmun Track supported to set the female (and overall at that time) FKT. In 2012, I started musing about the Cape to Cape idea again and that's gone on for 8 long years. Much as I wanted to see the track in all its unique and intense beauty, every single time I thought about it, I recalled how slow I am on sand. How the white coral-like rock makes a normal stride impossible. And how hot the sun feels reflecting off white sand.

But suddenly, the pause button was hit on "The World As We Know It." Most paths in my future were suddenly road blocked. No 24 hr race. No trip "home" to Switzerland. No trip "home" to family in Canada. No 6 day race in May. No ability to work doing face-to-face assessments of children. No face-to-face German classes. Yet there was one path, a 130km one, I could take, if I was willing!

All day Wednesday I studied the paper maps, combined with the recorded men's FKT posts and their Strava and Garmin files. I figured out where a car could meet me and jotted down some very rough estimated times.

"Woohoo," I thought! I have Raidlight sand gaiters. I pulled them out and looked at my stock of shoes. I would need to glue velcro to the shoe to form a seal all around it. I had absolutely nothing appropriate for sand. Vehicles lower their tyre pressure on sand to lengthen their tread. They avoid knobbly tyres so they can have more surface contact. Runners should have similar on their feet. I had road shoes with mesh tops (i.e., sand-insertion holes) or my super-knobbly Inov-8 x-talon 212 trail shoes. They come free from sand-insertion holes, but are also free from plush cushioning. Running on rocks in those shoes = spikey-ball foot massage. I don't mind normally, but over 130km, it's a bit too much, to say the least! The shoes are like ballet slippers and bend in all directions. There was no way to afix the sand gaiters, as the tension pulled the shoe into a U shape, pulling my toes upward. Oh, well, when you've got one path forward, you wear whatever shoes you have, right?

Thursday morning I charged the Delorme inReach and my Led Lenser headlamp, put the course on two Garmin Forerunners, threw everything in some bags, and jumped in the car with an instant coffee. I wrote the basic crew plan out as Stephen drove.

Given Covid, we both kept up our hand sanitiser habits, despite knowing our proximity in the car over hours meant we could only hope neither of us had it and just try to avoid contamination with others.

Stephen is no novice to adventure, being from rural Queensland, having lived all over the country, and being ex-military, but he was a crew novice. I was already asking him to take a few days out for this, do all the driving, get up before 4am and chase a stinky runner all day until midnight, then drive home the next morning. In the midst of it, try to avoid catching/spreading Covid at any petrol station or cafe. So I tried to minimise "demands" on the day. It cost time, but I am sure it kept the stress down for both of us. And with the high cognitive demand that Covid has placed on all our brains, that was the sensible way to have this adventure.

The wind was gone the moment I had bushes around me and that was the case for the rest of the day. Whilst at most crew points Stephen battled to try to light his stove or keep his crew sheet from blowing away, and he found himself rugged up in a jumper all evening, I was sweltering from early afternoon on. Even on the exposed beach sections, the wind was behind my back, so gave no relief. I doused my hat in the two creeks and at the one water tank I found and used it to soak my CEP shorts and calf guards down.

I had done my maths in two ways to come up with a projected time. The best case scenario was 18 hours. So I threw 30 minutes in to the plan for my less-than-perfect arrangement and warm forecast. The A goal was 18.5 hours. B goal was sub 20 hours. C goal was to finish, uninjured, of course.

After halfway (by distance), at Prevelly's Margaret River mouth crossing, it was 1.30pm and I was on track for 18.5 hours. But as soon as I left the protection of the gazebo and the sun hit me again on that sandbar, I knew I had to slow down. For the next several hours, I played head games with myself. Just do a sectional end-to-end. No need to do it all in a day. Just let it go. It's my adventure, after all. Look at that couple sitting in their camp chairs with their beers and their 4WD setup on the beach, wouldn't that be nicer? I'm doing this all wrong!

But on I went, eyes to the ground, looking for the easiest place to put my next footfall. One footfall after another. Every step was one step forward.

A southern heath monitor lizard (small dinosaur) and I came face to face around a bend in the trail. Fortunately, we agreed he wouldn't run up my leg. Good on 'im. I saw many bright green rock parrots. And two baby dugites - one at dusk I got to move by thumping the ground with my foot a few times and one I noticed as I jumped over him in the dark. A rabbit, three golden orb-weaving spiders (spread over the trail as they do), and one tiny neon green one. During the day I passed amazing limestone cliffs, one of which bore a metal gate covering a cave entrance (entry by permit).

This track answered every one of my prayers for change. That adage "Be careful what you wish for" was proven true again and again for me as the evening wore on. Sick of gnarly boulders? The track dropped me onto a soft sand beach. Sick of soft sand? Great, here's a boulder scramble uphill in the dark with no markers. Yup. Sick of that? Wishing for a change? Awesome, time for that white pokey coral rock. Oh, wait, is that the last three kilometres and it's bitumenised?! I'll take it! Yee-yaw! Wait... it's ALL uphill?!

And then 200m from the finish, a trail sign "The Cape to Cape Track." A boot marker on it pointed left. My gpx file told me to go straight on. It was 11.57pm. My time had blown out to nearly 19.5 hours and I was determined to finish before midnight. I cried out, "I don't know where to go!" I took a left. As I ran, I thought, "No, it was a boot marker, not a Cape marker. It must be for another trail. They put the marker on the sign simply because the sign was there." I ran back, rounded the bend, saw Stephen's headlights and heard his laconic voice, "This is it, b." And then I ran through his toilet paper finish line. How perfect. 19hr 27min 22sec. 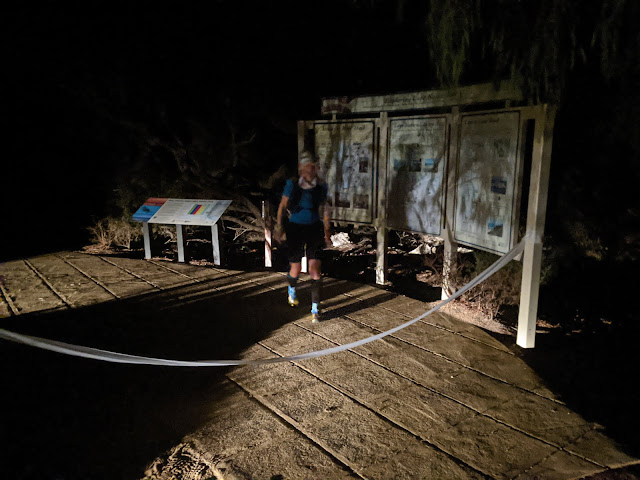 So, ladies, how could you make it faster? Choose a cool day. Alternate running packs, having a "full" one ready to pick up at crew points. Wear the right shoes for the job. Know the route or have pacers who do and can direct you.

Supplements: Fully Charged every 4 hours or so, Anti-Fatigue Caps, No Doz caffeine pills

Recovery: Lots of whole foods with colour, including some berries. Water. Loads of sleep. Omega 3-6-9. CEP Full Tights (so far, for 3 nights straight, as they reduce the ache in my legs so I can sleep.)

Logistical challenges on the track as of March 2020: Massive volunteer effort was put into re-signing the track over the past year and more markers were put in place. However, the glue has failed and perhaps as many as 1/10th of the reflective markers have fallen off. That's definitely no good in the dark. Even by day the short pale wooden posts blend in and are hard to see at times. Many junctions remain unmarked. There are often no markers within the villages (Prevelly, Gracetown, Yallingup). Scramble sections were often not marked, nor were beach exits. Without a gpx course to follow, one simply could not know where to go at times. I spent 10 minutes "lost" in a few places - one of which was simply when a truck at Gracetown parked right in front of the trail marker and trail, but left a very visible alternate track (which was simply the surfers' route to the beach). It would be totally unnerving without a gpx file to hike or run a beach that could be kilometres long, not knowing which track up was the right one.

Posted by Bernadette Benson at 6:57 AM