Running with mates not long ago, a topic that sparks no end of debate came up: how do you pace yourself for a race, especially an ultra? 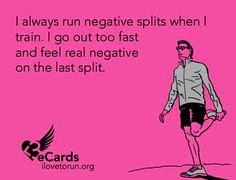 (1) Run as evenly as possible.

(2) Run hard from the start and try to hang on.

(3) Run easy to start and "negative split" by running further/faster in the second half compared to the first.

Given my recent 6 hour race and thoughts of 12 and 24 hour races dancing in my head, I thought it would be good to actually review what the research says on this, rather than just keep talking "folklore." I've been part of several conversations that sound like this: "Well, you know X runner just did Y (time/distance) at Z race last month. His splits were A/B, so ...."

I thought the research could given me a greater sense of what best practices might be.

First stop, Andy Milroy's 2013 book, "Training for Ultra Running." There are some wonderful graphs in the back appendix showing what top men, including Kouros and Newton, have done in several of their 24 hour events. Comparisons were succinct, in that they show splits only for "1st half" and "2nd half" and the ratio of performance derived from each. The average ratio for 17 performances was 87.4% for the 2nd half (distance run in 12 hours) compared to the 1st half. Only one of the 17 performances included a negative split (103% in the 2nd half).


Second stop, I went to DUV statistics and pulled up the 12 hour splits and 24 hour distances for 7 of the world's best recent females, including Suzanna Bon and Sabrina Little. None of them had a negative split. Their average ratio was 87.9%. The same as men, essentially (though I took a smaller sample). Interestingly, for those who know of world record holder Mami Kudo, her 2010 and 2011 Soochow performances had ratios of 81% and 74%, so when they are added to the women's results, the female ratio drops to 85.6%.

So far, it seems that elite 24 hour runners do not negative split and they slow by 12-14% in the 2nd half compared to the 1st half.

Out of curiosity, what about my own few 24 hour races? Sri Chinmoy 2010 (first ever) = 76% ratio. World 24 hour 2013 (bad mental mojo) = 77%. At first glance, you either guess I'm going out too hard or there's something else causing me to blow up in the second half. In 2010, I ran exactly what I predicted. For my first serious endurance event, I think 76% was acceptable. In 2013, I expected much more from the 2nd half, but had 3 "sulk" breaks due to the bad mental place I had been in over many months of "over-lifing." I had expected something more like 84%. We have yet to see if I really can perform better, as I think.

Back to the research. Next up, a review of some research studies. In sprints, my quick glance says runners start hard and slow down (e.g., over 800 metres). In longer races, say 5k and 10k, both "moderately trained runners" and world record holders do best by running hard to start, fading a bit, and running hard to finish. Their performance looks like a U shape (with the second 'up' swing in speed not necessarily reaching the height of the first on a graph!). Maybe saying it looks like a backwards tickmark (checkmark) is more apt.

What about events that are even longer? And how hard of a pace is "hard" for starting?

A study published in 2004 analysing the performance of 67 male finishers at the IAU 100k world championship road race in the Netherlands found that the best performing men not only started faster but maintained their starting speed for at least half the race, and finished within 15% of their start speed. Hmmm, 15% drop - that's about what we saw in the 24hr runners. The worst performers at the 100k championships couldn't maintain their pace for very long and dropped pace markedly over the distance. So, although they started out "easier" than the "A" group in terms of pace, perhaps it was still too hard of a pace for their own ability. And/or they lacked the endurance to hold it?

Another study (2013), rather elegant, had cyclists do a self-paced 20k time trial. Get it done as fast as possible. Then they made them do it again later, twice, each time with a different rule. Rule one was that their bikes were set to an average power equated with their original self-paced ride...they just had to ride to 20k again...and keep going if they still could. If they could go further when on the "even pace" rule, then even pacing must be more efficient than doing their self-paced thing. The "Rule two" trial was that they were supposed to stay at their average power but the bike wasn't set to it - thus, more brain power was required to try to stay on that pace. But at the same time, minor variations could then be possible. The result? Nine of the 15 guys QUIT before 20k! The quitters only got 10-15k done. They also reported more negative feelings during the "even pace" rule trials (for both rules) and their rating of perceived exertion was higher. The DNF guys were all guys who had started faster in their original self-paced ride. They rode the 1st third of the distance at 1-2% above their mean power output for the 20k. The 6 guys who managed to finish the 20k during the "even pace" rule had started conservatively in their original self-paced time trial (riding the 1st third of the distance at 1-4% below their mean power). AND, notably, those 6 guys were able to cycle 20-27k during the "even pace" rule. This again provides evidence that trying to run conservatively or "even" at the start means one will be left with too much petrol in the tank at the end...under-performance.

The research suggests that had I run up to 5% faster in the 1st third, that is a 4.34 pace, I likely would have blown up. My "central governor", the brain process coined by Tim Noakes, would have choked me along the way. It's the theorised governor that keeps a watch on body systems with a view to keeping us from killing ourselves. It's monitoring our body heat, sweat rate, muscle work rate, carb stores, levels of oxygen in the blood, and so on. It sends us "tired" signals to slow us down, recruit less muscle and cause less strain to the heart. Although we are "self-paced," our pace is still decided by this purported governor, which analyses what's "safe." And that's why, if we are suddenly told the finish line is further than we thought, we feel more tired! The governor makes a new calculation, given the change in one variable, and says, "Well, given the rest of the conditions remaining the same, we must slow down to survive." But, if we then get some more glucose, the weather cools and we are sweating less, or someone tells us there was an error and we are actually CLOSER to the finish line, we SURGE! The governor adjusts the "fatigue" signals, knowing it's now safe to up the pace. And that gives us the parabolic/reverse tickmark profile for so many of our ultra distance events.

In sum, my take-away messages from the research, my experience, and the "folklore" chats with mates are:

1. Run well within yourself.

2. Given point #1, the starting pace should feel comfortable and easy, but will still be faster than your overall average pace for the race. How much faster? In races up to 6 hours, appropriate pace may equate to about 2% faster than the anticipated mean pace for the entire race. In races of 24 hours, based on a quick analysis of those top women's 24hr performance at World 2013 Championships, the first 6 hours was done at an average of more than 30 seconds faster per minute/km. In other words, they were about 10% faster (range 6-13%) in the first six hours compared to their average for the entire race. Extrapolating to the 12 hour event, one might start at a pace that was 5% faster than the anticipated average race pace.

3. At the half-way point, it shouldn't feel "hard" yet (this little rule of mine seems to fit for races from 5k to 24hr so far).

4. Run your own race. This has been hammered home again and again to me. I found out at the Coburg 6 Hour last month, I was tied for 5th place overall at the halfway point. By finish time, I had passed three of those men, to move to 3rd overall. I ran my own race and didn't get caught up in who was on what pace/distance/position. I've also been on a track enough times to see many of the walkers in the concurrent race-walking events out-perform runners!

5. Endurance improves over time/experience. My ability to sit on a pace for a certain length of time has continued to improve as I've gotten fitter and the body has adapted.

6. Keep the perceived exertion down. Take caffeine, take beetroot juice, tell yourself lies about how easy it feels, and have everyone else tell you how great and effortless you look :)
Posted by Bernadette Benson at 12:53 AM