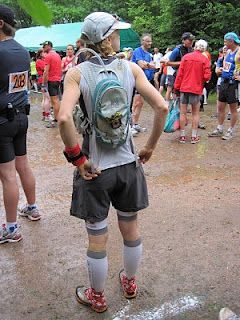 Well, I am here in Germany, having attempted to run the Barenfelslauf race last weekend. This is my race report for my "almost" race.

Barenfelslauf is a 3 lap course (21.6 k per) with 700 mtrs elevation gain (plus 700 loss, of course) per lap. It was a really pretty, well marked forested course that sure reminded me of running in the Canadian Rocky Mountains. We started about 30 minutes late because so many people turned up to register on the day. There were over 200 competitors, with probably 60% in the half and the rest in the marathon and ultra.

I was all geared up in my Compressport, had the Perp ready, and to show I was non-partisan, I was flying both the Canadian flag and an Australian decal on my hydration pack!

Unfortunately, I was pulled from the course just before I completed my second lap (43k mark at 4 hr 26 min). A half-marathoner had a heart attack at the finish line and could not be resuscitated. The police arrived and said the race had to stop so they could do their investigation. Rolf said there was a lot of angst around the finish line as they tried to determine whether they could or should continue the race.

As far as my race was going, I was on track to do 7 hrs (or slightly less). That was my goal time and it's been the women's winning time for most every year. I was leading for women when the race was halted.

An unhappy ending to the day for all.
Posted by Bernadette Benson at 1:39 PM