I woke up early the other morning - couldn't get back to sleep - so I decided to devote an hour to looking a bit more in depth at this North Face 100 race I've been entered in since December or so. No point in getting nitty gritty on details when the odds weren't looking good for me getting to the start line. Now, I'm up around 80% (booked a flight, even!), so I thought I'd have a cuppa, read a few old blog posts from previous racers, and watch the 2010 video.

So, I really need 100% proprioception in this foot. And I need to hone my up and down skills. 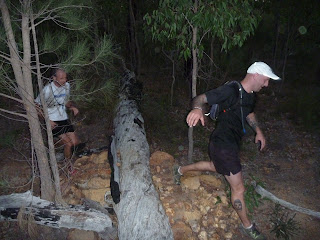 For our Wednesday night hill run last night, the main group did about 16k and I added a few bonus km by sheepdogging. I made a point of smashing the ups and downs hard and then just floating easily on the flats (I had a 20k tempo run planned for today). I kept having visions of myself doing a face-plant on the technical descents and standing up minus a few teeth. I wasn't sure if that was a good visualisation (helping to keep me alert) or a bad one (like the adage in mountain biking "Don't look where you don't want to go...like the cliff edge" I didn't want to create a self-fulfilling prophesy).

Fortunately, I run with such a great, fun group of trail runners. There's always a few good laughs to be had. And we've got some really fast guys, too. They take turns trying to kill me on the hills and goad me into running harder, with good-natured trail abuse. They're definitely doing their best to make sure I'm fit. 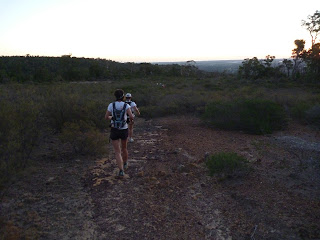 Today's tempo run was rather effortful, but to be expected after the last two days. Plus I think it was 31 degrees today. I thought it was autumn? Tomorrow I'll run an easy 10k, then hit the hills again for the weekend. I'm bringing weekend distances back a bit now, as I make it a point to develop my cheetah speed (yes, I know I'm hardly a cheetah, but visualisation and positive thinking are proven in sports, so I'll keep thinking cheetah thoughts).

Back to the push-ups, too. Lost some strength there, so I've gone from being able to do 28 in a row (last September's PB) to 20. Then I do another 10 x 2, with a fair amount of whinging on the floor between sets.

This weekend... I will finish the Bibbulmun 30 minute "doco" if I have to stop sleeping to do it! It's so close!

And maybe I'll look at that mandatory gear list for the race.

There better not be ticks in the Blue Mountains.
Posted by Bernadette Benson at 6:31 AM