On Sunday, Rolf and I headed out to a nearby national park for a 3hr trail run with a few mates. It had been raining through the night - really the first rain WA has seen for months.

As the jeep descended into the park, under cloudy skies, with the smell of wet dirt coming through the vents and views of glistening foliage...I started to have a small panic attack. It was fascinating. Suddenly, I felt nauseous. A part of me felt like crying. The "panic" was wordless. It was just a feeling. But if I was asked to put words to it, it would have sounded something like, "No, don't make me go back out there. I can't do it." 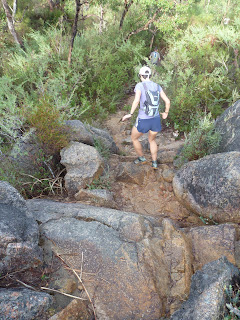 It was the Bibbulmun 1000k back for a mental visit.

Wow. Here I was looking at the most gorgeous scenery, in anticipation of perhaps running on one of the first "cooler" days for months, and I had a feeling like a cat being thrown into a bathtub. I just wanted to dig my claws in and scramble back out of that valley as fast as my legs could take me!

Post-traumatic situations supposedly involve "intense fear, helplessness, or horror." What I experienced was certainly no clinically significant response. But those words fit the bill pretty well.

I mentioned my reactions to Rolf in a nervously joking fashion. On beginning the run, I mentioned it to the mates in passing, too. It really had affected me.

However, within a few km, the familiar pattern of running settled in and my brain was reassured that I really was out for a fun morning of running and that I would be allowed to stop whenever I wanted. In fact, I could even enjoy some "bonus k's" by doing some exploring on tracks we'd never seen. The rain came down on us at one point and it was a welcome relief from the humidity and the sun poking through the clouds. I had fun. 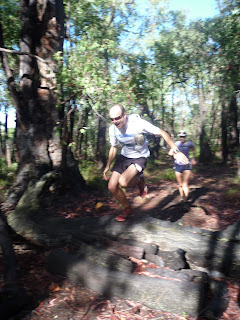 Well, except for that distinct non-fun moment two hours in. I decided to take my annual stack. I prefer to do this on a flat stretch of ground, so as to more fully embarrass myself. And leading is better, so that everyone can see. This year's stack was exactly one year from the last (April 2011 on the Bib track). I took out my left elbow and right knee again. It's important to establish traditions, after all.

This time, however, I was in the midst of twisting up a fuel container and putting it away in my front pocket of my pack, when I simultaneously decided to look back over my left shoulder at another enticing trail....Wham! I think I simultaneously dislocated (subluxed?) and relocated my left shoulder. The next 10 seconds were spent screaming, "Aah! Aah!" at the top of my lungs, face down on the ground. I was afraid to move, to find out whether my shoulder was out. Finally, I rolled over. Over my screams, Rolf said, "Is it just your knee?"

Knee, I thought? Did I hurt my knee? I knew it was tough for them looking at me and knowing nothing, but all my brain could say was "Aah!" and "Arg!" Once the English language came back to my brain, there was a nasty swear word or two. And something about "pause my Garmin." All that time laying on my stomach, camera in the pack on my back, and no one thought to take a photo ;)

I carried on gingerly for the next 1.5hr, figuring it was probably better to keep moving the arm and neck to promote blood flow for healing and prevent it all from spasming tight. I think it helped, though I certainly learned that it's hard to go uphill fast when you can't swing your arm properly! 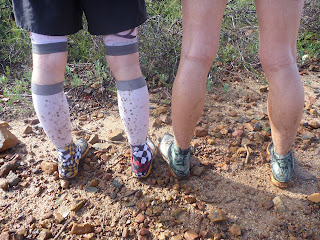 I'm lucky to have a chiropractor who has worked with a state level football club for the last several years. He's seen a lot of shoulder and neck injuries. Not my usual complaints when I go in to him. Did you know that you use the deltoid muscle to shift a manual transmission car? Today, you might pat your deltoid on the back for all the fine work it does. No more push-ups for me for a while. Anyway, it's nice to have a different running injury ;)
Posted by Bernadette Benson at 10:02 PM