Who said running was easy? And cheap? 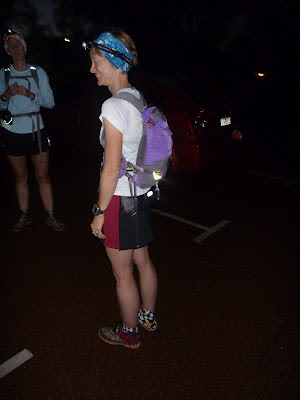 I have now digested the 25 page TNF100 competitors' manual. I was sooooo excited the morning after my last blog post - Santa was listening! He put the UltrAspire Omega on the doorstep! I had to order from overseas, as it's not available in Oz yet. But there was just nothing else I wanted to try. It sounded juuuust right for this little girl. I have a Nathan Intensity 2ltr, which I can use for several hours of running, but won't hold all the mandatory gear for this race. I also have the Ultimate Direction Speediva, which is an awesome 34ltr hydration pack (major overkill). But its baby sister, the Bandita, is still too big at 20ltr (that's what I used on the Bibbulmun FKT for long unsupported sections).

The Omega has a 2ltr bladder and 8.2ltr of storage. They say it weighs only 337g, but of course that's without the bladder weight (seriously, that's like weighing shoes without the insoles or laces). With the empty bladder, it's about 490g. Still, seriously light, as you'd expect from any modern pack.

I have no time left for long runs in it, with the race only 10 days away. But that's okay, I figured I'd know if I like it or not pretty quickly (if I didn't, that was gonna be a major problem, though!)

Last night I loaded all my mandatory gear into it and headed for the usual Wednesday night hill run.

The mandatory gear being: 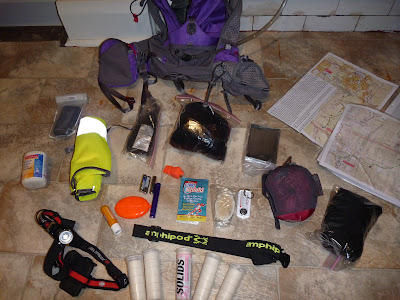 What was missing was the firestarter and matches that they will give me at package pick-up, which will surely be lighter than the camera I carried instead :) 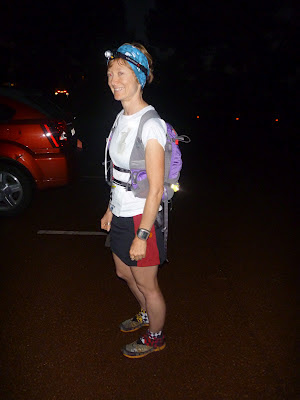 I also decided to try a race number belt - the amphipod one. So I ran around Bold Park for 15km with a Six Inch Trail Marathon bib on. I won ;)

The pack was a bit unusual feeling at first, as the sternum straps (two of them for increased load distribution, supposedly) are quite low. But the pack didn't shift at all and felt great (as great as 3.5kg feels on your back as you run up a hill!). The race number thing felt a bit hot, but I figure I should be able to wear it lower on the hips instead of the waist and shift it around every so often.

The only complaint - the valve on the Hydrapak bladder (same bladder as Nathan uses) is a dodgy one and leaks unless it's in the locked position. So I'll have to swap from my Nathan for now and get a new one. One of those annoying things about buying from overseas.

Now just to calculate my race splits on a course I've never seen, over a distance and terrain I've never run. Did I mention complicated somewhere before???
Posted by Bernadette Benson at 5:05 AM