Things We Don't Talk About

Remember a couple months ago I kept mentioning the undiagnosed medical "issue?" Then I just got quiet on the topic. Why? Because it was a (Language Alert: sensitive eyes should close the browser window now) 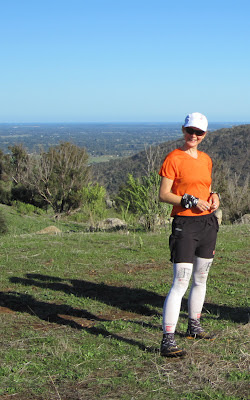 There. I said it. Well, I wrote it. And I have actually said it a few times, too. I'm not sure there could be a more unappealing sounding word in the English language.

I didn't write anything about it earlier because for a while there is was quite personal and rather scary. And being a topic not much discussed (at least amongst the females I spent my life around), there was a lot of mystery and "I'm the only one" feelings.

Last Thursday I had surgery. The main annoying thing about that was that I gained 2kg. My guess was water retention due to my body trying to purify the chemicals from the general anaesthetic. (Anyone who knows for sure could please let me know.) It took 5 days for my weight to drop. And I lost one day of running - a tempo session. Otherwise, it was just a feeling like I'd had a couple drinks and was in a fuzzy world (not a good fuzzy world. Rolf says it's more like being hit over the head with a very large hammer.)

I've decided to post something now because the last year of my own body's issues has taught me something I feel should be said aloud.

Sometimes, you see an athlete out there racing and they have a crap day. There are lots of reasons to attribute to a poor performance. But when it comes to females, we have a whole other one. It's this huge portion of the body (and the body's chemicals) devoted to procreation. Great when you need it, but the other weeks, months, and years when you aren't procreating, it's a complete pain in the....

Tim Noakes, who has been so good as to give us The Lore of Running resource, suggests the jury is still out as to whether and how much females may be disadvantaged in racing at particular phases of their cycle. But there is no doubt that (premenstrual) pain and bleeding are anathema to racing well (regardless of your sex, I figure pain and blood loss are not on the list of "must haves" for your race).

So, next time you see a woman who has an unexpected "off" day racing, consider what might not be said.

And, yes, I did ask the surgeon to remove a few extra organs to make me lighter and faster, but he refused. Maybe I shoulda gone private ;)
Posted by Bernadette Benson at 8:19 AM