Of Races and Dobermans

For anyone who's looked at my "maybe" list for 2011, you may have thought (as one person asked), "Is there anything that's NOT on your list??"

And of all the things on the list and the other maybes that kept cropping up, all of the sudden on Tuesday I found myself registering for the Maroondah Dam 50k (+/- 2000 mtrs) in Victoria. To be run in 2 weeks' time.

This one hadn't even hit my radar screen until Tuesday. My plans for February were an overnight 12 hr rogaine and the Moneghetti training camp.

It was a combination of being an IAU labelled trail race, a Qantas points sale to Melbourne, thinking I need to rest my tendons, and 2000 mtrs that sold me. Rather than limping my tendon issue out to try to race long in March (i.e., the 30+ hr Alpine Challenge), I thought it better to race shorter now and then go into a few weeks of rest/rehab. 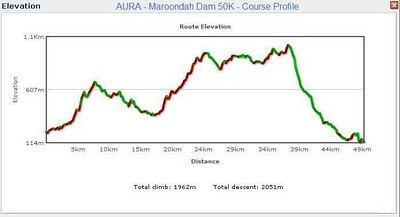 I ran all this by my physio on Wednesday and she liked the plan. So I suddenly made a shift to speedwork again yesterday, which I haven't done since mid-December. I've got pretty good hill legs right now, as that's been my focus, but wasn't planning on speedwork again until early March. It was a haaaard session!

I'd like to think it was so hard because just before that I'd gone to see Joanne The Researcher's premises and had a VO2max test done. By the way, she's still in need of a few endurance guys and she's incredibly easygoing and flexible in regards to appointments. She's a runner herself with some hill legs, too - most recently taking 3rd W at the Bold Park 10k race. Email j.trezise@ecu.edu.au or ring 0435 102 182. And for the sprinters - she's starting a sprint study, too.

Anyway, there I was on a treadmill (the most time I've ever spent on a treadmill now: 15 minutes) with a big mouthpiece in, running flat out, with two people I don't know cheering me on loudly (and watching I didn't shoot off the back of the machine, which I noted had a foam mat behind it). I learned that with a mouthpiece like that, you can't swallow. I couldn't get the imagine out of my head that I looked like some mad Doberman on that treadmill, drooling profusely, shaking my head from side to side, grunting.... The things she must see!

Results next week. I don't expect anything surprising from it, although I did learn already that my max HR appears to be only 170. A bit of a bummer, as that means I have less working range - so now my resting HR that I never really bothered too much with means more to me. Because with it usually under 40, it still gives me a 130 beat range. I'm thinking of the implications, but it does seem to corroborate my experiences that I cannot try to break records on hot days. And a hot day to me is just 26 degrees. This makes more sense now, since I'd be getting say 10 bpm more in heat and I'd hit anaerobic more quickly.

I'll have to do some more research on this one.

Big hills tomorrow!
Posted by Bernadette Benson at 4:44 AM