Bonding with Serp and Les

Wungong used to be my most favourite trail run - the best hills, good views through the gorge, wild boars, and butterflies.

Now I've got these other two under my skin. Saturday saw Dan and I head out to do the "real" Serpentine to Jarrahdale return trip (without the bonus k's of a few weeks back). Just under 4 hrs for 32kms and 1164 mtrs on a gorgeous cool morning for a change. It was brilliant! We stopped and had a few wild figs on the way back. In the afternoon I went to yoga to stretch and get some core stability in - it's my second time trying it and it seems useful - she knows her muscles!

Sunday (today) I headed out for a shorter one at my other new obsession - Lesmurdie Falls. Three of us started this one. I planned on 15k, but just couldn't help myself when Aaron headed out from the cars for another hour or so.... I followed him for a km or so as we explored a new section of single track. Naturally, when it started going straight up, I just had to see the top! I finally forced myself to leave him and turn around, repeating the mantra, "I am racing in 2 weeks." So 17k there for me and about 580 mtrs. 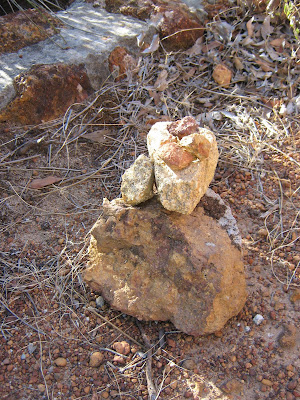 A few of the hills got nicknames today. The first one to be named was "Childbirth Hill." That's Aaron's. He created a new rule, which is to gather one rock from the bottom of the hill and carry it to the top, so we can start a cairn. This is what a baby cairn looks like (we had 3 rocks from last Wed's run, too).

The next big hill to be named was "The Little Lady." That's mine. I really like this hill. She's steep and comes on later in the route. You get to what you think is the top, where it levels out, go around a corner, and there's her daughter, a little hill. And then you go around another bend as it levels and, as Aaron said, "Surprise! It's twins!" After that little hill it levels again and then there's another nasty short steep rocky one. That one got named, too, but maybe I'll just keep that between me and anyone who comes out to meet the family :) And then you're at the top. 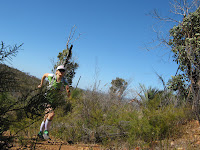 Despite my recent love affair with these two runs, it's back to my first love, Wungong Gorge, next weekend for the inaugural "Almost Valentine's Day Monarch Butterfly Fat Ass Rogaine Style Potluck Breakfast Run, Walk, Shuffle." It's got a bit of the Barkley Marathons thing with the books, but rogaine style, so you can get as many as you like.
Posted by Bernadette Benson at 4:53 AM