On the 1st of February, still in the throes of compartment syndrome, I registered for the Sri Chinmoy 24hr being held 23-24 June in Sydney. My goal: get that 225km open Canadian record I attempted at Commonwealths when things went pear-shaped. Registering was a mentally positive step in my recovery. I was going to be an ultra runner again.

I had also purchased a TNF100 bib off a running mate who needed to have surgery and couldn't go. A month out from the race, I tried adding a bit of speed work and it aggravated the injury. No speed work. Two weeks out I started forcing speed into my technical running, to at least try to hone those skills. And then I stood on the start line, thinking I was a 20% DNF risk.

As we know, it worked out pretty well. Maybe I could've been a few minutes faster if I'd seen the course before or if I could've done the speed work. But it was a decent finish and my foot was only mildly irritated for a day.

Two weeks before TNF100, though, a very good running mate and race director of the Kep Ultra emailed a bunch of people to say he had 5 more entries open for his 3 June 75k and 100k races in WA.

Crap. Temptation. Though it was a flat trail (i.e., not technical), it was an interesting challenge ...treat it like a road race, but with +1,000 mtrs over 100km. I registered knowing I could still withdraw the day after TNF100. And then I had that "Hand in the Cookie Jar" conversation with my partner about what I'd done. I thought I'd keep my entry to myself, but the RD facebooked it. Oops.

TNF done and the questions started no more than 2 hrs later, "So, are you doing Kep?"

I said, "Let's just see how recovery goes." Three days later, I felt good and my heart rate was normal. But Wednesday night, a sudden sore throat and a head cold set in. Heart rate back up. A wait-and-see again. 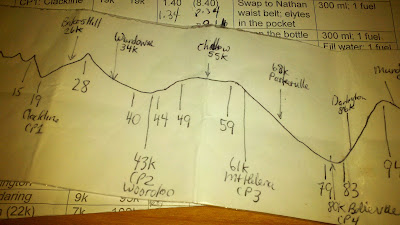 Then I needed to check the competition. I knew two of the four other female names in the 100k. A quick google search of the mystery names....

Time to write some affirmations. If there was one big thing I took away from TNF100 that I could have controlled more, it was my attitude. I let apathy take over towards the end. "It's okay if I finish top 5. Top 5 is really good."

Well, it doesn't matter where you are in the pack, if you let things like that creep into your thoughts, you are defeated. You will NOT achieve to your potential on the day.

So this time, I sat down and wrote all the reasons why I was so great and was destined to win. Sounds vain? Sure. But effective. The brain doesn't know the difference between reality and dream. And I wrote down other reasons why I should win (e.g., Rolf deserves it after crewing endlessly for me so much).

I kept my little paper close by over the next day leading to the race.

I wore the UltrAspire pack for the long sections where I needed to carry more water. I like its fit and even though it's an 8ltr pack, it weighs identical to the Nathan HPL020 (the regular one with just a few cubbies). The sternum straps seemed to stay in position better this time.

My only disappointment was my Inov-8 x-talons. I wondered if 100k of gravel would be too much for my feet in those "minimal" shoes. It wasn't. They were great. But they shrunk after they got wet at TNF100 and by 60k my toes were in pain. Blood blisters and two nails are going to come off.

I ran just a few minutes ahead of projections early in the day, which ended up in the bank for later. The first 19km into CP1 (Clackline), you are not allowed any crew. I ran the first 10km with the lead guys. Their pace quickened when we hit the 8k road section before CP1 and I watched them increase the gap, as I stayed within my own pace and plan.

As the sun climbed and the temperature inched up to 24 degrees, the lead guys started to falter. I passed three in the 8k grind up to the town of Chidlow (55k). In terms of time, I never even bothered to see where I was in the big picture. I just pulled out my splits every time I saw Rolf (every 6-12k after CP1) and went section-by-section, in bite-sized pieces.

The crewing part basically went to plan. Rolf forgot to hand me my fuel out of CP 3 when he had to hand me my headlamp and vest and spare batteries, along with water. That gave me a bonus 200 mtrs as I had to run back, yelling frantically for Rolf, hoping he wasn't gone yet. That must have thrown him off, because then he showed up at the wrong junction next! He was to meet me in 7k, but there he was at a 4k road crossing, holding out my water bottle and fuel! He watched me run by yelling, "This isn't Parkerville!" leaving him to madly figure out where Parkerville was and whether he could get there before me (he could and did!).

At the 60k mark (CP3 aid station), I knew I was still on track. But I thought it fell apart seriously after that. I was stupidly hot, pouring water over my head when I could. Then I passed another runner around 70k, as he was working through his own bad patch. And I realised that in over 40km, no one had passed me. That suddenly told me something - we were all suffering, not just me. So...hopefully that meant the girls behind me were suffering, too. But I couldn't rest easy on that (terrible thought, wishing suffering on people!).

At the 80k mark, I met Rolf at the final aid station. I dumped another bottle of water over myself and almost swore aloud at the shock of cold. The next section was the 15k climb. In my head, I cried woefully, "I don't know how I can do this!" But I didn't say it aloud. It wasn't helpful. And I frankly didn't have the energy. I didn't even register the faces of the 20 or so people there - they were just saviours with kind words and water. Rolf stopped crewing me here with the jeep. We were allowed pacers from the last aid station. I'd never used a pacer and don't like running with someone when I'm racing. I like to be on my own and am good at motivating myself. But here was a first time chance for Rolf to run with me during a race and see it up close. And for us to run together (getting him a long run in?) I also thought seeing him with his fresh legs would be inspiring. He's got a parkour streak in him :)

The trudge up the 15k hill I wanted to be at a 5.45 pace. Well, that was without really looking at the actual elevation grade or considering that now I was carrying 1.5ltrs on my back. Make that a 6.20 pace. Rolf kept looking back for girls. That was helpful, as it was an effort for me to even think about looking behind me, let alone trying to turn my body! We passed one guy and his pacer, which put me into 3rd position overall. I only looked at my Garmin to watch the time for fuel and electrolytes. I ate to desire, but also made sure it was no more than 15 minutes apart (if I wanted more sooner, that was okay). I couldn't even look at the distance marking. I couldn't bear to see it say anything other than "15k" which would mean the top of this eternal, torturous hill.

Between 6 - 7 km from the finish, I wanted to know the time of day, but couldn't find the energy to press the buttons to get that screen up on my Garmin. I asked Rolf what time it was. 3:44 PM. Okay, I didn't really register what it meant. I just wanted a goal to aim for to the end. I said, "7k x 6 minute/pace means I might finish in 45 minutes...4:30. But I just have to see how it goes." It was mostly downhill for 6k.

We carried on and I micro-managed my fuel and electrolytes. Then I saw the road crossing and roundabout up ahead - I knew that meant about 1k to go. I said, "What time is it?" Rolf said, "4:18"

It sunk in. "4.18! Oh my god! We're awesome! We're gonna do it!" I suddenly realised that we were really going to run the race that I had put down on paper, even though I had not once looked at time of day and my position in the big picture to see where I stood. And I thought with how much I was suffering the last 30k, I must be at least 45 minutes over projection.

I hit the line, stopped my watch, and it read 9hr 24min 21sec. That's what I wrote on paper. Insane. What are the chances? I broke the former female course record by 1hr 33mins. I finished third overall, with the leading men coming in at new male course record times of 9.02 and 9.07.

I think having my iron stores up (related to the issues I've had in the past 6+ months) may be a pretty big thing. Oxygen transportation. Fairly vital. Still waiting on results from my surgery and recent blood work, though.

Painkillers taken: None, as usual (mask the pain, run myself into an injury or run like an idiot because I can't feel my form).

Two days later and I am still trashed. My body is fairly traumatised, which is fair enough. I get hungry, but my taste buds are off. Everything feels like an effort and I breathe heavily on mild exertion. But I've been through this before - setting the track records. I know the drill and I'm taking good care of myself. Nutritious food, lots of water, short walks, elevating the feet....

I have aggravated the left foot again just a little bit. I had a right hammy insertion issue late in TNF100 and it came back for Kep. It started as a tight addy/hip flexor and moved into the glute/hammy as well. My right psoas was tight before the race and I was doing self-massage. All this right leg stuff might be compensation related to the left foot issue - if I was adjusting my stride slightly to spend less time on my left foot, it would aggravate the right after 34,000 footfalls. Much as I tried to consciously watch my gait.

I really, really don't want to be injured again. I have just asked some serious stuff of my recovering body in the past month. So, naturally, it's not the right time to go for that 225k/24hr. It'll probably be more fun to wait until my AUS citizenship comes through, anyway. So, I'll take two 100k races with 5500 mtrs over the 225k right now.

Recovery time! There's a lot of healing to happen so I can come back strong(er) again. Now I'll go back to cheering some others to their goals. Yee haw!

Yes, I know this all probably means I could do my 100k track faster. But I'm not going to. At least not until I'm in the W45 age group ;)
Posted by Bernadette Benson at 10:25 PM