Yup, I'm back to the research! I took a digital wander over to the Journal of Applied Physiology's latest 2012 volume (would a Journal of Unapplied Physiology contain articles on the best ways to lay on your sofa and eat crisps??)

A brilliant set of studies has just been released from a group of Swiss and French researchers on altitude training in one of those purpose-built houses that simulate altitude. This one is a French state one located at 1,135mtr above sea level. But they can simulate the air inside as they like. This is the same idea as those tents you read about - where you can buy a tent to sleep in within your own home.

It's long been argued that the effects of altitude training might be placebo. And perhaps there's a group training effect when you go to an "altitude training centre" as these places are filled with other highly motivated athletes, you're away from work, and focused on athletics.

Previous research studies have all been unblind - that is, everyone knows whether they are in the "oxygen-starved" group or the control group. So, there's another argument that the control group will be less motivated in a research study because they know the other group is getting this awesome training advantage (supposedly). That would make them less motivated. This is a "nocebo" effect. I know I'm getting nothing and the other group is getting the best, so I feel and act as if it's hopeless to try.

This group of studies was done double-blind. It's the first one ever! They put 16 endurance cyclists in this house for 8 weeks of study. They could oxygen-control each room separately, so no one knew which group they were in. And they moved their rooms and roommates around every week. When people were asked to guess which group they were in, their guesses were no better than chance.

The studies were really very elegant, but I won't go into all the details here (J Appl Physiol v112 pp.106-117 and pp.2027-2036). They took measurements of everything - muscle protein biopsy, VO2max, hemoglobin mass, plasma lactate, plasma pH.... They tested the cyclists in sprints and in longer endurance rides.

The altitude they simulated was 3,000 mtr above sea level. Of course, here's the crucial part....The barometric pressure stayed the same (the same as the pressure outside the house, which was 1,135mtr). They reduced the oxygen in the air (replacing it with nitrogen, as is standard in these houses and tents). So this is called "hypoxic" (hypo - lack of / oxic - oxygen). Stay with me, because you are going to sound so cool during your next long run with mates...I mean, how much longer can you go on about minimalist running or Kilian's Jornet's YouTube videos? ;)

Right, so we have a hypoxic setting (low oxygen), but "normobaric" (normal pressure). That means basically that the pressure of the atmosphere around you trying to shove oxygen into your red blood cells is unchanged. At REAL altitude, the amount of oxygen in the air IS ALWAYS the same as at sea level BUT the pressure is lower.


Since it's a very complex engineering kinda thing to try to adjust air pressure in these tents and houses (pressure valves...things could blow up), it's much simpler to just decrease the oxygen to mimic the same reaction your body goes through when you're at altitude (no pressure to push the oxygen into your red blood cells).

The findings of these studies?

No change between groups to 30 second all-out sprint, no improved endurance, no improvement to VO2max...no improvement to "muscular and systemic capacity for maintaining pH and K+ balance during exercise...." What they did see was a trend towards improved performance in both groups, suggesting that just consistent training itself was positive.

This is powerful. It suggests strongly to me as an athlete that I don't have to worry at the start line when the runner next to me says they've been living in an altitude house sponsored by their government for the past two months. Their advantage is only placebo - if I believe it works and they believe it works, they might have an advantage. But I believe it doesn't work now (if they've been in a "normobaric" house or tent) and I'll be sure to cite this research to dampen their placebo effect ;)

"Live high train low" has been getting increasing press for a few years now. We know living and training high isn't the best because you simply cannot work as powerfully at altitude due to this pressure problem of getting oxygen to your cells/muscles. Over time, you WILL lose power/speed. So, if you can sleep high but train below 1,500 mtr, you get the best of both worlds. That was the idea with the houses and tents.

Now, this research suggests strongly that the only real option left is to live on a mountain and drive down to the bottom each morning to train to get max performance. Not many people will live in such a geographically perfect position.

For me, consistent with the previous research I did two years ago, I will continue to arrive at altitude events about 3 days in advance - this acclimatization appears to be enough time to allow the majority of red blood cell changes to occur but isn't long enough that I'll get a negative impact to my speed (my speedwork is over by then).

But don't let me get you all down about having nothing to do with the thousands of dollars you've been tucking aside, living on a diet of highly processed white bread and 2 minute noodles, to get that tent or get to that altitude house. 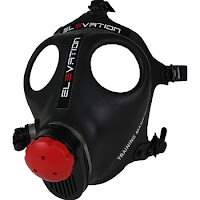 There's always the altitude Training Mask or Powerlung, which will leave a lot more money in your pocket and show the same (non) effects in studies.

Or save even more money and go for the Altitude Training Beach Towel! Personally, I'm going to try taping one nostril shut and running with a straw up the other one tonight.

Posted by Bernadette Benson at 9:29 PM