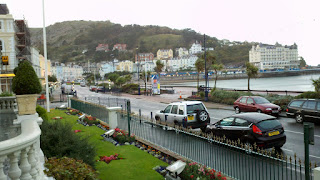 Welsh, the language of the dragon, is alive and well in Llandudno, Wales, where we were hosted for the Commonwealth Championships.

As many have probably heard by now, things in my race did not end according to plan. Although I'm frustrated that I got some minor chafing (sports bra) and stiffness in my legs without the trade-off of a good performance, I'm not overly upset about the whole thing. I've had a stellar year and am really pleased with what I've accomplished, how much fun I've been having with my running mates, and that I have done it all without getting injured, despite the intensity.

A fantastic Canadian mate, in his first ever 24 hour race (extraordinary performer in 100 Miler trails), managed to break a M55 record at the event - that was pretty awesome to share in. Another mate from Perth took a silver medal at the event with a PB performance, too. And of course I was able to see Lizzy Hawker do her thing to set a world best performance (subject to ratification). 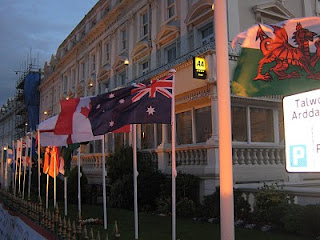 Some race detail (warning - there's a lot of detail, but that's because a lot of people are asking me for details and because when I fail I need to know why so the same mistake isn't made again):

The race started at noon in good conditions - about 16 degrees and mostly cloud, with a strong headwind for 500 mtrs before the turnaround on the 1 k loop. The headwind actually provided a nice cooling factor.

I ran at target pace for the first 6 hrs and was at the time in 4th female position with a 65km total. I was actually 1 km higher than planned at that point. I was trying to be careful not to go any harder, as I knew that could really spell disaster later. It was probably around the 5 hr mark that I started to feel the nausea. 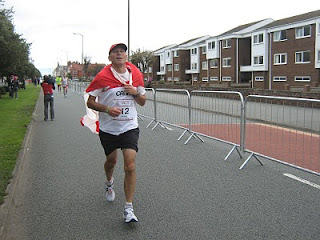 At 9 hrs there had been no change to my yucky stomach feeling and had slowed slightly more than planned. But with over a km in the bank, I was still fine for my goals. From 9-10 PM, however, my continued slower pace took its toll on my targets.

At midnight, where my goal was to be at 124k, I was only at 118. However, I was able to maintain my pace from 10 PM through to 2 AM, staying just 6kms below my goal each hour - no further slowing. By then we were trialling different fuel sources because I was having so much trouble getting the Hammer Perpetuem down. Anytime in the past, if I'd had any nausea, we just adjusted my fuel and water concentrations very slightly - as little as 10 cals/hr or 50 mls/hr - to get me right again within an hour. On this night, I'd had the same sick feeling since the 5 hr mark (5 PM) and couldn't make headway.

From 2 to 3 AM I lost another 2 kms off my goal - I was taking more breaks, trying to find a way to get the stomach to settle. I wasn't vomiting - just felt terribly queasy. Rolf and I did some brainstorming, running through my nutrition, hydration, electrolyte usage, toileting.... Then we hit on the only thing left - my Hammer Perpeteum fuel must have been spoiled. Way back in March or April, I had received a container in the post and it had been busted open - the seal was broken and loos 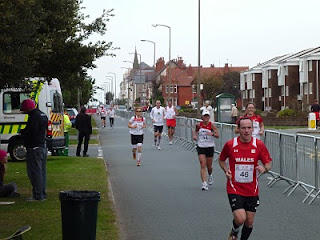 e - some powder was floating around the box. I noticed that it had little granules in it. I figured that was the result of moisture getting in. But I wasn't even thinking that the damage to the container may induce some kind of spoilage. I used this fuel for the next several months, but somewhat sparingly, as I wanted to make sure I wasn't sick of it for each competition. I took the tub to Canada, took a bit to Ireland's World Trails (also used Solids there), and then the rest to Wales. Before going to Wales, Rolf asked me whether I thought the lumps were bad - they wouldn't dissolve in water. I didn't think so - thought it was just some kind of moisture absorption with a sugar. The fuel smelled and tasted fine. But Rolf also told me later that when mixing it during the race there were grey "snotty" threads in it - which I've never seen or heard of before.

Since the event, I've had some e-chats with Hammer Nutrition people and have done a bunch of online searching, trying to understand what might have happened from a chemical perspective. We're all in agreement that the little granules were the l-carnitine amino acid having reacted to exposure to moisture - it's hydroscopic. That wouldn't have caused nausea though.

That leaves us with the carbohydrate and protein. The fuel wasn't exposed to heat, so the idea of some sort of negative denaturing effect of the protein doesn't hold up - and many proteins are denatured anyway (e.g., cooking an egg) with no ill effects to humans.

So, the best theories at the moment suggest that (1) the protein was degrading slowly over time, which caused the ill effects and/or (2) that 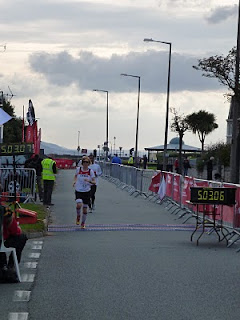 the fuel was exposed to bacteria when initially broken open and likely increased with each subsequent opening. Bacteria would have fed off the sugars in the carbohydrates and perhaps somehow that could have caused an ill effect. The ill effect may have been caused by the fuel having less nutritional value (if the bacteria had consumed and converted many of the natural sugars my body needed as fuel) and/or may have been caused by the byproducts of this conversion - say if an acid was the byproduct of the bacterial process.

So, as of now, we still aren't sure of the chemical reactions that caused my pervasive nausea, but we feel confident it had to do with the container being excessively exposed to air/moisture. I certainly have no doubt that this fuel is still the one for me - nothing compares to its composition, in my experience. Switching to more 'simple' sugars during the later stages of the event made it more challenging to get the calories and nutrition necessary to keep my energy stable. But I will be more diligent about the storage of my product - and would not eat any "old" product that had been left open a long time or opened multiple times.

As a last resort at the comp, Rolf suggested we try to "reset" my system by making me vomit. He wanted me to down a huge load of calories, expecting me to chuck it up, but I couldn't make myself. Instead, I was willing to try to "sprint" to make it happen. I went out and ran 4 fast laps, but nothing changed.

It seemed all my personal goals were gone. I had a chat to the team manager - Canada had no chance for a podium position - our girls were not having a good day. So there was no point in me continuing to slog around the course. We had worked the nausea for over 9 hours with no change. It had mentally beat me down and physically taken a toll on my pace. It was the most challenging thing for me to run with that discomfort for so long - completely inward-focused, I did not have the mental energy to cheer on my fellow runners. I felt completely selfish - often the most I could do was offer a quiet thumbs-up to others. Physically, I know what I'm capable of, so beating myself up further seemed pointless. Better to stop and let the body heal. 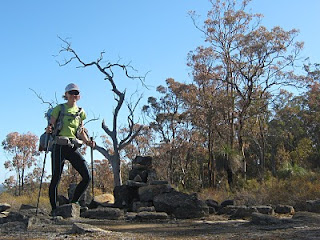 T (fastest known time) attempt in about a month's time. I was then planning to race Coast to Kosciusko (C2K) in December to finish off the year. But as I sit back and consider where I want to go with my running over the next year, my heart's not in C2K at the moment. My heart's in the FKT and in getting back to running with my Perth-mates and getting my Perth Trail Series off the ground well. So that's where my energy will go for the next few months.

If anyone has a food chemistry/nutrition background and has further theories they might suggest for what happened with my ruined fuel, please send me a private message. I'd love to chat about it.

Addendum (June 2017): I returned to Perth and continued to have random nausea episodes, even when not working out. A blood test in late October 2011 revealed extremely low iron stores. The sports doc was surprised I wasn't totally fatigued all the time. I've been on Ferrograd-C iron ever since, monitored with regular blood tests.
Posted by Bernadette Benson at 11:51 PM