I know. Lousy title. Not feeling creative tonight, but these are the things I wanted to blog about. 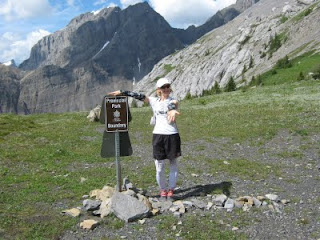 Starting with mountains... ahhh, I'm lovin' them here in Canada. It's been so long that I've been away from them. My altitude lungs have finally arrived. So the big climbs at 2000 mtrs+ don't hurt anymore.

My Sunday run was 43kms up and over the North Kananaskis Pass from Alberta to British Columbia. We tried to "make it a loop" (famous last words of Trailtrash!) by dropping 600 mtrs down into the valley behind me in this photo - where I tried to collect park entry fees - but we got stopped after 3k in the bottom when we hit an avalanche blowdown area. The trail was gone and 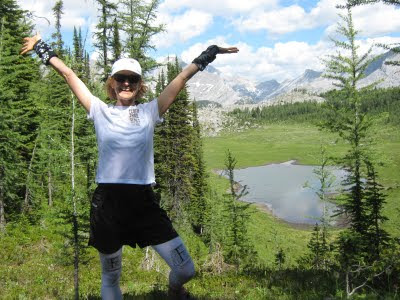 we were bushwhacking, climbing over downed conifers and big boulders for about a km. We reached a critical point then. We were technically halfway, but at 4.5 hrs with no idea about the condition of the trail ahead of us. It's a "black dot" route per the map - meaning not nice maintained trail. While we consulted the map, I kept the bear spray in one hand, as we watched a very suspicious looking black blob on the hillside above us. A few years ago some of the Trailtrash group tried to do this loop and got lost and were out all night. We didn't have headlamps and fuel was going to become an issue, so we made the call to turn back. It was a wise choice. There was a chopper that swooped by us a few times and finally caught us several hours later at a backcountry campground - they were looking for a group of 3 girls apparently lost in that area we had been to.

On the run, I took out my prototype Perth Trail Series shirt. I had gotten one printed onto a plain Saucony tech shirt to see how it looked before doing mass prints. The ma 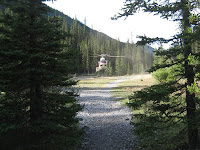 ss prints will be sublimated to ensure a good "stick" of the logo. The prototype was just done as a heat transfer. I knew it wouldn't be very durable, but was surprised at how quickly my hydration pack wore down some of the bright colours on the back. The sublimated ones will be perfect. I'm using the same company in Perth I used for some other logos that have been tested on product for over a year with no fade. The slogan? Uncivilise yourself. Watch for another prototype to be flaunted around Perth trails soon!

Okay, last topic. Tendons. Someone asked me about prolotherapy the other day. That was a new one. The premise? Glucose injections into weak tendons. It causes inflammation, which is supposed to promote an "inflammatory response" and thus healing (strengthening/rebuilding) of said tendon. It didn't sound quite right to me. And the stuff I saw online was saying you'd also need one to two months of rest. Well, coincidentally, after one to two months rest and NO injections, a tendon is probably going to be healed. So I went hunting for peer reviewed science today.

I came across a great recent review in Lancet (vol 376, pp. 1751-67). Efficacy and safety of corticosteroid injections and other injections for management of tendinopathy: a systematic review of randomised controlled trials. I think this is timely, as well, as I hear of a few others with tendon injuries thinking about or undergoing injections.

Their summary of 41 randomised trials, including 2672 participants, indicated:

"...corticosteroid injections reduced pain in the short term compared with other interventions, but this effect was reversed at intermediate and long terms." [T 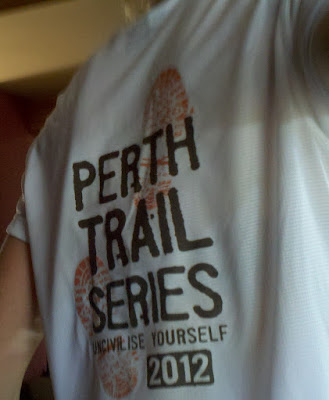 Indeed, their discussion of the corticosteroids reports that it's beneficial in the short term, "... but is worse than are other treatment options in the intermediate and long terms. Use of corticosteroid injections, which are potent anti-inflammatories, poses a clinical dilemma because consistent findings suggest good short-term effects but tendinopathy does not have an inflammatory pathogenesis. Altered release of toxins and inhibition of collagen, extracellular matrix molecules, and granulation tissue might provide a biological basis for this effect. Our systematic review challenges continued use of corticosteroid injections by providing strong evidence that they are worse in the long term than are most conservative interventions for tendinopathy." [I've read a lot on this and even my sports doc cautioned as well on long term effects of steroid injections - beware, runners - short term gain may be long term loss].

"...platelet-rich plasma were not more efficacious than was placebo for Achilles tendinopathy, while prolotherapy was not more effective than was eccentric exercise."
I actually thought there was better research behind blood injections for the Achilles - maybe it's the period of rest that's doing more good in those it helps. Good to see eccentric exercises still getting support. I used eccentrics to treat my adductor tendonopathy, on the advice of two of Perth's best physios. And I still do eccentrics 3x/wk for adductors and calves (which support the Achilles).

The article admits there are still lots of questions to be asked and angles of research to consider, but all in all, it's a worthy summary read of the status of injection treatment for tendons.

I hope my research-driven posts aren't taken as lectures from "mum." We all walk (run) our own paths and need to choose our own courses, but I hope we make those choices with knowledge of as many of the potential consequences as possible for taking any given path. The research helps me make those choices, which can so often be emotionally driven.

Posted by Bernadette Benson at 8:16 PM