Snippets from other World Trail racers

Maybe it's just that I need to commisserate, but I have found these posts reassuring...and funny

There was no trail, just random posts sticking up from the bog. We followed this for a while, and then headed across a large open stretch. I was watching the French runner 100m ahead of me when he suddenly disappeared in a splash of water. I thought he had tripped, and laughed as I asked how the water was. As I got to the spot where he fell, I was swallowed by the bog past my waist. There was a bit of a panic attack before I managed to pull myself out....The steepest sections required the use of your hands, and the easier grades were 20-25%. 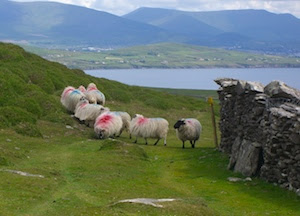 I'd never encountered anything as steep or tough in a race and even stopping had it's hazards as the steepness made it very easy to lose balance and it was almost like taking a break during a rock climb.
Total Ascent = 2950 M
Total Descent = 2989 M

Boggy areas are wet and muddy, but when you step in an actual bog it’s not like being in mud really. Nor is a bog like falling in a hole or a pool of water. It’s more like stepping into a tub of oatmeal. On the surface it looks like it might be solid, but once you step in the bog you sink to some random depth, completely surrounded by some type of earth.

The next undulating boggy section saw me fall flat at least 4 times, at one stage going straight in to a head over heels roll twice in quick succession. One of the Army boys must have been wondering if there was a points competition for acrobatics, running concurrently with the race.

I found this book and was thinking it might complete my recovery ;)

Too bad I was given a hot tip on race technique after the race.... apparently I should have had a snorkel and fins! That's how they do it at the World Bog Snorkelling Championships in Wales every year.