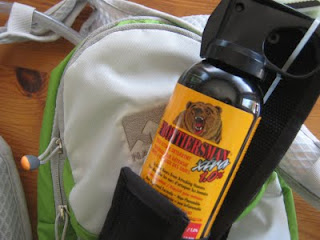 Bear spray is heavier than the tensor bandage I usually carry in Australia (for snake bites), so I've decided I need to bulk up.

Nah, that's not it. Although the stuff is heavy!

Data has been coming in over the past 6 months or so suggesting to me that I should be doing some upper body work. Previous info had suggested to me that this was just a waste of time and certainly that runners didn't want bulky muscular arms to lug around for hours on end. Lighter is better.

Well, I've been coming across more data suggesting that strength training to the upper body (not just legs and core) can also improve running economy and oxygen efficiency. And I've been seeing anecotal reports that people like Ann Trason and Yiannis Kouros regularly did light weight upper body work. So, being careful not to add a bunch of bulk to my upper body (more muscle does mean more blood/oxygen will have to fuel the area during a race, leaving less for the legs), I've decided to add some upper body strength training to my strength programme.

On Friday, I started by seeing how many pushups I could do.

It turns out I have arms like a brook trout. If brook trout had arms. You can imagine. My brother suggested they were tyrannosaurus rex arms. Not a nice visual, either! The pushups are simple, yet seem to target the chest, triceps, biceps, and core all at once. I am now doing 40 pushups, but broken into sets of 5 pushups with rests between, where I pace, curse, and complain bitterly. My goal by September's Commonwealths is to be able to do 40 pushups in a row. We'll see! 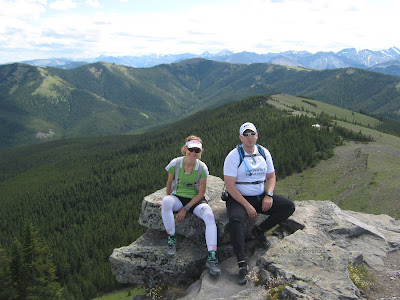 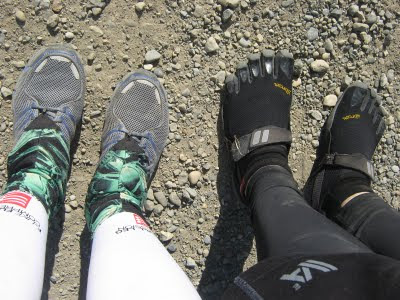 In terms of running, I'm on a "recovery" month now - the rest of July is a half-mileage month, while I start to bring up the strength training. This allows my tendons and ligaments time to heal themselves before I ask them to prepare for Commonwealths.

So I skipped the 40k 7.5 hr Trailtrash weekend run in favour of a ~15k jog/hike with my brother-in-law and sister the powerlifter. I was "good" to them by suggesting we'd do the Cox Hill route in the "easy" direction (650 mtrs up and 800 down). Back up to 2,200 mtrs, where it feels like one lung was left in the carpark.

Although we really did have 6 lungs between us, we only had 4 shoes. Jer forgot his and had to do the entire run over the mountain rocks and roots in his 5 fingers!

On the way down, I heard a call of "bikes!" That's the alert that mtb'ers were on their way down behind me. Well, the race was on! I held them off as long as possible. It was heaps of fun and two of the four never did catch up to me. In honour of the great race, I gave the two blokes a Timtam each in the carpark. Of course, I didn't call them blokes, cuz that isn't a Canadian word ;)
Posted by Bernadette Benson at 11:56 AM