I'm still waiting for some photos, but people have been asking for my report.... A few more photos to come soon.

16 DNFs out of 115 starters of the World Trail Championships. A 14% DNF rate for an ultra is probably considered pretty low, but considering the tough nature of this course, it's even more remarkable to me. 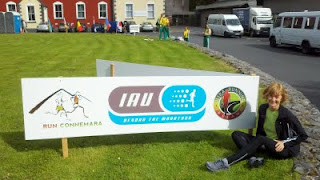 Except perhaps for the Irish and French runners who I heard reconned parts of the course, I don't think anyone expected the "bonus" 1,400 mtrs of elevation gain (advertised as under 1,900, but apparently 3,200) and the "bonus" bogs. Advertised as containing 7 percent bogland, the reality was that the 2% of “woodland trail,” 4% of "grassland trail" and 18 out of the 20% of "mountain trail" sections were also bog. That's a course that was about 30% bog. There was more water on that course than Western Australia sees through its entire winter.

The trip over to Dublin was quick compared to the day of buses that followed. A 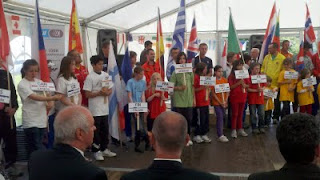 thletes from 20 different countries were spread throughout the Connemara region, billeted in homes, a village post office, B&Bs, and hotels. We had Friday morning to ourselves, which most of us used to sort gear and drop bags. Friday afternoon we attended opening ceremonies, where all the teams were introduced before the pasta dinner. Getting to and from the Canadian lodgings required a bus shuttle. It was only about 4 kms, but none of us was willing to put the extra miles into our legs before the event.

Saturday morning temps were probably around 14 degrees, cloudy and calm. We headed out for 4 kms of road, which was meant to separate the group a bit before getting onto the trails. The top men sped off. I settled into what felt like a 4.40 pace (Garmins aren’t allowed in these international competitions). Off the road, we started our first climb of Diamond Hill. It was a defined trail built with rocky steps, which were all wet and slippery. I had made the mistake of eating breakfast, which I never do. Although it was 2 hrs before the start i 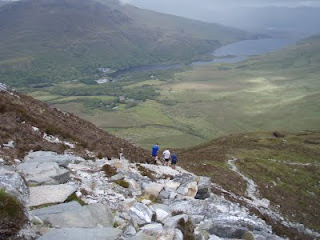 t seemed to not have digested and caused me some nausea. I was passed by several women on this first climb as I had to temper my efforts. We descended the other side and came through the village of Letterfrack at the 12k mark, which was also to be the finish line. I had made some very rough calculations of paces and times and was just 7 minutes over my guess. The picture here from near the summit of Diamond Hill is actually of some Irish guys who reconned the course on a dry day.

The next section had us climb back up and over Diamond Hill. Then we hit our first bog section. The ground was full of “hummocks” – it was very spongy and presumably sheep had travelled through the paddocks many times over the years. Their weight punches holes in the sponge earth, leaving the raised bits of earth that aren’t particularly solid and supportive. Landing between hummocks guaranteed water to at least the ankle. Landing on a hummock gave no guarantee. Maybe a dry step (doubtful), maybe some sinking, or maybe your foot would slide right off into the water below anyway. Running it created a solid sucking sound and feel with each step, as the bog tried to claim your shoe. Ind 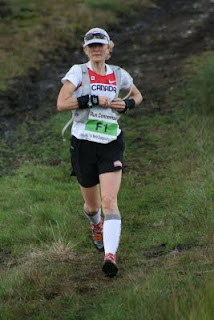 eed, the bog tried to claim me in my entirety at one point, as I stepped left foot into what I thought was going to be calf deep water. I went in to my armpit. Straight down. The guy behind me said all he could see was my hat!

Out of the bog, we hit a small potholed country road, which provided some relief. Though within a few kms, my hip flexors were expressing displeasure at the repetitive motion. I was in to Aid Station 2 (28k) about 30 minutes after my rough projected time. This was useful, as it continued to give me a bit of a gauge as to how long the race might take – for fuel needs, pacing, mental coping, etc. After Aid 2, we continued for 4 kms along a beautiful little road lined with pine trees. Great smell. My favourite section. An orange vested Irish National Defenceman signalled the way off the road to start the big climb up and over Benbaun, one of the 12 Ben mountains in the Connemara range. The ground – "mountain trail" section – was ... guess what? Bog. There was actually no defined "trail" at all - just wooden stakes placed in the ground to mark the route. It seemed that there was no solid grass to be had in western Ireland. It made me long to work towards the summit, as I felt the ground should get harder and rockier towards the top. I was thinking of Canadian Rockies, I guess, where the snowmelt comes down in the spring and soaks the lower areas, but the top areas have dried out. This isn’t what happens in Ireland. They have bogs right up to the top of their mountains. And sheep to punch holes in it to make it more difficult. I started to think the sheep were laughing at me as I heard their "ha-a-a-a-a" bleats when I went by.

Over Benbaun and down the other side. It took 2 hours to cover 12 kms into Aid Station 3. I had originally predicted this section to take 1h40. I headed out for the 4k out-and-back (i.e., 8k), which was supposed to be runnable gravel road. I had my doubts at this point, but there were only a few muddy bits. Back at Aid 3 in 45 minutes. I now had to reverse back to Aid 2 over Benbaun again. The second time around it took me an extra 15 minutes. It took the top women longer to go back as well, but overall they were just that much faster on the hands-and-knees steep bog scrambles up and down the mountain.

Somewhere in that first climb of Benbaun, as I passed a few female runners, including a British girl, I started to think that perhaps Canada could take 3rd place in the team event. I paid careful attention to the women passing me on the out-and-back section, as they headed towards the finish. French and Italian. More Italian. And more Italian. Wow, they had a big team. But only the top 3 finishers of each nation count towards the team score. So I used this possibility as my incentive to hold the pace. Into the finish, I passed one more British girl (and was passed by a Hungarian girl on a strong surge, but was sure her two teammates weren't in front of me).

As I rounded the last bend, with 200 mtrs to go, the Canadian team manager was there and handed me a giant flag to carry into the finish. It was just like the movies. Only it was me. The "diesel cat." A regular trail runner from 3 years ago, suddenly running across the finish line at a world championship.

The rest of the evening I found it hard to walk past that finish line without feeling tears well up. It was the hardest thing I've done. Thanks to everyone who's helped me - these past few days, months, and years.

Do not accept impossible.
Posted by Bernadette Benson at 2:54 PM