I was initially disappointed to have no one to run with today. But the list of running wounded is high right now (ruptured tib post, strained MCL, patella femoral syndrome) and if not injured, almost everyone I knew raced the Kep Ultra last weekend. So my invitation to run 4 hrs of hilly trails didn't cause a lot of excitement! 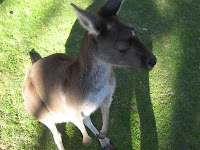 Showing up at Serpentine (just me and the roos), my initial plan was to check out a short section of trail, I was guessing would be 4k. Then, I was going to run "the usual." 15k to Jarrahdale, top up water, and 15k return. First, I took a very short diversion to see the Serpentine Falls, which I've never gone to see. It's in a really cool little box canyon-type formation. The kind of place you'd chase the bad guy into on his horse if you were John Wayne. 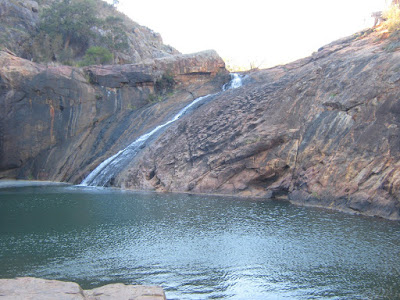 After 2k I got a text confirming that my one potential running partner was not going to meet me in Jarrahdale. So, plans changed. The run suddenly turned into an exploration, which would be heaps more fun and give me a chance to check out routes for a Perth Trail Series race. I did run to Jarrahdale, but I did it on a new route that I made up along the way. I love trying to get myself lost.

So, ... Jarrahdale. You know that feeling when you're dressed all wrong at the party? Well, that's what it was like when I rocked up to the Jarrahdale General Store/cafe with 25 bikers outside having coffee. There was an awkward moment - as conversations stopped or changed - as I ran into "the party" wearing all the wrong clothes. I topped up my Nathan pack at the outside tap and threw myself out ;)

I was only 80 minutes into a planned 4 hr run, so knew hydration could end up becoming an issue (2 ltr pack). Then I headed back towar 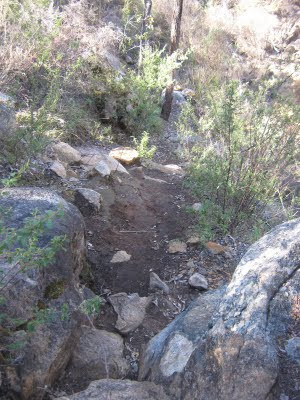 ds Serpentine on the "usual" route, as that's the one that gives the most elevation. At the fig-house, however, I went back into exploration mode. I found several kms of fantastic dirt single track. My legs and feet just loved it after the rocks and pea gravel I'd been on for 27k already. It was very technical, running right along the side of Gooralong Brook in Kitty Gorge, so incredibly scenic as well. These signs started to appear. I had no idea what trails they were nor their distances. Naturally, I had no choice but to run them both :)

Note: the blue one takes you out of the gorge up a cliff. 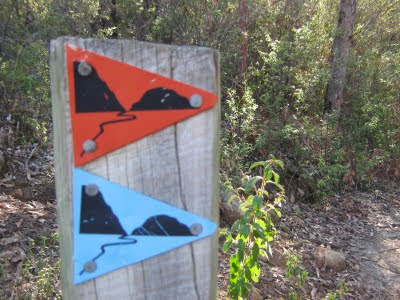 Enjoyed my Recoverite while watching the roos mingling with the picnickers, looking for some people food. Not that I'd feed people food to animals, but I do wonder what they'd think of Recoverite....maybe spirulina would be more their thing ;)
Posted by Bernadette Benson at 6:31 AM