I think it's time to start buying in bulk.

Today I ran the State Masters 5,000 mtr (the 10k was 2 weeks ago - previously reported). A few fast girls I was expecting didn't show up, so I didn't have them to chase. Running out front on my own (the W event ran separate from the M), I followed my race plan and recorded totally even splits until the last lap, where I managed to cut 6 seconds off the lap. I recorded a PB (which is fairly easy when you've only ever done two 5k races), shaving 15 seconds off my 5k time from just last week. But the kicker to me was that I ran a 20k +625 mtr elevation trail run on the Bibbulmun track yesterday.

I spied one of those cool 3-tiered podiums at the track today. I had it all visualised... standing on it wearing a wreath and spraying champagne all over some buff 60 mtr M sprinters assigned to put my W40 gold medals around my neck....

But, no, they didn't do that (does that only happen in F1 and the Dakar Rally?) So, instead, I had a dignified photo taken with one of the many inspirational athletes out there today. Loretta is a most elegant and accomplish 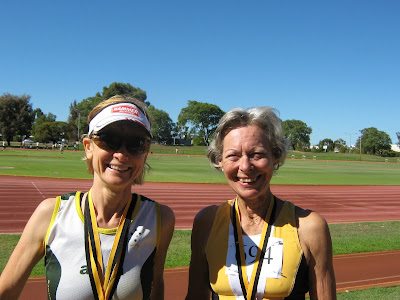 ed woman of 69 who regularly competes in 10k and half marathons and just ran an impressive Athens Marathon last November. I've entered her world of 'short' distance and she's thinking of running an ultra next year!

P.S. Thanks to those of you who voted in the spectator-yelling poll. With over 80 reads per week on my blog, I was hoping for a better sample size, but the feedback I did get was still interesting.
Posted by Bernadette Benson at 2:15 AM