Has been a really good week. My pinched sciatic nerve thing continues to improve - it seems to have "receded" from my calf up past my knee and mainly just flares up in my hip flexor now. Ali my physio says that's a good thing. I guess trapped nerves act like ocean tides.

The more serious speed work I've been doing also seems to be paying off, as my longer efforts feel easier and my short "races" are faster. I also hate it less, which must mean I'm getting more accepting of the efforts necessary for this short stuff!

I'm sticking with the beet root experiment, although I am finding it hard to locate juice, so am trying to secure a juicer and real beets to start brewing my own. After the first dose, where I actually rushed out of the room to brush my teeth and then felt like I was going to vomit for an hour, it's getting easier. I'm even trying to tell myself I like it (the brain can be easily fooled).

I've also now lost a kilo over the course of 3 weeks. I did it by making very small adjustments to my diet because I wasn't willing to go back to the mental disaster that took place before 6 Inch when I calorie restricted too severely. This time I was much smarter about it - doing little things like having sandwiches without the mayo, swapping my 'low carb' bars for bars that are actually higher in carbs but much lower in fat .... In theory that kilo will give me 15 mins over the 100k at Coburg. That makes me feel much better! 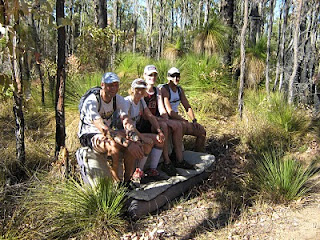 0 mtrs elevation, so not really hilly, but lots of loose gravel to work the quads and hammys. Good company and even some blood spilled (not mine, which is even better). Got to try out the Hammer Perpetuem cafe latte liquid, which I quite liked. I'm thinking during my next race I might start with orange and then add a bit of cafe latte later in the day to make a whole new exciting fuel option! ;)

I've got to start bringing back the length of my long Sunday runs now in preparation for the Coburg National 24hr in 2.5 weeks, which is always a bit of a downer. But after Coburg, I'm doing a 3-4 day fastpacking run on the Bib track in preparation for my planned end-to-end run in October. With the help of supplies from Mainpeak, I'll be trying out poles, sleeping gear, etc, for next spring's fastpack. I was in to the Cottesloe shop yesterday and the guy I talked to there really knew his stuff - he's a mountaineer and he's helped prepare many people for end-to-end trips, including one guy right now planning to do a 12 day trip (it's 1000 kms). I don't know who that is, but if he succeeds, that'll blow the men's record out by 4 days. I also don't know if he's supported or not, because it makes a difference to your speed if you've got support along the way and don't have to carry all your food and sleep gear. But supported or not, 12 days would be a massive new (unofficial, as all Bib runs have to be, since it's not a race where everyone runs the same course at the same time) record.

Next month sees a lot of WA'ers racing big - a few of us are going over to Coburg, plus a few are headed to the Canberra marathon and 50k. This weekend is also the WA 40 Miler (which I'm happy to give a miss to, as I've never bonded with that race). And there's also the 24 hr Relay for Life coming up the same weekend as Coburg, which a few ultrarunners usually use to practice speed and/or exhaustion. So some of us will be on tracks at the same time in mid-April, albeit in different states. April's going to be very exciting!
Posted by Bernadette Benson at 9:48 PM