In the Name of Science

Enough of my ramblings. Let's get back to important things: cold, hard science.

Our days of "altitude training" in Perth are going to come to an end in the next few weeks (as discussed in earlier blog posts - the changes in partial pressure in extreme heat conditions equating a 40 degree day to 1700 mtrs elevation).

So, what else can give us that little advantage? 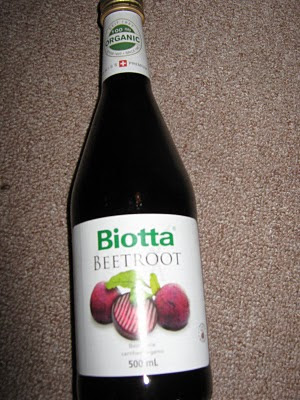 Now, I grew up in a country where we said "beet" not "beetroot" (just as we didn't say carrotroot), but really, it's not a word we said much at all...unless it was, "Please remove that beet from my plate." I think I only knew one person who ate beets. I'm not sure I've ever eaten one, but I'm sure I don't like them.

Nonetheless, the literature coming out is pretty convincing, so it's time to grab a clothes-peg and get tough.

If you'd like to check out the literature yourself, there are great articles in the Journal of Applied Physiology and Am J Physiol Regul Integr Comp Physiol 2010/2011. This seems to be hitting the journals by storm right now (or I've just been missing it all along).

Basically, some extremely compelling studies, including double-blind and placebo-controlled, are indicating that beetroot (and other high nitrate root veggies such as carrots and cabbage) lower blood pressure (~4% in healthy people), lower oxygen cost (VO2) in sub-maximal endurance efforts (~4%+, depending on your daily intake of nitrates already), and suggest long term positive effects on VO2max and lactate threshold.

The only mystery is exactly how it works. The way I understand it, nitrates (NO3) break down into nitrites (NO2) through anaerobic bacteria in your saliva and then into nitric oxide (NO) through other means. We already know that nitro sprays are used for vasodilation in people who've had heart attacks.... But there's this old body of research from over a decade ago that said we should stop eating processed/deli meats because of the nitrates and nitrites in them being cancer-causing. So how can those be cancer causing and yet good old veggies aren't? I mean, logically, veggies shouldn't cause cancer. But what's different about the nitrates in processed meats? (I don't eat those meats, but still, the question is important).

I'm mentioning that last bit because if you also decide to take on the beetroot experiment, I want you to appreciate there's still a factor of "we don't know if anything bad happens to humans after long term supplementation with high nitrate foods" in the literature.

Bottoms up!
Posted by Bernadette Benson at 7:02 AM