Just back from Coburg (Melbourne) with a night to unpack, wash stinky clothes and otherwise regroup before settling back into being a normal worker bee tomorrow.

The 100k race became a goal for me before Christmas - probably after my 6 hr race. Being summer in Australia, it really wasn't the best time to chase records. That proved to be very fortuitous. I was better able to treat my right sided tendonopathies and start in on some more serious speed work. To maintain, I had massage, physio, and/or sports chiro at least once/week.

Race day weather was pretty good - a bit of a cold wind, which was refreshing for those running, but hard on crews. We arrived late to the track, despite the fact we were staying only 20 minutes away. I ran in to the race briefing midway and was still pinning my bibs on the front and back when I heard the 1 minute warning! Way to get the adrenaline and cortisol going early! Fortunately, Rolf and I have done this before and had systems. 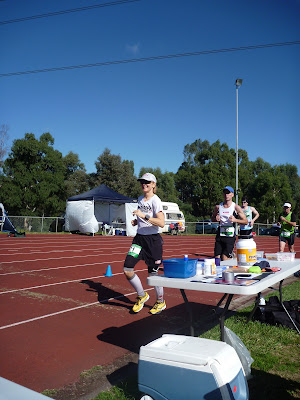 The plan for the first 3 hours had me sit on a 5.05 pace with no breaks. The whole 100k race plan allowed me only one 5 minute toilet stop. Gotta get your hydration right for that! I was running a bit fast from the start, as I felt really good. So I had to keep slowing myself down. While it's nice to get some extra distance "in the bank" it's also a risky move, as one can just end up shattered well before the finish line.

Somewhere around the 5 hr mark I got into the business end of things. I tried to hold it off for as long as possible, but then there it was ... to deal with for the next 4 hours.

It was also the warmest part of the day (3PM). I made a passing comment to Rolf that I thought I might have to let the 100k record attempt go. There were no more smiles from the Fire Chicken. I think it was then that Rolf calculated my laps and thought I had 3 laps in the bank. I ran on, calculating... 3 laps x 2 mins = 6 mins = 360 secs. I had banked 360 precious seconds. If I slowed 5 secs/lap more than planned, my credit would last 70 more laps. 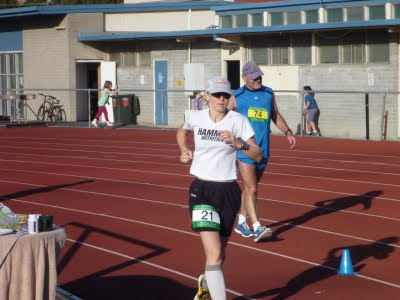 How long would 70 laps last? From there, my thinking broke down, as I was working so hard my working memory was struggling to do basic maths! I just went back to running as hard and steady as I could, focusing on my form. A few times I repeated the "Don't wish it were easier, wish you were better" mantra. It seemed to give me strength to not let the "course" beat me.

After 6 hours, I started receiving numerous text messages from my WA running mates via Rolf. They were all so helpful - I even had a local runner come down to the track on behalf of a running mate in Brisbane. I was in a tough patch then (mental parrot bush for all those rogainers out there), so it was all I could do to register the guy in my brain and feel thankful for the support.

After 7 hours or so, it seemed that many of my fellow racers started providing even more encouragement - I think they must have sensed my exhaustion. My right hip flexor tightened up badly, which changed my form and slowed me down. I had to 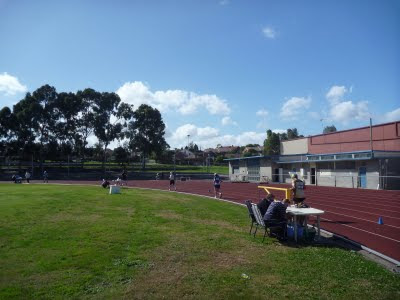 stop every 15 minutes to stretch it.

As I closed in on the distance, just after the 8 hr mark I needed to know exactly how many laps were left. Rolf started adding up his tick marks on paper to give me his best estimate, but he couldn't be sure he hadn't missed a lap or two. I must have sounded pretty desperate as I cried out, almost to myself, "Can anyone help me?" One walker I'd just passed called out, "Help you? You're doing brilliantly!"

It was encouraging, but she didn't know that I'd just spent 2 months specifically training, dropped a kilo of weight, and travelled to the east coast, to spend the last 8 hours running at top effort to get to that point. And darned if I was going to miss the record by a few minutes! Luckily for me, international athlete (and fellow WA'er) Mick Francis was standing by and just kept telling me to push. Then one of the great race helpers came out from the lap scoring area to tell me I was just finishing 240.

As I approached the target, the race officials came out to record official times for the laps preceding and following - in case there's a problem when they verify the laps for the record, they'll still have the correct official one. My laps right around the 100k were a 2 min 08 pace. It felt like a sprint, despite the fact that it was more like a 5.20+ pace!

So what happened after that?

Well, I took my planned 15 minute break to stretch and put on a long sleeved shirt. Then I went back out to see if there was enough left in the legs to get me to at least 121k in 12 hours (another Cdn record attempt). I was able to stay on pace, but after 5k my hip flexor re-tightened and I got a weird pain in one ankle that felt tendon/ligament-like. So I made the call to stop. It wasn't worth an injury, being greedy. I ran the race I set out to (well, 5 minutes slower than planned, but I'll chalk that up to all the unplanned hip stretches).

I said goodbye to all the hearty souls settling in to walk and run through the night. I left the track, but was unable to sleep. I got online updat 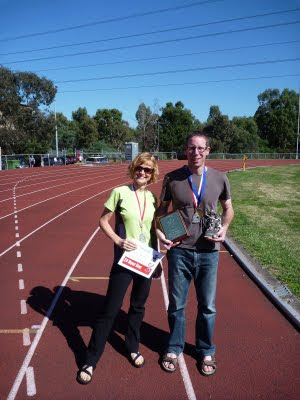 es as much as possible on the event's progress through the night. At 6 AM I finally fell asleep, waking at 9 AM in a panic to get back to the track - 1 hour left! We arrived at 9.50 to watch the heroes in the calm, sunny morning conditions, doing their best to finish their races strong. I wasn't the only one with a record from the day. I believe there was an M55 6 hr record set and two W40 race walking records set, 2 new Centurion walkers crowned, and many others set huge new PBs.

Just like me last year, the outright winner (Rick Cooke) at this year's National event had never done a 24 hr race before. He paced himself cautiously at the beginning and ran a beautiful race. He's an accomplished athlete in other areas (marathon, IM) and heeded advice from experienced ultra runners on his strategy. It was a pretty special day for him. And his massive blisters are surely helping him remember how special it was!

Oh, yeah, and a side note - apparently I may have hit my W40 6 hr record at exactly the same distance ... pending verification it looks like it was about 70.4k. That's uncanny. (Although I had planned to be there at 69.2 k and apparently still had my banked k's then). The bad news? Obviously I could run further in a 6 hr now and I'll have to do it again!
Posted by Bernadette Benson at 6:16 AM