This week was all about speed work. Speed on flat, speed on hills, think, eat, and sleep speed. Enjoying my new Fastwitch racy orange Tigger shoes, since my A3s wore out and I left them in Moe. I've noticed that the soles of the Fastwitch aren't as strong as the A2/A3 series, though, and they are getting chewed up by the few gravel tracks I've gone on. Very disappointing. So I'm rustling up some more A3s before they're all gone in the world.

I swapped my usual Friday rest with Saturday's run, so that I wouldn't have to run after being needled by the physio on Saturday (just tightens everything back up). That seemed to make today's (Sunday) run feel harder, though - having a rest day yesterday. I don't think I want to do that again!

Friday night I ran down to Challenge Stadium to watch a few guys I know race in a 1500 mtr. It was like being at the horse races. They shoot a gun at the start and have a commentator that calls out things like "Jim Smith is on the inside track with Joe Shmoe only 20 meters behind!" Makes it all sound very exciting. And they ring a bell as you start on your last lap. I think maybe we need some more excitement like this in our track ultras :)

So, to end the week today, it was the Butterfly Run: 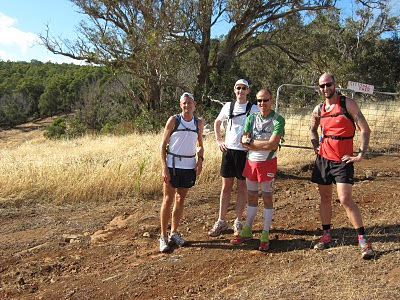 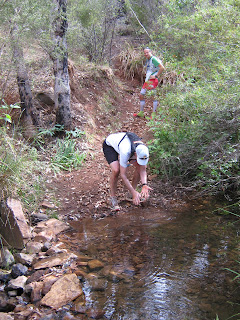 It was an easy paced 2 hour hill session at Wungong Gorge. No where else I know of that you can run in the bush and get nearly 600 mtrs elevation gain over a 16k run, unless you just sit somewhere and do a hill repeat. The monarch butterflies are out in full force. In one section it felt like we had to run carefully to avoid hitting them. We found the old WWII airstrip, too, which was cool. I'm plotting to do a fat ass race there in mid-February, sort of "Barkley Marathon-like" in methodology (the book thing) but rogaine style. That way people can choose their distances.
Posted by Bernadette Benson at 8:41 PM