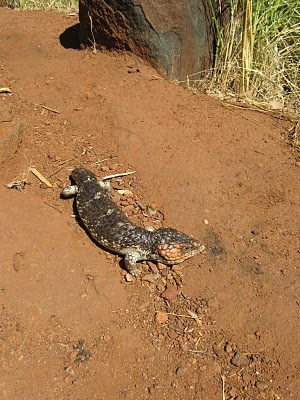 With it heating up to 36 degrees today, it's obviously just what skinks like, as we saw three of them during the 1.5 hr easy paced hill run at Lesmurdie Falls. Only covered 13k, which would suggest a really, really slow pace. However, today was meant to be about time, not distance, and not letting my HR go much over 160 on the hills. Also just spending some time in the heat to do a little more race day acclimatisation.

This place rocks on the hills-for-distance ratio. In 13k we got 463 mtrs! Fantastic! That's better than the Wungong run, even. Just that the park is a bit small for a long run, so you'd have to do some doubling up on tracks.

I figure it's time for another recipe - no treats this time - it's time to talk about day-to-day nutrition. Low GI foods consistently. And if a meal can't have chia in it, then it should probably have quinoa :)

Put everything except the cilantro into a casserole dish with a lid. Cook at 180 - 190 degrees for 20-30 minutes or until liquid is absorbed. Remove bay leaf. Stir in the cilantro/parsley.

Yum. I practically lived off this one in Europe this past summer (Euro summer, that is), as I found the restaurant food too full of fat. If you're a vegetarian in Europe, that seems to mean you're a cheesarian (cream-arian? lactarian?)
Posted by Bernadette Benson at 8:14 PM