The Shortest Race of the Year

It was funny when I realised it last week...6 Inch was to be my shortest race of the year. I was certainly pumped for it. Being heavily involved in the organisation of the event again this year was very time consuming, but it's something I'm passionate about. So it really is a joy. There was a great group of volunteers sorted for the event - many of whom are runners themselves - so it was easy to hand everything over on Saturday night and say, "Okay, now it's my time."

I tucked a bunch of carbs by the bed and slept/snacked from about 10 PM - 2 AM and then laid there until 2.45, when it was time to get ready for the 4.30 AM start. We packed gear and drove the 20 minutes to the start line, where we mostly huddled in the car because the wind was so cold (in WA that probably means it was 16 degrees but felt like 13, a relative thing, depending on your home country!). I was really pleased with this, as I knew that cool wind would make my goals so much more possible to achieve. 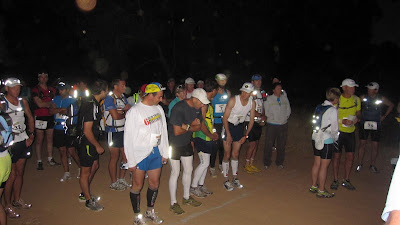 Over 80 of us headed up that big hill in the rising sun. There was an additional competition this year - King and Queen of the Mountain - first to the top of Goldmine Hill (maybe 200 mtrs in the first 1.6k of the race). I didn't care at all about that prize - I had my plan carefully mapped out and just ran as I planned to the sand line - first female. A nice bonus, but the bigger thing was to manage the next 45 kms. The race was broken down into micro components to me. I had 20 splits written on a sheet of paper in my pocket. I took a guess that I'd pass 5 guys over the course of the 46k, but it turned out to be 8. 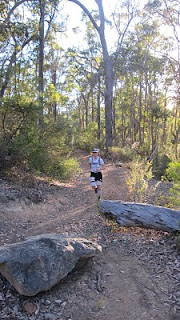 I ran on multi-hour bottles of Perpetuem, Endurolytes, and 1/3rd of a gel, which I had near the end for my final push. My shoes of choice were the brilliant Inov8 xTalons.

I was 2 minutes slower than my goal time, but I had underestimated (wilfully forgotten?) the size of a few of those hills in the second half of the course. As I hit the "1k to go" mark, I looked down and saw "4:11" and change on my Garmin. Ridiculous things come into one's head towards the end of a race, I find...for me, it was that I refused to go above 4:15 (my goal had been 4:13). So that meant an absolute total sprint (for me) in the last k in order to finish in 4:15:56.

That was good for 1st f (of 20) and 11th overall (of 79 finishers). I broke my former course record, shoving it back nicely another 25 minutes.

Post-race, I spent the next few hours helping out, which meant there just wasn't the time to get to meet others and to catch up with some I rarely see. That's always a bit disappointing to me. But I saw a lot of big smiles as people crossed that finish line, which was just so absolutely rewarding. Only two people had to make the wise choice to Do Nothing Fatal in order to save their knees.

Monday was a nice quiet day, spent running around the bush with a big broom, from start to finish, sweeping out sand arrows in the pouring rain. The course has been undone for another year. 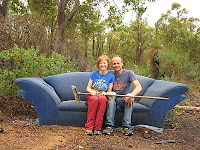