The Kep Ultra wasn't in my racing diary until about 10 days before the event. My plan after World 24hr was a month of recovery and then rebuilding. But after only running 100k in the mid-April event, I had fresher legs than expected and that bad taste in my mouth that a bad race can leave. It was a quick re-writing of a program to prep for the event!

Fortunately, I was privileged to be able to enter the popular sold-out race, having been a previous 100k event winner. I chose the 75k because I haven't run that option before. I like to do different races - though only 7km of the course is actually different to the 100k course, it would certainly be done at a speedier pace. So that's different, too ;)

It was a great feeling to be excited about and looking forward to an event. I hadn't had that feeling in a while. Though I try to keep those feelings tempered, as too much excitement can mess with my head.

I wrote my splits and nutrition plan gave it to Rolf, my crew. I wrote my affirmations down on paper and read them and thought of them regularly. I painted my toes. I wanted to write my "daring" time goal on them, but debated. Even though no one could see my toes, it would be there. Should I just write something more guaranteed? More safe? I paused with the permanent marker for a few moments. I thought perhaps of writing nothing and just leaving the "DARE" on the left foot. But it's not really daring to not follow through with that right foot, is it? So on it went, "6.30." A stretch, according to the number crunching science I'd done, but one that I could still aim for.

7 am start. Such a fresh morning that Rolf's vehicle gave him a helpful "ice possible" warning (in Perth, seriously? That car doesn't know where it is!). I headed off with the front of the pack at near a 4.30 pace. As we settled into the first 600 metres and the group spread out further, I counted the blokes making a gap ahead. 12. I wondered how many I'd catch after Wooroloo (43k). In the next km, two more blokes came past. 14. One of the 75k girls ran near me to the first aid station, Clackline, at 19k. We were a close group of about 4 coming in.

Rolf the one-man pit crew was ready. I dropped my pack and gloves and threw on the one he handed me. I called out, "In and out!" to the aid station vollies and was gone. I was on my split time and running solidly but still easy enough (no high heart rate allowed this early in the dance).

It's 24km to the next aid station, Wooroloo. 2 hours. Thus, I had to carry more water, which I instantly felt on my back. I dug into the joy that is a peeled pear, before getting back to the long-burning fuel of Hammer Perpetuem. Rolf was able to pop in along the trail at a few points to take photos, which he couldn't do at aid stations, as they're too quick and all hands are needed to negotiate caps, packs, and such :) 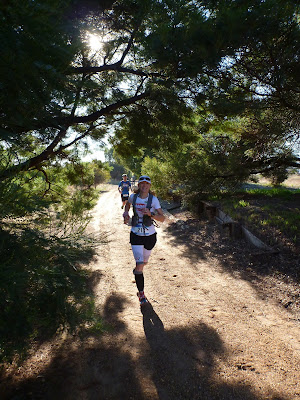 I hit Wooroloo on target. Always hoping I might get to bank a minute (just one measly minute) that could be a cushion near the finish, that minute couldn't be found. I'd wrung out tight splits! Any harder and I'd blow myself up.

Wooroloo was another non-stop transition. 1 hour 41 planned to the next checkpoint, Mt Helena. But the increasing heat of the day meant I needed the same amount of water as last time. There's a long insidious climb from Wooroloo for 6km. In 2012, that's where I passed 3 runners who'd gone out too hard. I caught a few around this area, but they pretty much stayed with me the rest of the race. There were many well-paced people out there.

Until Wooroloo, I really enjoyed the scenery and terrain. Though a fairly flat race (600m in 76k), the low hills still eat you up because you're trying to run fast. After Wooroloo, the track widens and straightens for much of the next 19km to Mt Helena. It's a mentally tough section for me. Having Rolf appear to take photos made it easier to find joy :) The pace and heat made for a delicate focus on my nutrition, as the edge of nausea tried to toe its way in to my party.

All the aid stations were abuzz with spectators and crews. The cheering and encouragement was fantastic. I ran through Mt Helena 4 minutes off pace. Crap. I did my usual, "In and out!" call and one of the aid station crew chased me down because he needed to check a piece of mandatory gear - my mobile phone. I slowed, pulled it out, and held it up. I didn't even register until several hours after finishing and a girl told me it was the funniest sight - a bloke in a huge sombrero sprinting after me down the trail. I hadn't even really noted the sombrero until she said it!

I knew there was a 3k slight uphill grind in loose pea gravel out of Helena. And it was a grind, yes! It was warm and my legs were cooked. My quads were ready to be done and exerting on the uphill brought my heart rate up quickly. In those 3k, my pace fell 30 seconds off the plan for this 7k section. I wasn't going to make up for all that with the 4k little descent. But I did claw back enough to make it only a 17 second per k net deficit. But now I was 2 more minutes off projections. I had 34 minutes to run 7k of slightly downhill weaving trail. Not gonna happen. But what COULD I do?

Push. Experience from track running with Masters Athletics has really helped me learn how much I can push and how early. I pushed as hard as I could, running that delicate dance of exertion to avoid nausea or bonking. I had to keep the fuel going in, but not too much. I didn't bother looking at my pace for 3k. I knew I was doing my best. Then I looked. 5.14 pace. I was clawing some back! Push. More. Dance with exertion.

1k to go and I ran into a group of 8 out for a relaxing walk on the single track. "Excuse me, racer! Excuse me, sorry, racer!" I darted back and forth like a moth on a light. The last 500 metre climb came and I switched my Garmin to overall time. I watched 6.30.00 tick over. Okay, fine, but what COULD I do?


According to my watch (still waiting for official time), 6.31.22. A 5.05 pace for the last 7k. I also finished 5th overall, as it turns out I had passed several guys at Wooroloo and Mt Helena aid stations without knowing.

Now, known for some crazy recoveries, I'm about to board a plane (short flight) to Indonesia to climb a 3,100 metre volcano. I've been in compression this whole time :) Poles are packed!
Posted by Bernadette Benson at 4:25 PM