Chance has little effect upon the wise man, for his greatest and highest interests are directed by reason throughout the course of life - Greek philosopher Epicurus ~300 BCE 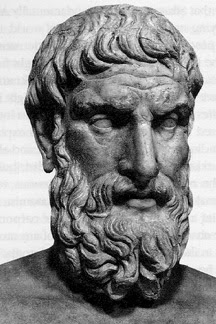 Yesterday morning, the day of my eye/nose surgery, a timely blog post appeared in my email inbox. Penned by Karl Hoagland, it was on the topic of fate vs destiny, particularly in relation to ultras. He tried to describe a subtle difference between the two, saying fate is:

...what happens to you. It's the cards you are dealt and the path that circumstances, family expectations and peer pressure send you on. Fate is the route that is well traveled, grooved and most of all - seems safest. But the reality is that the safe path is the most dangerous of all, because it can keep you from living your life to its fullest and happiest potential. Making difficult decisions and choosing the difficult path always entails risk, hard work, embarrassment and pain.... Listen to your gut and your heart when facing the big decisions, and choose your destiny. 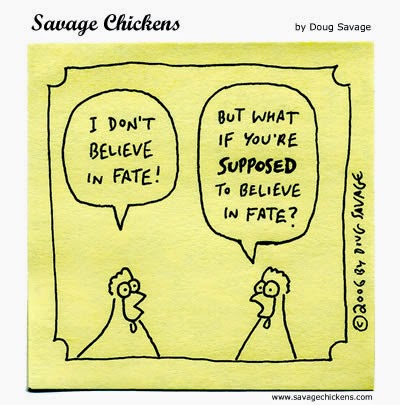 The trouble with the article is that he didn't clarify to me how one can choose their destiny (but not their fate), when the definitions of both offer the other as a synonym. Though in common usage, destiny is more often used in a forward-looking context - it's more often used to indicate a future event. A positive future event. Whilst destiny can be interpreted in a "fatalistic" way, that's more so the case for fate. Fate pretty much says what's arisen was predetermined and is thus out of our control. When something bad happens, we tend to say it was "fate." When something good happens, we're more likely to say it was our "destiny." Perhaps this gives us an easy way to cope with the bad things in life ("Well, it wasn't my fault, there was nothing I could do, it was fate.") Yet, we can take all the credit for the good things in life ("It was my destiny to land that job" - implying some kind of inherent giftedness.)

So, going by Karl's article, watery eyes was my fate. It was something that just happened, getting worse and worse over the past two years. It's impacted my running, such that in cool and/or windy weather, tears stream down my face. My eyes get sore from the constant wiping with a cloth and I can't run with any kind of speed and confidence on trails when it happens. Even on cool mornings whilst indoors, my eyes can rain for hours. Blurry vision makes it hard to read the computer screen.

Thirteen months ago I had my first eye surgery - a less invasive (but still under general anaesthetic) attempt to fix my problem. It was five days before the Coburg 6 hr race. It didn't work and we were back to the drawing board. Trying to time such things to work with my training and international travel added to the challenge of making successful eye surgery my "destiny" over a watery eye "fate."

Although I wanted the surgery before World 24hr Championships last month in Italy, I was concerned about it being too close to the race...AND they wanted me to go off my Udo's Oil! (a blood thinner). That wasn't gonna happen in peak training.

My race calendar currently has a lot of space in it. I'm looking to fill it, but may need a month to see how this surgery pans out. I now have holes drilled through bone to connect my tear ducts to my nose. Bigger gutters! Here's hoping! If nothing else, I will find a new career as a professional mourner or develop my party tricks.

And whilst on the topic of fate vs destiny.... It's time to talk about Worlds. Heavy sigh.

I found Karl's article timely considering my World 24hr flop. I'd like to say "disaster", but I'm trying to stop catastrophising :) given that it's "only a race." It's just that this race included an investment I calculated at 30 hr/wk for training time. Concordantly, I decreased work. Thousands of dollars not earned and thousands of dollars spent on the travel. Favours requested of mates and my partner, all to help me achieve my goal. But there's the rub.

The rub was that the 2015 World 24hr race was not my goal (my "destiny"), but my fate. By virtue of running 238.261km last year, I earned myself a spot on the Australian women's team. And everyone expected me to go. Circumstances, expectations, and pressure. I told everyone I didn't want to go. For eight months I told everyone. Expectations and pressure continued. I waited for the mojo to come. It didn't come easily. But if I was going to go, I was going to do everything in my power to make it worth my while. I researched more 1%'ers to use in training and recovery and wrote myself a minimum 240km plan (an achievable, not pie-in-the-sky plan). There would be a small PB and depending on which ladies toed the line, just possibly a medal. Admittedly, the medal didn't provide me much of a carrot, as most people thought it would. (If medals motivated me, I'd be picking lots of small, obscure races where I could almost guarantee a win.) 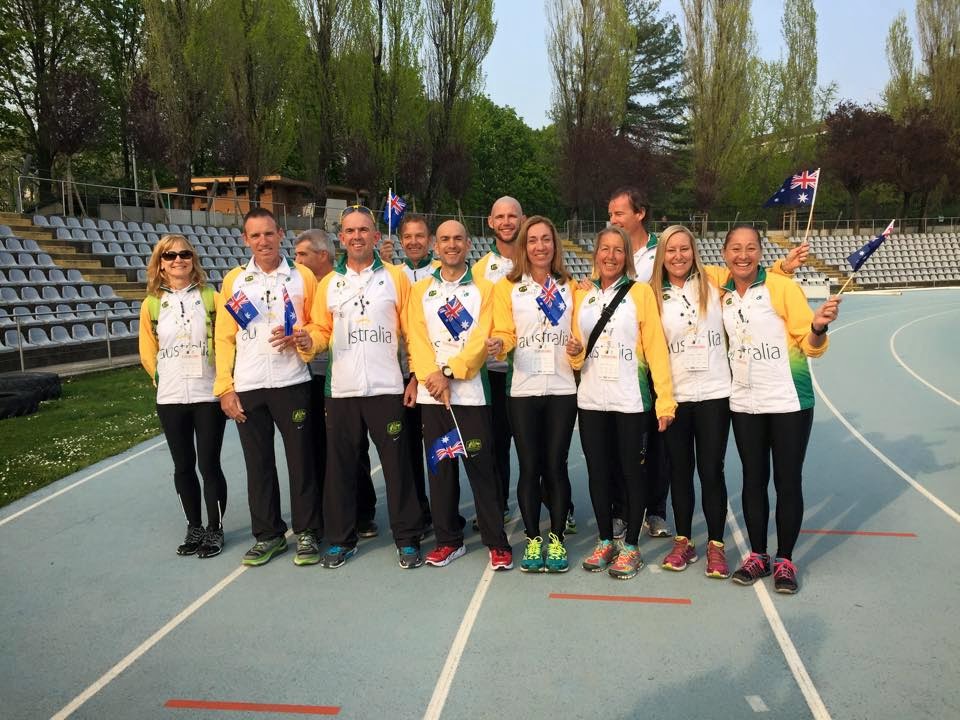 Arrival in Torino was good. In my view, the course was an excellent 2km loop (excellent as world champ events go). I was sleeping well (crap bed, but I padded it to mat the springs sticking out). I adjusted time zones quickly. Resting heart rate (HR) was down. I was foam rolling and doing my pre-event runs as normal.

Race day. 10am start. All good. Awesome spring weather. A touch hot mid-afternoon - around 20C - but given I'd just come from summer and many were coming from winter, I figured I had an advantage. A sponge station was available.

My first oddity was 2hrs in. I had a feeling of plugged ears and was running along trying to pop them. I thought, "How odd. We're only at 300m." About 4 hours in, the next odd thing happened, which I didn't associate with the first. I felt a dry, burning, scratchy throat that made me want to nose breathe. It's something I often feel after 20 or more hours or running whilst mouth breathing - not 4 hours. Overall, I still had a jig in my step and did a happy dance for Rolf as I passed the crew area for fuel. After scaring us with terrible tacky music (We Are the Champions, Eye of the Tiger) at the parade, they had quite agreeable modern music going when I ran though the stadium every 11 minutes or so.

Around 7 hours I started to feel a general malaise that I couldn't put my finger on. Rolf recorded a sad face in my program. HR didn't feel high. Nothing "pained" me. I wondered vaguely if it could be heat, so tried sponging more.

Then the lymph nodes in my throat swelled up. It became very hard to swallow. My breathing became laboured in a strange way. It felt like I couldn't get a deep breath. Like I was breathing only into my neck, but the breath wasn't going right down into my lungs. Is that how asthmatics feel? I was at 76km, just above my target for the 240k plan. But I felt like I was starting to work too hard to keep it - too hard for this early in the race - with restricted breath and throat restriction and difficulty swallowing. The shallow breathing must have been reducing oxygen to my muscles, hence the feeling I was working harder. 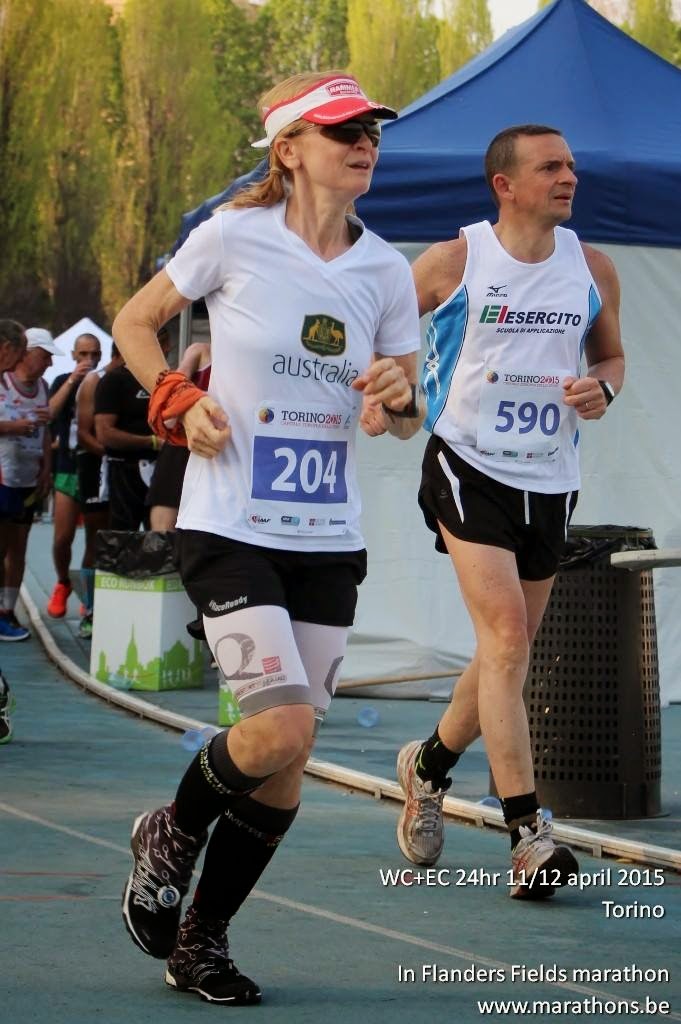 Much as I dislike taking pills, and felt it unlikely to work in this case, I tried paracetemol for the throat at 7.5hrs. It was a big event with a lot put in by so many people. And a great course in great weather with my best crew! The pills took the worst of the throat pain/swallowing problem for an hour or so. That's it. Then it was back.

At 9 hours, I saw the writing on the wall. At 9hr30, I came in shaking my head in the negative. I felt the great sobs of disappointment rise and I found a nice corner tent wall to have a semi-private moment with. After a talk to the team manager, he asked me if I could still run, but a lesser distance than planned.

My mystery virus with its swollen glands, sore throat, short breath, and headaches, lasted over a week. Rolf had it, too, only with worse headaches and a sort of vertigo at times. When I second-guess whether I could have run more/better and gave up too soon, I remember the "easy" run I tried to do with mates two days later, where they dropped me running a 6.30min/k pace mainly because I couldn't breathe. Walking up a hill with my mother-in-law, I was more out of breath than her (no offence, as she's a fit swimmer, but hills are my thing!)

But the physical illness turned out to be nothing compared to my "mental" one. In going to World 24s, I had let fate dictate my choice and when the consequences were tough, it hit hard. Coping with the disappointment, both personal and to the team, has been painful. I've had competitions go wrong before. Commonwealth 24hr 2011 I had to stop with what turned out to be anaemia. Lost Soul 100k 2014 I got a cold after international travel. But I coped with those and I think it was because they were targets I had wanted. They were my dreams. I could dust myself off and look at how to fulfil that dream again - or in another way. This time, I had tried to fulfil others' dreams and when it failed, I didn't know how to dust myself off and find another way. I can't see it from their eyes because I'm not them.

I've always said that as long as you can take away some learnings, you've made something positive of an ultra gone wrong. I have three. One is that I have more 1%'ers for training and recovery, including Hammer Race Caps Supreme. Two is that with my dodgy immune system, I will have to start wearing a mask on planes, I expect. Three is that I need to have the courage to make the "destiny" choices. Not everyone will agree or understand. But ultimately, I'm the one living with the consequences. I have to choose my own personal journey. I still hope to inspire others to create, fulfil, and live their own dreams, but it has to be in my own way. I can't inspire from a place that isn't authentic.

I let myself go down the path of World 24 2015, seeing it as the path of least resistance. It turned out to be the opposite! 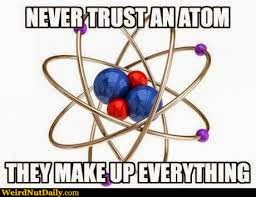 Fate or destiny, I don't know that I'm much of a believer in either, really. I think I'm more epicurean. In the traditional Greek philosophical sense, not the new-age "gourmand" misinterpretation of the term. The past is a combination of atoms, whether those belonging to beings or weather patterns or rock formations, that interact to create a "now." Then, as I think Epicurus would say, we need to apply our reason to "now" to help engineer the future flow of atoms in a way we'd like. At least some of them :)


Posted by Bernadette Benson at 5:12 AM