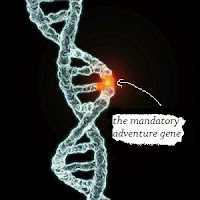 I have this need. I need to do things that are somewhat mysterious. Unknown. Sometimes challenging. It's a special gene I have, the "Mandatory Adventure Need" gene. If I don't let that gene express itself periodically, I find myself agitated.

Last weekend I had to do some work in Geraldton, 5 hours north of Perth. I stayed in a youth hostel. Not because I'm broke (though the cost savings were nice). But because it was a little adventure. It was a really cool old building that I thought might have been a brothel in days-gone-by. It was on the ocean and the patio was lovely. I was surrounded by mostly young travellers from around the world, on adventures of their own. There was an orange cat. It was a good vibe.... Though I much preferred running along the ocean and finishing my Scott Jurek book in my room Saturday night over downing a bottle of rum with loud music on the patio!


On my way back from "Gero" (ahhh, the Aussieness of words!), I took a different highway (for more exploring). I stopped at Yanchep National Park to do a little more adventuring. I needed a long run. There was a trail I'd wanted to check out for 3 years - the "Yaberoo Budjara" and no one would ever go with me! (I think I understand why now - keep reading).

I thought no one ever wanted to do it with me because I'd heard it was sandy. That, and the "unknown" component of exploring a new trail throws most people off.

I arrived ready to run at 2.30PM. That gave me 3 hours of sun. I didn't have a headlamp with me. I had just enough fuel for 3 hours (2 Hammer solids and 1 bag of chewys). But I was starving at the start.

I headed out with no exact plan and found several beautiful km of trail, some dirt and mud, some coastal dune-type terrain. I devoured much of my fuel within 45 minutes, having started hungry. Then I realised that somewhere, I had dropped one fuel packet! Things were going to get more interesting.

I debated the pros and cons of running the entire track and hoping to hitch a lift back to my car at the end. I decided it would be easier to just do an out-and-back. Of course, that meant seeing as much track as possible before turning around!

Fortunately, I got slightly lost around 10k. The trail is not that well marked after the first 5k, especially at junctions. I didn't know I was on the wrong trail at the time, but the fortunate thing about it was that it ran right near a highway and my eyes caught a servo through the bushes. Score! I bolted out of the trees, ran across the highway, past the 6 cars queued for fuel, and filled my pockets with biscuits and bars. Then I ran back across the highway straight into the bushes, leaving everyone there with confused looks, I'm sure!

At 15k, with 1hr40 on the watch, I forced myself to turn around. I now had 1hr20 to get back before dusk. And I'm not doing speed work because of my recovering hammy. Of course, I saw another parallel track and had to try that one. I still didn't know I wasn't on the real trail, but was continuing to enjoy the explore. Coming back out at a road crossing, I spotted a sign for the real trail! So I ran back another 100 metres on this great looking single track, agonising over the fact that I'd missed this section and didn't have any daylight left to go back again!

With 5k to go, dusk hit. The last km was run in the dark and the last 500 metres required a bit of help from the Garmin map screen to find my route back. The bush was wide and sparse here, so not easy to see a trail. I loved it.

So maybe I know now why people don't want to come with me on "Explores!"

This weekend's adventure was the 24hr "Take Nothing for Granite" rogaine about 1.5hr south of Perth. It was to be Rolf's first 24hr event, other than crewing for me for 24 hours.

We got a rumbly start as we verbally duelled over route selection (we're both very headstrong and good at being right). Heading off at 12.00PM sharp, we spent the next two hours in a confused, frustrated state of mind (a.k.a., almost coming to blows) because we kept missing the controls by over 100 metres on my bearing. We were using contours to figure out where the control was. Then, the answer came to Rolf.... We were wearing our new UltrAspire packs with a glitzy little magnetic pouch. Every time I happened to bring the compass close to my chest, the magnet pulled my needle off 20 degrees, causing me to bear left without realising it! We tried walking with our arm outstretched, but that was annoying. Within an hour, we'd decided the magnets had to go, so I pulled out my knife and we performed minor surgery.

The next 4 hours were awesome. It was warm and we were landing on the controls perfectly. My bearings were on and Rolf was learning to read the contours of the map, keeping us in touch with the terrain as we ran and power walked through the forest. Then, just as dark hit, we missed a control on a spur. That sucked because this rogaine was extremely tough. It was set with the State Championships in mind. It was all forest, so there were almost no handrails or attack points (fixed points like roads, powerlines, fences, dams). It was what the good guys called "an orienteering course." There weren't many hills, either, so even reading the contours was especially tough. So once you missed a control on this course, you were in fairly big trouble. We wasted 45 minutes looking and then finally decided to bear south to a gravel road. From there, we bagged another control and aimed back northwest directly on to the one we'd missed - from another angle, we'd have to find it.

Nope. Another 30 minutes gone there. We took a bearing due east and aimed for a minor track (they were quite unreliable). We then struggled to find the next control, without a proper bearing or clear knowledge of where exactly we were on the map. Then two lights approached. Before we could say a word, one called out, "Please help us. We're lost!" The couple was a mixed super vet team (both over 55 years, but the older of the two, the woman, was actually 72). They had been lost for over 3 hours! They were both experienced rogainers, but didn't plan to be out after dark (had minimal lighting) and the lack of features and handrails on the course made it too tough for them to get sorted. We spent some time talking to them, showing them their position on the map, trying to point them in the direction they needed to go. But the woman was quite distraught and basically pleaded with us to lead them the right way.

We started to take them in the right direction and had a whispered conference between ourselves. There was nothing else to do - we both felt the important thing was to get them to a patrolled road close to the hash house (start/finish). We took the easiest route possible, rather than the most direct. Rather than getting frustrated about the lost time, I decided I should accept it as part of the adventure. We chatted a bit, which helped pass the time, and helped me confirm that they were not hypothermic or hypoglycaemic. They were articulate and healthy (one turned ankle), just rather shaken from being so lost and alone for so long, worried that they'd go right off the map (then you won't run into rogainers or patrol cars at all and there are no farms out there, either). Down at the road, we parted ways, feeling confident they'd get the 2km back. I was inspired at that stubborn, strong 72 year old woman, hauling herself through the bush and over logs with the dimmest of headlamps in 8 degree weather, having been out there 10 hours or more. She is now on my Hero list. May I be that strong in 30 years. 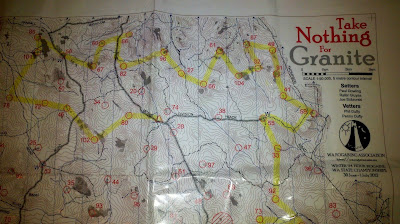 Off we went for the next 6 or 8 hours, through the cold clear night, with the temperature dropping to about 5 degrees and the dew soaking the bush. Rolf suffers from Raynaud's disease. It's a condition where the body constricts the blood vessels in the hands and feet when cold. How counter-productive, eh?!? I used to suffer symptoms myself along that line and always joked that the problem was I didn't have enough blood...so the blood is in my core to keep me alive and there's nothing for the fingers and toes. But people who really have it suffer badly. Rolf had merino wool glove liners and Polartec gloves over top. I dug in my pack and found one hand warmer, which he enjoyed on his more severe hand. His feet were in fancy Drymax socks, which he loves, but couldn't hold the cold at bay. It's a bizarre condition - the body shutting down blood flow to the extremities when cold! To cope, we started trying to bag just the controls near roads. That way we could run for a while, which warmed him up a bit. Then we would bush-bash to a control, which was slower going and therefore colder. Then back to the road, where he could run again and try to get the pain out of his extremities.

Finally, at 5 AM, the coldest part of the night, Rolf had to make the call. His feet had gone from painful to numb to excruciating. No amount of running was getting them warm again. We headed for the hash house, both very frustrated. We sat around the hash fire with a bit of food, watching the sun rise. Then we hit the tent, which I had set up in anticipation of a nap before driving home later that day. We were up a few hours later to watch the 24hr rogainers come in. Rolf even offered to go out again to get another control before noon...but his feet were all swollen and had funny yellow patches of colour on the soles. When I said no, he then admitted that his feet felt like he was walking barefoot on a sharp metal slatted footpath with every step.

Despite all our disasters and being on the course for less than 18/24 hours, we still finished within the top third and were 3rd "mixed vets." That's all right. A PB in distance for Rolf (over 60k) and time on his feet (18hr) and a great chance for him to trial a bunch of things for the Transalpine Race. Fortunately for him, we'll get more chances to trial cold weather survival with the trip to the Canadian Rockies coming up!
Posted by Bernadette Benson at 6:40 AM