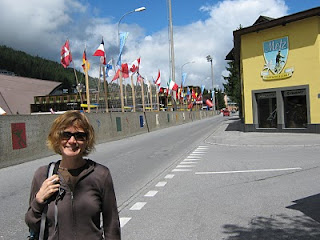 After two days of altitude acclimatisation in Malbun, Liechtenstein watching the marmots on the ski hills, it was off to Davos, Switzerland.

I knew this was a big race in Europe, but was still amazed when the numbers started to settle in … 7 events, ranging in length from 11k to 78k (plus the kiddie events). I don’t know how many starters there were, but there were nearly 5,000 finishers for the various events. Big numbers are pretty common in road marathons, but not common in the ultra running scene, especially in trail settings! The expo ran over two days and included a free “mini-medical” where I got things like my max lung function and body fat measured (I’ve been curious about my body fat – it’s 12%, exactly where I’d want it to be).

I had a bit of trouble motivating myself for this race. I had put the 78k out of my mind, with the intention of focusing on the Barenfels race. But after that one fell apart, I had to plan a quick recovery and re-engage my brain for an attack of the Swiss Alpine 78. I was incredibly fortunate that my former massage therapist (actually a brilliant physio) from Perth had moved back to Germany in January and was able to provide a bit of treatment for me. It was uncanny that she even turned out to be in Davos during the time of my race, as she was with the German national triathletes on a training camp.

It had been rainy and cold all week in Davos, but on Saturday morning the skies wer 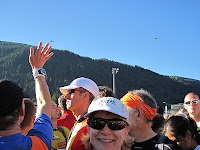 e clear and the forecast was 19 degrees at the start/finish (1500 mtrs) and about 9 degrees at the top (2632 mtrs). I think the coldest part of the day was actually when the video helicopters would swoop in close and blow gusts off their spinning blades!

The 78k is a big loop, starting in town with about 6k of bitumen before heading onto gorgeous forest tracks. The alpine climb starts about 30k in, after a descent to 1000 mtrs. The total elevation gain/loss is 2260 mtrs.

For the first time that I can remember (including my few little 5k races!), I ran without a hydration pack. There were about 20 aid stations and I noted that the fastest ra 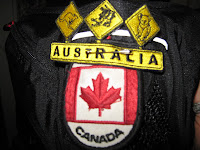 cers from previous years all ran without packs. I did wear a little waist pack that held fuel and electrolytes, labeled with my "don't-speak-German" badges.

As usual, I was all kitted out in the Dirty Girls and the Compressport and chose my Inov-8 x-talons again. Injinjis, as always. All the gear choices were perfect. Oddly, it seemed to me, although Compressport is a Swiss company, no one I saw was wearing the product. There were a few other brands around and I spotted a few racers throughout the morning with “compression” gear around their ankles. Can’t be very effective if the stuff doesn’t even stay on your calf.

My run started well. At the 31k checkpoint I was 15 minutes ahead of plan and in 11th place (for women). By the top of the mountain

at 52k I was about 38 minutes ahead of plan but had dropped back to 18th place, obviously finding the big climb in the thinning air pressure more taxing. I had no idea of my placement during the race, however.

Then I encountered an unanticipated glitch. The next 8k’s were gnarly single track along a ridge over to Scalettapass. It was a gorgeous view, but the single track was really technical and narrow, with quite the drop off one side! With hundreds of competitors, that section became a walk at the slowest person’s pace. My frustration mounted as I watched my “banked” time getting eaten away. Then a few men and women passed me – being much more forceful and daring along the cliff edge.

Finally, with about 2k to go in that section, I started to do the same thing. I took on

e guy with me – a Spaniard, I think he was – who was also rather frustrated. We started a constant stream of “excuse me” and “passing, please.” By the time I made it to Scaletta, though, all my bonus time was gone. Then began a downhill push to the finish of 18 kms. The first 4 k or so were steep and rocky, but wide and totally runnable. It was a riot! I opened it up and felt like I passed about 50 people. No one passed me on that section.

I knew I had lost my dream goal of 8 hrs, but pushed to get back as far from 8h30 as I could. And I finished in 8hr22min, very pleased. In fact, for the first time, I felt a wave of emotion at the finish line, almost as though I was going to cry…amazing what chemical imbalances can do after running!

Final result was 15th/252 women, 6th in my age class. Overall, I was 153rd/1,484 finishers. The top three women were from Switzerland, with the top 10 also including a German, Swedish, and British woman. At least 5 of the top 10 women have done this race more than once and the winner this year is a former Olympic cross-country skier and has two previous wins under her belt. The winning female time was 6hr39 and the winning male (a 4x winner) was Swedish and did 5hr49. Just mind-boggling times for those top racers.

It was a brilliant event and I was honoured to be surrounded by such a group of athletes. The support for this race is remarkable. Running along forest tracks and up mountain passes, there were always spectators (including some day hikers) who clapped and clanged cow bells and shouted “Bravo!” and “Super!” (which sounds like Zuper in German) and “Hop hop hop!” (which means Go!). The children held their hands out to slap as racers went by, also cheering us along. I’ve sure seen that the support for athleticism runs 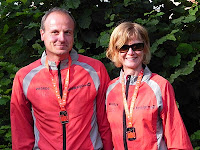 Now, it’s time for a little r&r (r&r can include adventure racing, can’t it??) before the plan to hit the Yurrebilla ultra in eastern Oz in two months’ time.

Posted by Bernadette Benson at 2:48 AM