More Support for my Ultra Adventures

Jon Tan at Langer Chiropractic, my chiro since moving to Perth 2 years ago, has agreed to help keep me training and racing well, with his sponsorship. I really lucked into finding Jon in the first place.... Knowing no one really to ask when I moved to Perth, I just noticed the sign while parked at a hardware store across the street.

It turned out that Jon has a real interest in sports chiropractic. He is the WA state coordinator for Sports Chiropractic Australia and the team chiropractor for the Subiaco Football Club (WAFL). He was also in the top 12 for Men's Health Man of the Year, so obviously takes health and fitness seriously for himself, as well.

And speaking of those ultra adventures.... 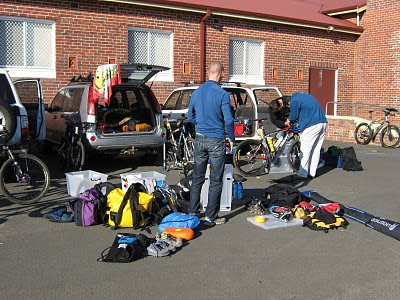 This past weekend was the Caffeinated Espresso 24hr unsupported adventure race. This was my third AR (1999 and 2006 in Canada). I was fortunate to be asked to join three very fit and nav-savvy guys for this. So the camera stayed in the car (figuring I'd never get in front of all of them to get a good shot, anyway). I'll have to wait until some pics become available online that I can get my hands on.

Maps were handed out after a 9 AM briefing and we had a noon start. From 9 AM until noon, you have to plan all your navigation for the event and get all your gear into 3 crates, labelled A, B, and C. The race organisers take those crates to the transition areas (TA's). If you mess up getting shoes or fuel into a crate, tough luck. So while Mark and Wil planned the route, Simon and I planned what gear needed to be in what crate and started sorting things. Simon and Wil have tons of AR experience and Mark has a strong rogaining/nav background. They taught me a lot over the weekend.

The race was something like this (I don't have the "passport"/road book):

This turned out to be a "mountain biker's race" and single track MTBing was my weakest skill. I have only ridden trails once in the past two years here. Of course, this month, after I signed up for the event, I went out three more times, two being in the dark. That was so useful! Western Australia is just full of pea gravel, which is so unnerving for me.

The paddle was my favourite leg. Full moon, gorgeous night. We were six hours on the lake, getting every mandatory control plus all the bonus ones (giving time bonuses). One was on a dead tree in the middle of the lake! The last 45 minutes or so we were out there, the mist came in. Within about 20 minutes, all sight of anything beyond about 20 mtrs was gone. We had to keep the boats very close together and navigate by bearing, very carefully, as we couldn't see any headlands to aim for. We were lucky to have been one of the faster teams, off the water at 4.30 AM. Others were just heading out when we left the water and had no idea what lay in front of them. One team apparently got separated within 20 mtrs of shore and it took an hour before they got together again (one boat heading back to shore while the other headed for the CP).

We squeezed onto the podium in 3rd place, after a big push to the finish, in just under 20 hrs (unadjusted for time bonuses).

The Hammer Perpetuem served me well again - I used multi-hour bottles so I could drink straight water from my hydration pack. I tried one of their bars, as well, for variety (it stays soft even in the cold, which is nice to know if you've ever tried to eat a hard energy bar). And I had a few cashews and almonds. I pulled up well, body-wise, but am still headed to the massage therapist now for a little post-race care! :)
Posted by Bernadette Benson at 11:28 PM