Over the last few years, I've enjoyed the challenge of shorter rather than longer races.

On the plus side, the race is over sooner, which means less toll on the body and quicker recovery. I've enjoyed the exploration in terms of training a bit more "sharply" and having to race near "red line" for effort, careful not to go over! I've also gotten to explore some new areas where these shorter races are held. On the down side, I guess, if there is one, it's that I can't be as competitive, given my age. But when I run my "regret-o-meter" for life, it tells me to "write my own story." I'd say I'm just me, doing "me", but I think it's more that I'm inventing me as I go through life!

The Sierre-Zinal is a 31km point-to-point race from the town of Sierre at the bottom of the Val d'Anniviers in the French-speaking canton of Valais (Wallis in German) to Zinal, at the "top" of the valley (for cars, at least). The start elevation is 570m and the finish line is at 1680m. But you go up much more than that! The race has 2200m up and 1100m down. Most people describe it as a race in three parts. First, there's the big climb to Ponchette (~7.5km + 1370m). There's pretty much a VK in there (Vertical Km, which is a race that covers D+1000m in less than 5k). From there to Hotel Weisshorn (20km) and Nava (the highest point at 2425m/24km), there's still climbing, but there are more undulations. It's considered "fast and flat" ... in a relative way! From Nava, at 24km, the course starts to drop nicely towards Zinal. Then you realise Zinal is right below you and you still need to lose another 400m. It's a near vertical descent at that point.

The fastest men run just under 2h30 and women just under 3hr. I calculated sub 4hr for myself, with a slight possibility of 3h50. I do my calculations based on my running and racing history, considering elevation and altitude. I used some uphill 9km-12km mountain races and the 49km Matterhorn Ultraks race last year as guiding templates. Looking at the last 10 years of W50 results, it appeared that I could be contender for the age group win. But it just depends on who shows up, so all I could focus on was my own splits and effort level.

The race has a very quirky start. It's literally at the edge of a highway overpass - the bottom of the valley. They have a "touristes" category that starts in 5 waves, from 4:45am through 5:25am, in the dark. The "elites" depart in 3 waves between 10am and 10:10am. I was in the 10am wave. The night before the race my heart rate stayed below 40. I was super calm, because I told myself it was just a training run for Matterhorn Ultraks and given that the event is a Golden Trail Series race and World Mountain Running race, the depth of the field would have me a little fish in a big sea. Really, that's a thought to ponder, as getting all egocentric about any race really just limits my own experience and enjoyment in life.

A bus picked me up from my accommodation in Grimentz village, halfway up the valley, at 8.30am. How civilised. I enjoyed a relaxing bus ride down, down, down. Which served to make me less relaxed as it reminded me how much climbing was ahead! The start has a forested, rural feeling, being outside of town, which I enjoyed. And it was easy to find a "little girls' bush", too, and avoid the smelly portaloos and the queues in the sun. It was heating up quickly in the valley. I was surprised by the number of people doing warm up runs - especially in that heat. Nervous energy for some, I think.

I handed over my finish line drop bag, in which I had stashed shower supplies, clothes, Hammer vegan recovery powder, a 50CHF note, and my Android phone. I had wrapped the phone in everything. The volunteer took my bag and threw it backwards into a giant metal skip bin type thing, not unlike a centre footballer passing the ball back to the quarterback. I cringed.

10 minutes before the start, runners in the first block left their shady spots in the trees and started filing in. I dumped the 400ml of water remaining in my plastic PET bottle over my head and down my shirt, front and back, stifling the desire to shriek with the cold feeling. It was hot. I self-seeded about halfway through the block. There was a fair bit of jostling around me. Again, nervous energy.

Once underway, we were straight into climbing, but the road was wide at first, allowing people to start passing and spreading out. I get frustrated at people who pass me at times like this, when I later have to pass them back on the technical steep single track. But at the same time, I understand that they are presumably playing to their strengths - if they know they are fast on flatter terrain and suffer badly on the steep, they should capitalise on the flatter parts.

After the steep climbing, it took some minutes for my hips and calves to stretch and relax out so I could find something resembling a normal running gait. It eventually came.

This is a race where the "touristes" wear hydration packs, but only a few "elites" do. With 7 aid stations, there was water for me every 25-45 minutes. I was sure to take the time to drink two full cups at each aid station and also sponge myself down. I fuelled with Hammer Nutrition gels (had 3 of the 4 I took) and nothing from the aid stations but water. Except for that accidental swig of sugary "Iso" drink!

I had one quick near-cramp in a calf during the speedy descent and was really afraid the calves, especially my left, were going to cramp when I stopped so suddenly at the finish line. I had no idea of my position in the W50 category, but I was over the moon about my time - 3hr53. A medal with a bit of rock from the Weisshorn (one of the 5 4000m peaks at the head of the valley) was placed around my neck. 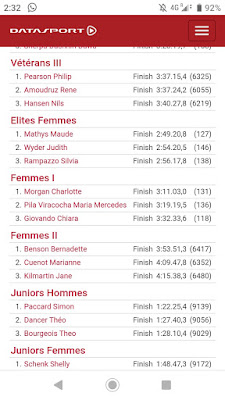 The race organisers have obviously seen too many runners screaming with calf cramps, so they aimed to beat it with their fleet of people doing calf massages just after the finish line! My left calf looked like it had a worm in it the way it pulsed. After that, the priorities were water, shade, more water, and slow walking to ease the calves back into complacency. I found my drop bag and dug out my phone. Best day ever. Phone was fine. I took it off aeroplane mode and set out to check online results.

I was surprised by my own reaction. Given the depth of the field and the short nature of the race, I thought I might expect to see my name below the top 3. I got a little teary for a moment as I saw my position - I did it! First in age group.

A full massage was available after a shower, but I ran out of time, as I had to get to presentations. The race ran tip-top from everything I could see in regards to drop bags, course marking, aid stations, and safety (I even saw a helicopter rescue), but there was no information available to indicate that they honoured anyone at presentations other than top 5 or 10 "scratch" runners. I had to ask two people at the "information" kiosk before they could confirm that I would be put on stage for the category win.

The entire presentation was in French and only French. It taxed my skills, but I heard "Femme deux" (Femme-II category) announced. I walked through an aisle of children waving Valais flags up to the stage. I've never heard "Benson Bernadette" said with such flair before! (They announced surname then first name for all, which tends to be the Euro way in writing, but not usually in speaking.)

My strongest memories of Sierre-Zinal include the steep descent into the finish, the way that man announced me at presentations, and being smashed in the face repeatedly as I ran the gauntlet of small children with paper flags! 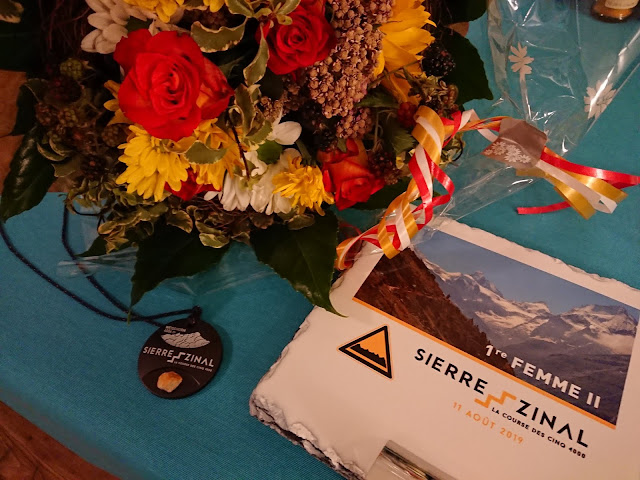 Posted by Bernadette Benson at 7:09 AM