The Godmother: 10 Years in Western Australia

I don’t know who first used the term. Maybe it was Shaun Kaesler, an ultrarunner and race director of several ultramarathon events in Western Australia. I have become known as the godmother of trail and ultrarunning in WA. Shaun even notarised it a few months ago via a lovely “valour” award for 2018 at his Lighthorse Ultra – for service to ultrarunning in WA. 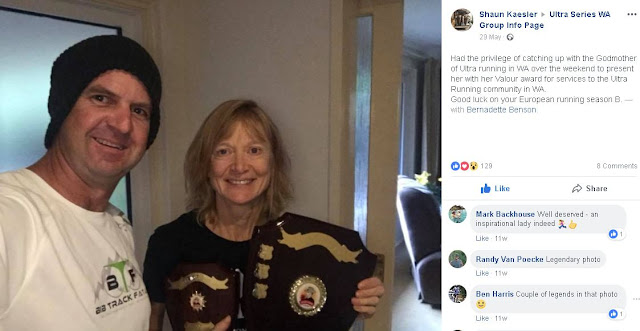 Though this race is definitely too short for me to obtain a top rank, it’s a race that really interested me. Two of my key principles for life are "Least Regret" and "Rush: Perishable" (these human bodies don't last forever). I don’t get motivated choosing races based on whether I might win. I choose primarily by whether I feel there to be a personal challenge - a feeling that the race is a journey of some sort. This race has so much character, the course has flow (even when it’s straight up!), and the Zermatt area is absolutely stellar. I’ll certainly race (live tracking link) to the best of my ability, that’s for sure. Bring on “near puke” running for 7 hours – I’m in!

Thinking about being 49 and chasing “kids” up mountains got me thinking about my “godmother” (not grandmother, I have to remember!) moniker. My 10 year anniversary in WA corresponds pretty closely to my number of years racing ultras, as well. Naturally, pioneers like to reminisce about the old days (good or otherwise).

So, with that in mind, pull up a rocking chair and I’ll spin a yarn or two….

I landed in Perth, the most geographically remote city in the world, on the last day of May 2008, as the recipient of an international PhD scholarship. I knew no one.

I remember trail and ultra running in WA when…

I remember when I could name every trail and ultrarunner in WA on my 10 fingers. It’s bittersweet that I can’t name even 1 out of 10 who cross the finish line at a trail running event now. But as long as the ethos is in all of us, we’re all still trail family. Keep looking after each other out there, WA, I've just got the matter of a 7 day stage race to attend to after Matterhorn and I'll be back! Well, there might also be a quick trip to China in October....

Posted by Bernadette Benson at 12:26 PM