It's Friday morning. At midnight, I'll start running the 100km Australia Day Ultra (road race) in Australind, Western Australia. It's the middle of summer. So midnight is a practical time to race. Unless you want Badwater training. I don't.

We just had the edge of a cyclone come through, creating a few days of extreme humidity. We had our first big bushfire in the area, which destroyed one of the Bibbulmun Track's campsites and resulted in air rescue for a solo multi-day bushwalker.

Since the Emu 48 hour attempt at the end of September, I've done my recovery and re-built base mileage and endurance. Recovery was surely hampered (physically, but not mentally!) by deciding on a 10 hour trot up to the highest peak in Slovenia (Triglav, 2864m). Microspikes would have been helpful on the icy ridge. The descent is what really totalled my legs, though! I developed some pretty bad knee pain that was brought on by very tight muscles. Thankful to have self-assessed well enough to gauge that I should go for a few brutal massage sessions, rather than thinking I just had a grumpy patella that simply needed "rest." It came good within a few days with massage.


Having some solid base again, I went to a parkrun on December 9th - 5k time trial. 20m32s. Well, that's good enough to work with, I thought. Time to start hunting for a race a few months out. But... I couldn't find a single race over the next few months in Australia I was really interested in (with entries available and relatively easy to access) other than the Australia Day Ultra (ADU) on January 20th. A bit too soon, really. I even looked abroad a bit, but having just returned from months overseas, I wasn't ready for big travel again.

A few years ago, AURA (Australian Ultrarunning Assn) amalgamated their road and track records (choosing the best of either surface as the record - removing road or track surface records for ultra events). At the same time, they decided a long-standing W45 "asterisk" performance by Lavinia Petrie (year 1992, 8.22.17) would be accepted and my 8.32.00 would be deleted. Their digging into history gave them sufficient comfort that her performance had been accurately recorded on an accurate course.

So, despite having a shortened speed work/sharpening phase - and it being the middle of summer - I decided the 100k was still the only challenge that would sufficiently capture my attention.

It sounds cheesy, but it's true: I'm mildly terrified. I've been quietly (I hope!) on edge all week. I have the voice in my head that asks why, that tells me I'm stupid, that utterly freaks out. I've got one mantra after another playing in my mind to counter it.

And though it seems to stress me terribly more often than not when I go into an event, I keep going. It's one of the best ways I really understand (at this point) how to approach mystery. I need to set audacious goals for myself. And then feel my way through the experience of the doubt and the fright.

Running. As I've said before, it's everything and it's nothing. Of all my mantras, I think the stickiest this time around is #bestdayever. Because with that one, I just can't lose. It's a mindset. 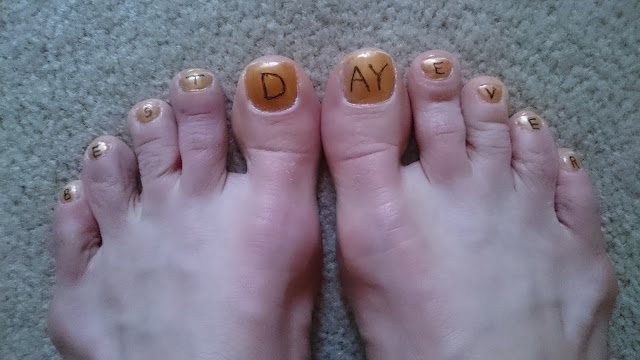