Breaking the Guinness World Record for greatest distance on a treadmill in 12 hours was in some ways a waiting game. Spinning, fueling, cooling, toileting, stretching...and waiting. It wasn't going to be until at least the 11 hour mark that we'd know if we were going to achieve our goal. 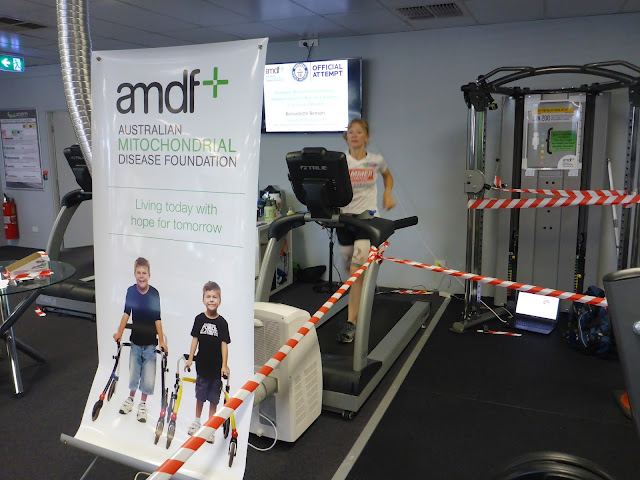 And any second it could all be gone. A momentary cramp, tripping over my own two feet and coming off the back would mean certain injury and end to the challenge. Losing power to the gym, an a/c breakdown, video recording failure, a witness not showing up... I tried to come up with Plan B's for anything that could happen. But still, we'd have to just keep working away, spinning, cooling, fueling, stretching, timing, photographing, and recording until we could see 118km on that 'mill.

Given my #yogafail broken toe in March and then giardia (if you don't know it, think "nonstop gut cleansing parasite") at the beginning of May, my top-end speed was off. But endurance was there, as far as I could tell. So I wrote a plan for 126km. If the planets aligned, I'd squeeze out a little more. The key thing was not to blow up in the first 6 hours. I had 20 minutes of time-off-treadmill allocated, but I hoped that I wouldn't need all of that. Indeed, the treadmill finished with 11:51:14, which means paused time for breaks totalled 8min46. The extra 11 minutes represented 2km's right there.

As usual, I fuelled on my reliable Hammer Nutrition Perpetuem, with peeled pear every 30 minutes. No nausea and no energy lows. In total, my estimates are about 250 cal/hr, with 90 cal/hr coming from pear. I used the palatability test to confirm whether to continue taking Endurolyte tablets every 30 minutes ("Do salty crisps sound good right now?" If yes, take an electrolyte pill).

Though there were no energy lows, there were mental lows. Of course. There were times I told myself I'd never race again. (Amazing how the brain can believe such lies!) About 4 of 12 hours were spent dug in hard at the "business end" of things, engaging in seemingly constant efforts at keeping my body happy. Mostly, it was an effort to keep cool enough. My poor crew! I developed a bizarre rule about misting me down with the pressurised plant sprayer. Usually I'd insist he start with my right shoulder, then I'd instruct him where he could spray next. The calves were usually last. At the time even I thought it was rather odd, but on reflecting, I think I knew there was a risk I'd get a muscle cramp in my hammie or calf if I had water sprayed on it suddenly. Between all the misting and the wet sponge I used, I looked quite the picture of drowned rat at the end!

Thankfully, there were no cramps. One of my biggest fears. Though on stretching once, doing high knee lifts whilst walking on the mill, I drove my knee right up into the console! Ouch!

In the end, there were revolutions of the treadmill belt totalling 128.62km. And we raised some awareness and funds for mitochondrial disease.

Was there a revolution in my thoughts on treadmill running? Briefly. For a short time, I resolved my fear and loathing of the mill. I thought I might almost like them. But a month later when I jumped on my trusty "Jim" for a 5 minute warm-up, all the old feelings were back. I was dizzy. It felt clunky. The evolution of the mill runner had come full circle.

It was time to gorge on trails and mountains for a few months.

Posted by Bernadette Benson at 6:56 PM