Running. It's all about the running.

Or is it? Or should it be? More and more these days I'm noting all these "non-running" things I'm doing that seem rather important to my running success.

In no specific order, here are some things I'm seeing as more essential than adjunct.

(1) Ice Cup Massage - paper cup of frozen water, peeled back bit by bit, actively icing whilst massaging. Has seemed particularly good for periostitis (shin splints), done after every run at a minimum. Done three times a day is probably better, particularly for nagging things like little tendons around the feet and ankles. Frozen water bottle rolled under my foot was incredible for the "Bib foot" issues and to help recovery after foot massages. 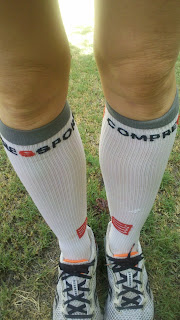 (2) Compression - calf guards and quad guards for the tired legs, whilst running or afterwards. To avoid over-use problems with the guards, like irritating a tendon around the ankle such as the peroneals or achilles, one can also use full socks. They don't have a 'compression' point like sleeves do if you're wearing them to the max on high training volumes. I have also found my periostitis shins like the full socks but didn't like the calf guards. As the physio says, "if it feels good, it's probably helping." Simple advice that makes sense :)

(3) Needling - The first time I was ever needled was out of absolute desperation, one day before a race, when I was in utter agony over weeks of tight calves that got so I couldn't run 3k pain free. I really, really, didn't want to be needled, but I was that desperate. The day after that physio treatment, I ran 75k with no calf issues. Needling with the physio has continued to be useful, and just a few days ago I was made into a particularly cute hedgehog :) Or is it echidna now that I'm Aussie? I still prefer not to look when she puts the needles in!

(4) Sports Chiro - So many people misunderstand what sports chiropractors do. I did, as well. I thought a chiro just "cracked backs," the sound of air popping between cartilage - not really doing anything clinically, but making a good noise. My first trip to a chiropractor when I was in my 20s in Canada did nothing to help get rid of the stereotype that it was quackery. He told me I had a leg length discrepancy (some people do, but I didn't - it turned out I had a tight hip rotating the leg up). He told me I should never carry heavy things, thought I might need a lift in one shoe, strapped me to some electric device and left the room for 20 minutes. None of it was workable solutions. I was a nanny - carrying small children was a day-to-day occurrence. I went to my GP who told me (in quite kind words) that I was getting overweight and out of shape and needed to go do some sit-ups. He was right. Years later, out of desperation again (another issue - I hadn't just given up on the core work!) I tried another chiropractor and she was awesome. It totally changed my view. Moving to WA, I was lucky to just "stumble" upon Jon Tan, who happened to be local in my area. He works with the state footy team and is a body builder type. When I see him, there's a lot he does that looks just like what my physio might do - checking hip movement and strength, the knees and popliteus, along with the back and neck. I run so much smoother at speed after his trigger point work. Thumbs of steel, just like my massage therapist!

(5) Yoga - Here's another one I thought belonged in the "flaky" pile. Then about a year ago I was running with a mate - one who might even be said to be a "bloke's bloke.". No risk of low testosterone in him. And towards the end of the 30k hill run in 30 degree heat he says he's going to yoga that afternoon. Well, that floored me. So, I tagged along. And I met this German woman who uses all those crazy terms like "utacambasa position" and "vajra warrior number 3 position" (I still just look to see what others are doing), but she also uses words I DO know, like "hip flexors" and "rectus femoris" and "trapezius." We stretch and strengthen for 90 minute sessions. Awesome for my back, hips, and hammies, particularly.

Of course, there are more...like dark chocolate ;)

Posted by Bernadette Benson at 9:38 PM