Putting on the Reading Miles 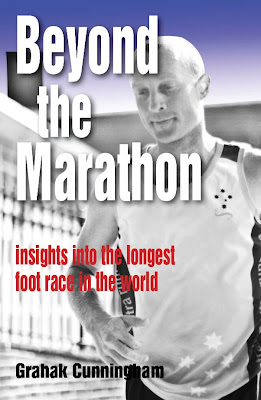 I've had a few quieter days to catch up on a variety of projects and that's also meant a bit of extra time to devour literature...mostly running-related. Waterlogged keeps getting pushed to the bottom of the pile, though I really do want to finish it. I got stuck into Grahak Cunningham's new e-book Beyond the Marathon. It's about his four (!?!) times finishing the Self-Transcendence 3100 Mile race. It's held every New York summer around a roughly 1 km block - over 5,000 laps to finish. Grahak, a fellow Western Australian, won the event this year AND set a new Aussie 1,000 mile record. Great book that I polished off in a day, as I found it very cathartic having someone speak about things that were reminiscent of my Bibbulmun run.

I'm almost through the Paleo Diet for Athletes and must say I have been somewhat surprised. From the sounds of it, his original book was meant for "sedentary" people and the rest of us should only read this one. He's right up on all the latest good science about things like post-run recovery carbs and protein, caffeine use for runners, electrolytes and hyponatremia. Really, his argument about diet is essentially that you should eat lots of fruit and veggies - something many people miss out on, opting for a lot of 'fast food' like muffins, pasties/pies, and other nutritionally poor food choices. That's a good thing. Of course, he also advocates meat as a protein source, particularly wild game (leaner, no hormones) and fatty, cold water fish. Those are generally good, healthy choices that most nutritionists would agree with. His proportions of protein to carb to fat don't sound out there at all to me (in THIS book, that is - perhaps if athletes have tried to follow his 'sedentary' plan, they've eaten themselves into a major carb-depleted state). 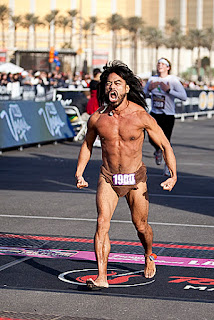 However, there are a few points I'm disagreeing with him on - at least one minor and one major. A minor one? That in a 24hr event you need solid food...there was no science put behind that statement, either. It's not my experience of racing and I have found no other data that says it's necessary for any reason. A major point of disagreement? The acid/alkaline food thing. I was trying to "ignore" his rant on this, as it covered a mere page in the first third of the book. But then again just after the halfway point he gets into it again and offers up the dreaded threat that comes with the acid/alkaline theory - calcium loss from the bones causes bone problems if you eat too much "acid-producing food" (which happens to include dairy/cheese, grains, seeds, and meat ... interestingly, he's okay with meat-eating, but just not processed/cured meats - how does that work?!?). I was almost tricked by this acid/alkaline thing, myself. It's pretty prevalent in the ultra and trail and health-conscious circles. But I can't find a body of legitimate research to support it. Quackwatch sums it up pretty well: "No foods change the acidity of anything in your body except your urine." Also, "...systemic pH is not influenced by diet" and some hometown researchers from my alma mater, the University of Calgary, compiled the literature in a meta-analysis that stated

This meta-analysis did not find evidence that phosphate intake ['acid producing' foods] contributes to demineralization of bone or to bone calcium excretion in the urine. Dietary advice that dairy products, meats, and grains are detrimental to bone health due to "acidic" phosphate content needs reassessment. There is no evidence that higher phosphate intakes are detrimental to bone health.

So, if you read the book, take a black texter to pages 95 and 175. He seems pretty well-researched, I'm sure he'll come to the party in the next edition ;)

On Sunday a good running mate lent me Be a Better Runner, which has a lot to do with heart rate zone training - this is something I've been a little more curious about lately. So good timing - except that poor Tim Noakes is being neglected again! And meanwhile my American Ultrarunning magazine arrived....

In training, I'm still taking lots of days off to heal, though yesterday's run tipped the balance a bit! My big announcement for today's training was that I did not cry.

That might not sound like much of a goal to achieve in a day for most people, but you need to understand...today I had my first private strength training session.

I told a very tiny girl that I wanted to try a strength program to target my arms/upper body/core, with the goal of improving my endurance for 24hr-type events. So today for the first time in my life, I used a kettle bell. And did a burpee (and torqued my knee, which put an end to those, thank-freaking-goodness). And a "clean and press." And all manner of other gym-like and weight-like things, in seemingly faster and faster succession, completely burning me out over a matter of several minutes. That was an odd feeling - when I'm used to pushing myself for hours and hours before exhaustion.

But although I felt a brief moment of panic on burpee-dead-lift number 4 and thought I was going to cry in front of that little girl, I did not and so for that I still have some pride intact. Even though my arms are like a T-rex and I have no explosive power. I thought I could still legitimately blame a bit of Kosci being in my legs yet - and the matter of that 3.5hr 29km mostly-sand run yesterday :) Well, that has nothing to do with my arms, but might explain the shattered quads and glutes.

Not sure what excuses I can work up for next week's session.


Posted by Bernadette Benson at 4:20 AM