Before You Were a Trail Runner, What Were You? 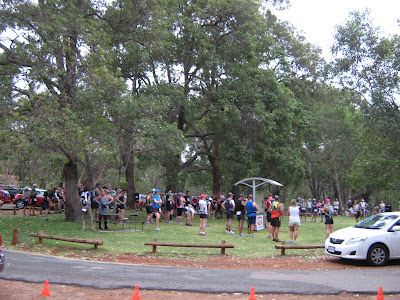 Yesterday, 131 people stood on the start line of the 3rd Perth Trail Series event. A race I called Snakes 'n' Ladders in vague reference to the location ("Serpentine" Falls National Park) and to the steepness of the hills, which might be better approached with a ladder!

For 3 1/2 years - since moving to Perth - I have run with a handful of trail runners. For one whole year I think it was essentially my mate Rob and I running together. People came and went, depending on their personal training goals. But we were lucky to ever have 5 or 6 of us out at once.

So, before the PTS racers were trail running, what were they doing? Maybe, like me, running for fitness, wishing there was something that would make running more enjoyable. Less like work. I stumbled across trail running by way of an email that came to me, telling me about a trail running group in the Rockies, where I came from. That first run - 15kms in snow and darkness, chasing 8 people who were much fitter than me - left me nauseous and limping. It was Type 2 Fun that grew into Type 1 Fun as I got more fit. 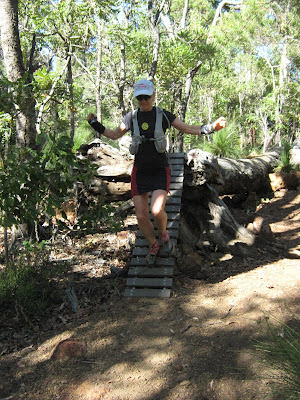 With the series being nearly a half-time job and all my other volunteer and work commitments, there's no way I could train at an intensity to compete right now and to keep my stress levels as low as needed to optimise training. So, I have to decide whether it suits me to try to have an "off season" from Jan-March so I can run the series in future years (if it's wanted). For this year, with my injury/recovery, it hasn't been a problem.
Last week's grand total of running was about 40km. This week I'm gearing for between 60-70, which is what I ran the previous week and the "Bib leg" held up well. Even after "accidentally" running 24.5km as a long run (trails being as they are, it's pretty hard to suddenly stop at 20.0km and say "Okay, guess I'm done here, that's my limit for today!"). Ali (my physio) continues to create good pain for my foot to get back my flexibility but Nathan ("hands of steel" massage therapist) trumped Ali's pain whilst working on my feet today, along with my low back, which seems to be suffering from too much sitting). I can honestly say I've never experienced more pain in a session. I know he'd be proud ;) Other progress includes the fact that I have lost close to 1kg of the extra weight I put on post-Bib whilst unable to exercise at my usual intensity. It feels noticeably better. I want to drop another 1 kg each month through to mid-May. That would get me back down to competition weight. Fast like a greyhound, ultra runner-style :)
I'm still going through heaps of medical tests for my mystery issues. Once I know more, I guess I'll say more. But I'm getting to google more new words these days!
Posted by Bernadette Benson at 1:19 AM