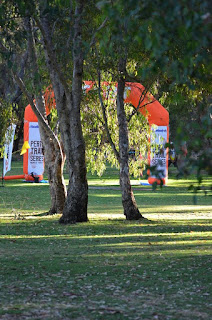 I emigrated from a country with too much winter. It's hard to beat the Rocky Mountains for trail running, but six months of running in snow and on ice, followed by a month of mud, got to be a bit too much for this little girl.
I scanned the world map and chose Perth for a change. What a change it is! Now, instead of surviving winter, I survive summer. But the tough bit is only 3 months instead of 7. And somehow mentally it's better surviving things in a bikini than a balaclava.
Perth can be a challenging place to train in summer. Finding the motivation to run can be difficult when even at 5 AM it can be 23 degrees. The heat and occasional bouts of humidity take their toll on pace, making it hard to achieve a PB for any outing.
That was a key reason for me creating the Perth Trail Series - a motivating way to keep some summer fitness up. 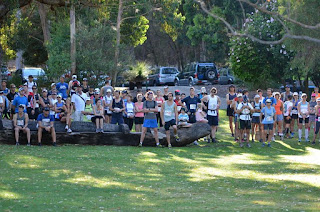 And a chance to introduce some more people to the joy of off road running. The first event - StayPuft - was a great success by all accounts ... all being the ones I'm listening to, of course ;) We sold out with 150 entrants and 129 made it to the start line at 7 AM last Sunday. Rolf and I got our training runs in by setting the 19.2 k course the night before, racing to beat darkness and the restaurant closing, which would have forced us to eat disgusting pies from the highway servo.
Then we got some more forced training in deflagging the course on Sunday arvo. I whimsically named the race after the Ghostbusters marshmallow man after setting the course primarily along what is called the Ghosthouse trail in this national park. 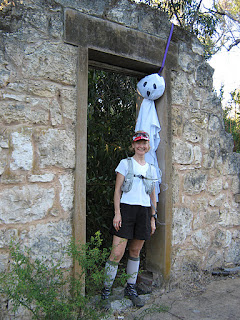 We even hauled a full length white sheet 5 kms into the bush in order to put our own "ghost" in the house. I admit he looked nothing like Mr. StayPuft!
Next weekend, we are headed to another national park for the 2nd race of 5 - shorter distances, but more hills. A rare thing, as well, we are alongside a river, which should make a great place for cooling down post-event.
Another summertime survival issue for me is eating. I find it hard to motivate myself to cook and hard to eat hot food. I'm always on the hunt for good summer recipes. Good meaning yummy, but also dead easy to prepare and uber-healthy. It's been forever, but I've squeezed out a bit of time to add a few new recipes to my website here if you're in need!
Posted by Bernadette Benson at 3:38 PM