When is a Race Not a Race? 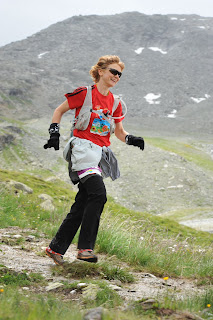 When it's supposed to be training.

On Friday we drove to St. Moritz, about 3.5 hours south, to do this short race. I made a bit of an excuse of it being altitude and hill training, but have since been reading more about altitude training and have learned it probably wasn't very useful in that regard.

Anyway, the race was part of the Alpinathlon - a 5 stage race with road cycling, two mtb legs, and two running legs. The last leg of the race is a 10.8k "run" up 1626 mtrs to the top of the Corvatsch peak. At 3303 mtrs, it's claim to fame is that it is the site of the highest race finish line in all of Europe. Participants were allowed to register for Leg 5 as a separate event this year, which was great for me!

Unfortunately, though, there was snow on Friday night at the top, so the race course was shortened to 8k. The finish line was altered to be at Corvatsch "Mittelstation" - the middle station - at 2702 mtrs. The race organisers decided it was too risky to have racers going across the glacier to the finish at 3303. We didn't even know the race was altered until 4k in! (A problem for me not being German-speaking, as I'm sure announcements were being made that morning and it was probably all the talk around the start line). 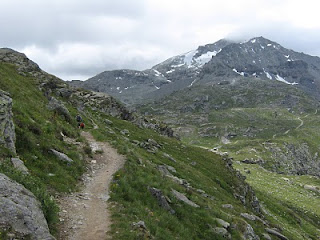 le bus (I was obviously grumbling a bit about having my training run shortened).

The scenery was fantastic and it was awesome to watch some of the full competitors coming in after 8 or more hours of racing all day through the mountains. It's so inspiring to be surrounded by all these athletes.

It was mentally much harder than the 24 hr Sri Chinmoy race, which probably sounds odd. What was hard was making myself start at the back of the pack and to jog and hike rather than run full-out. I had to keep reminding myself that if I want to run the Swiss Alpine Marathon (78k) the following weekend, I wasn't there to destroy my legs or endocrine system. I needed to keep it more moderately paced. But allowing myself to finish in near last place was incredibly challenging. I think it was good training for the mental side of racing - running your own race and not getting caught up in what others are doing ... the "ego" side of things.
Posted by Bernadette Benson at 4:11 AM